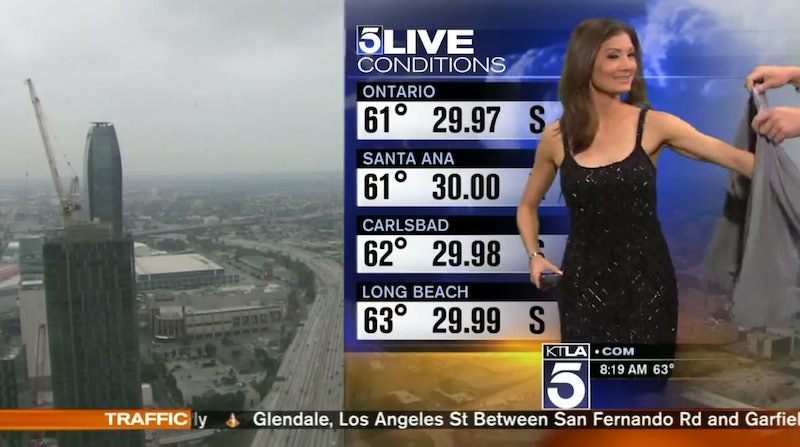 Los Angeles weather anchor Liberté Chan’s Saturday morning weather report got a big response from viewers — but not because of the forecast. The meteorologist was asked to put on a sweater during a live broadcast — that’s right, while still on air — because so many people were complaining about what she was wearing: A black, sparkly dress that — gasp! — left her shoulders and collarbone exposed. The uncomfortable moment sparked a barrage of tweets and comments from viewers, in what has since been dubbed #sweatergate.

In the middle of Chan’s broadcast for KTLA 5 on Saturday, a grey cardigan suddenly appeared on the right of the screen. “What’s going on?” she asked. “You want me to put this on? Why? Because it’s cold?” News anchor Chris Burrous replied, “We’re getting a lot of emails.” Chan put the grey sweater on over her black dress, saying, “I look like a librarian now.”

In a video that Chan posted to Facebook, she and her co-anchors look at some of the outraged viewer emails that prompted the cover up. One email read, “Liberté Chan’s dress is totally inappropriate for a Saturday morning newscast. It looks like she didn’t make it home from her cocktail party last night.” Another complained, “Liberté Chan looked like she stayed out late at a party and came to work in the same dress. Not appropriate for the morning weather report. The show’s producers should not have allowed her to do it in a cocktail dress.” (That viewer added, “Handing her the sweater during her report was also in very poor taste.”)

As her co-anchor reads the angry emails, Chan asks, “It's a dress people. Can we talk about my weather performance?” She also explains why she was wearing the black, sparkly dress in the first place (not that she owes anyone an explanation of what she chooses to wear, of course). She had originally intended to wear a black and white dress (which she describes as “very demure”), but it didn’t work with the green screen. So she changed into the black one instead. “That’s it, people. I don’t know why everyone’s hating,” she says.

Many viewers were offended by the sweater incident and took to Twitter to complain that the demand that Chan cover her herself was body shaming and sexist.

Burrous, Chan’s co-anchor, tweeted an apology, writing, “I completely understand meant in jest but I see how it seemed. I am sorry.”

For her part, Chan says she wasn’t bothered by the complaints about her dress. “I’ve worked on-air for 10 years and by now, I’ve learned that everyone has an opinion and you have to have a thick skin to work in this business,” she wrote on her blog. She also emphasized that she didn’t feel that KTLA had acted inappropriately. “For the record, I was not ordered by KTLA to put on the sweater,” she wrote. “I was simply playing along with my co-anchor’s joke, and if you’ve ever watched the morning show, you know we poke fun at each other all the time.”

More like this
11 Trends From The ‘90s That Made You Feel So Cool
By Julie Sprankles
TikToker Kate Glavan Has The Antidote To The “Hot Girl Walk”
By Alexis Morillo
Here’s What Sarah Jessica Parker’s Canned Cosmo *Actually* Tastes Like
By Emma Garza
What Is “Night Luxe?” Breaking Down TikTok’s New Aesthetic
By Courtney Young
Get Even More From Bustle — Sign Up For The Newsletter