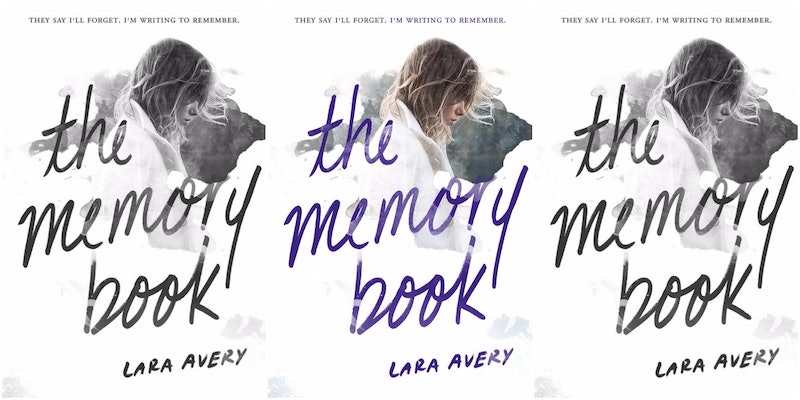 What happens when you slowly start to forget everything about who you are?

In The Memory Book , Lara Avery introduces us to Sammie McCoy, a girl who always has a plan. Her major goal in life? To get good grades, and book herself a ticket out of her small hometown. Sammie's determination never falters — not even when she's diagnosed with a rare genetic disorder that will slowly steal her memory and destroy her health.

Instead of giving up, she does what she does best — she comes up with a plan in the form The Memory Book. In the book, she writes notes to her future self.... a future self that doesn't remember anything about who she is or where she's from or who she loves or why she loves them. In these heartbreaking notes to the future Sammie, she writes about her first date with her longtime crush, Stuart, she details her falling out with her childhood best friend, Cooper, and she talks about her hopes and fears for the future. Through her writing, she discovers hope in a desperate situation and learns the secret to living fully and wonderfully.

The Memory Book will be available everywhere on July 5, 2016, but you can read the first chapter now, exclusively at Bustle.

If you’re reading this, you’re probably wondering who you are. I’ll give you three clues.

Clue 1: You just stayed up all night to finish an AP Lit paper on The Poisonwood Bible. You fell asleep briefly while you were writing and dreamed you were making out with James Monroe, the fifth president and arbiter of the Monroe Doctrine.

Clue 2: I am writing this to you from the attic at the little circular window, you know the one, at the east end of the house, where the ceiling almost meets the floor. The Green Mountains have just recently turned green again after a freakish late-spring dump of wet, sloppy snow, and you can just barely see Puppy in the early dark, doing his morning laps up and down the side of our slope in his pointless, happy Puppy way. Sounds like the chickens need to be fed.

I guess I should do that. Stupid chickens.

Clue 3: You are still alive.

Do you know who you are yet?

You are me, Samantha Agatha McCoy, in the not-so-distant future. I’m writing this for you. They say my memory will never be the same, that I’ll start forgetting things. At first just a little, and then a lot. So I’m writing to remember.

This won’t be a journal, or a diary, or anything like that. First of all, it’s a .doc file on the tiny little laptop I carry with me everywhere, so let’s not get too romantic about this. Second, I predict that by the time I’m done with it (perhaps never) it will exceed the length and breadth of your typical journal. It’s a book. I have a natural ability to overwrite. For one, the paper on The Poisonwood Bible was supposed to be five pages and turned out to be ten. For another, I answered every possible essay question on NYU’s application so the admissions committee could have options. (It worked—I’m in.) For another, I wrote and continually edit Hanover High’s Wikipedia page, probably the longest and most comprehensive high school Wikipedia page in the country, which is funny because technically I’m not even supposed to go to Hanover High because as you know (I hope), I don’t live in New Hampshire, I live in Vermont, but as you also know (I hope), South Strafford is a town of five hundred and I can’t go to the freaking general store for high school. So I bought Dad’s old pickup on an installment plan and found some loopholes in the district policy.

Listen, name of God, this isn’t supposed to be a feelingsy thing, but it might have to be. We tried emotions in middle school and we didn’t care for them, but they have snuck back into our life.

The feelings came back yesterday in Mrs. Townsend’s office.

Mrs. Townsend (proper noun, person): A guidance counselor who has allowed you to test into all of the advanced classes you wanted to take even if they didn’t fit your schedule, and has made you aware of every scholarship known to woman so that you don’t have to bankrupt your parents. She looks like a more tired version of Oprah, and with the exception of Senator Elizabeth Warren, she is your hero.

Anyway, I was sitting in Mrs. Townsend’s office, making sure that I hadn’t missed any deadlines because Mom and I had to go to the geneticist in Minnesota two times in the past month. I didn’t even get a real spring break. (I type that as if I’ve ever had a spring break, but I was hoping to get some major prep in with Maddie, Debate Nationals being just a month away.)

I will try to reconstruct the scene:

White walls covered in old MILK: IT DOES A BODY GOOD posters, left over from the last guidance counselor because Mrs. Townsend has been so busy since she started five years ago, she hasn’t had the chance to replace them. Me, on a carpeted block that was supposed to be a cool, modern version of a chair but is really just a block. Across from me, Mrs. Townsend, in a yellow sweater, her hair jetting out in thick black curls.

I was asking her to get me a twenty-four-hour extension on the Poisonwood Bible paper.

Mrs. T: Why do you need an extension?

Mrs. T (staring at her computer screen, clicking): What thing?

I watched her eyes move. Right, left, right, left, across the screen. I remember that.

Mrs. T: What is it, Neeber Pickens? Is this a joke?

I had to laugh in spite of her face scrunching up, still reading.

Mrs. Townsend takes her eyes off the computer, her mouth hanging open.

Mrs. T: When were you diagnosed with this?

Me: Two months ago, initially. It’s been a back-and-forth process to confirm. But yeah, I have it for sure.

Mrs. T: You’re going to have memory loss? And hallucinations? What happened?

Me: Genetics. My great-aunt died of it when she was much younger than I am now.

I don't think she heard the part about me not dying, which is probably for the best, because at this point it is a statement I can neither confirm nor deny.

More like this
In Sarah Ramos’ 'Zaddy,' The Horrors Of Barre Are Laid Bare
By Sarah Ramos
9 Must-Read New Books Out This Week
By K.W. Colyard
16 Novels That Paint A Realistic Portrait Of Abortion
By K.W. Colyard
Yomi Adegoke On The Offline Diaries & The Power Of Representation
By Jessica Morgan
Get Even More From Bustle — Sign Up For The Newsletter