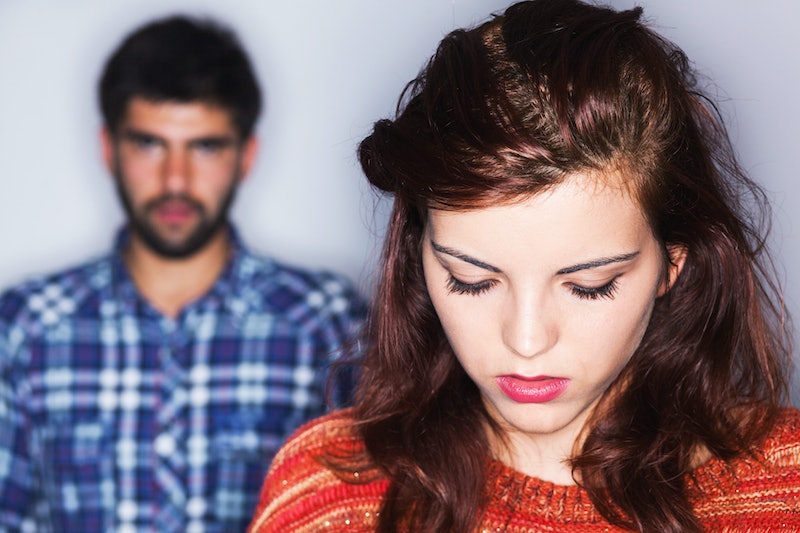 If you've been in one (or many) long-term relationships, you know they're not always a walk in the park. When the honeymoon phase fades away, there are bound to be arguments, both large and small. But when disagreements and strife start to overshadow positive aspects of your relationship — respect, trust, good communication — there might be a bigger problem looming: resentment. But how can you differentiate between day-to-day, normal instances of irritation and signs your partner resents you?

"The real problem here is that resentment can build up over time and, like rust, it never sleeps – it just silently eats away at your relationship," Gary Brown, PhD, LMFT, a Licensed Marriage and Family Therapist in Los Angeles who works with individuals and couples, tells Bustle. "As time goes on and the resentment builds it can reach the point where your partner actually begins to feel the worst form of resentment – bitterness. Once resentment reaches this state, a fair amount of damage has been done to the relationship."

Because of the damaging effects resentment can have on your relationship, Brown emphasizes the importance of recognizing the signs that your partner is harboring resentment. There are so many potential sources of resentment: finances, chores, sex, issues with friends or family, differences in social preferences... the list goes on. It's up to you and your partner to pinpoint the source and work on it together through open, honest communication (and couples therapy, if it's come to that).

Though Brown says there are too many signs to name — and they vary from person to person — here are seven indicators that your partner might be feeling bitter about something. But first, check out the latest episode of Bustle's Sex and Relationships podcast, I Want It That Way:

Withholding sex is never healthy in a relationship — it's a power play that many use as a weapon. Sex shouldn't be a tool, something to be taken and given in order to get what you want from your partner. "It's really a form of retaliation for one or a series of perceived slights, small or great," Brown says. "Denying intimacy as a result of resentment only tends to widen the gap between each of you." You also can't force intimacy, however, Brown says. "This needs to be talked about and worked through to some extent to rebuild trust, if possible. Otherwise, you're using sex as a bandaid and that typically doesn't work out."

If you and your partner normally show a lot of affection — whether that be kissing, touching, or verbal affection — it can be jarring to notice that that affection has reduced or outright disappeared. "This is a red flag as well in that it may show disinterest or general emotional as well as physical withdrawal from your partner," Brown says. "This is a sure sign that the level of resentment has escalated to the point where one or both of you has just simply withdrawn."

3. Increased Number and Intensity of Fights

It's one thing to have day-to-day squabbles that naturally crop up in relationships. But when fights become more frequent and/or more intense, you might want to take time to evaluate whether something deeper is at play. "If the fights are 'dirty' fights (hitting below the belt), and things are said that are not only hurtful but doing real damage, then things are clearly not getting better and even more resentment is likely building up between the two of you," Brown says. These nastier fights might be a sign that you're no longer engaging in communication, but have withdrawn altogether — which makes an even bigger gap to bridge.

Of course, there will be moments of sadness in any relationship: dealing with things like job loss or death are valid reasons to be upset. But long-term sadness, Brown says, is a different animal, and can mean any number of things. "It might be that one of you tends to be sad in general and it may not necessarily be a result of resentment. On the other hand, if you feel sad as a direct result of resentment — and the hurts that have piled up over time — that is a sure sign to get help."

5. Feelings of Helplessness and Hopelessness

These feelings are different, but closely related. "One partner can feel temporarily helpless but still believes that there are ways to salvage things," Brown says. "Feeling hopelessness is another story. It's related to helplessness but has much more of a feeling of despair because one or both have literally lost hope." If you can't look ahead to the future with your partner and feel excitement for what's to come, it's a sign that there is some major resentment holding you back from happiness.

Your partner should be your biggest supporter, so it can be a huge slap in the face if they don't show enthusiasm about celebrating big moments (like a promotion or anniversary) together. "How painful is it to have an anniversary and your partner 'forgets' it or, even worse, consciously knows it's your anniversary, and purposely will not celebrate it?" Brown asks. Events that were once important to both of you but are met with reluctance and a lack of enthusiasm can be a sign that your partner is resentful of you.

7. Withdrawal From the Relationship

This may be harder to immediately notice, as it likely happens over a long period of time. "Withdrawal can be a natural response to feeling resentment and is certainly understandable," Brown says. "Maybe you need a break from your partner rather than engaging in constant fighting. Sometimes, it is healthy to take this break and take the time to reflect on what is happening, why it is happening, and what you would like in this situation."

If you've noticed any above the signs in yourself or your partner, Brown recommends seeking professional help. "The deeper the resentment and the longer you have experienced it, the worse it can become," he says. "Seek out the help of a professional relationship specialist who is experienced and trained to help couples work through the emotional cancer of resentment and bitterness. The sooner you get help, the sooner you can limit further damage and begin to see what can be repaired in order to move on with your lives."