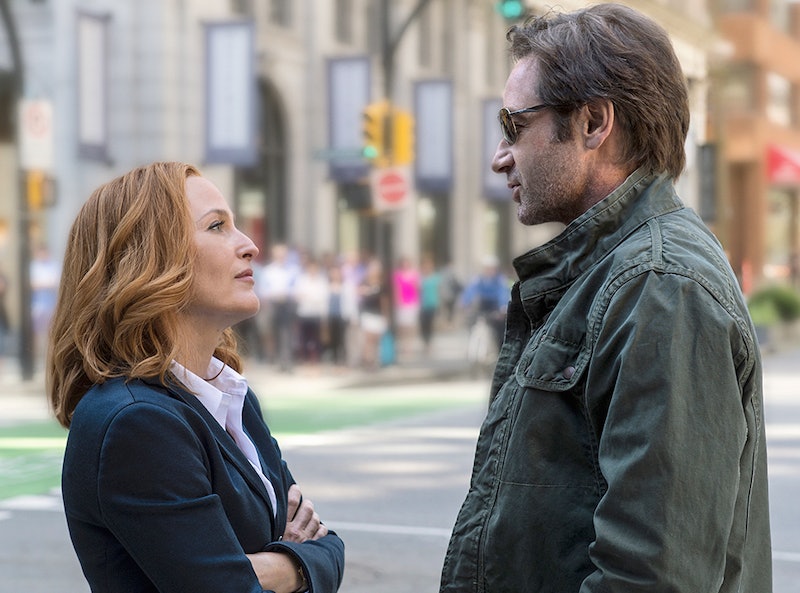 If you're as big a fan of The X-Files as I am, then your day is about to get a whole lot better. Rumor has it that The X-Files may be returning to the small screen sooner than we ever anticipated. Our favorite FBI duo returned earlier this year after a previous eight year hiatus. The tenth season was branded as a miniseries, with the hope among the fandom that some major questions would be answered — like, "Do these elusive aliens exist or nah?" Now, intriguingly, the possibility of yet another return to television could be just the kind of redemption the show is sorely in need of.

The shortened episode order was enough to keep us lifelong fan chomping at the bit for major development. The format proved to be a bit excruciating too; the original "Monster of the Week"-esque structure meant that we couldn't return to the big plots (i.e. the aliens!) in as deep a way as viewers were craving. And then... that finale happened, a mashup of all the best and worst aspect of the show. To say viewers deserved better after so short a run could be categorized as an understatement. But there's a chance that this was deliberate, in order to keep us eager for more episodes to flesh everything out. But will we get them?

From the way Fox TV chairman Dana Walden puts it, all signs are pointing to a fervent "Let's do this!": "We have had conversations with (creator) Chris Carter and (stars) David Duchovny and Gillian Anderson. I believe everyone is on board to do another show." Despite the various shooting schedules and commitments of Duchovny and Anderson, this is a sign of hope. It's a rare opportunity to have everyone's heart and mind in the same spot, especially since this potential next installment would be the eleventh season of the show with The X-Files production spanning more than two decades.

While various schedules may keep the core crew from shooting anything new the rest of the calendar year, Walden's statement gives life to the idea that there is still a ton left to explore in this show. If anything, X-Files deserves a real chance to unpack and explore what it was getting at in that insane finale. The X-Files has kept us wanting to believe for so long, so another season is deserved and needed if we can hope to really get the answers we fans want.