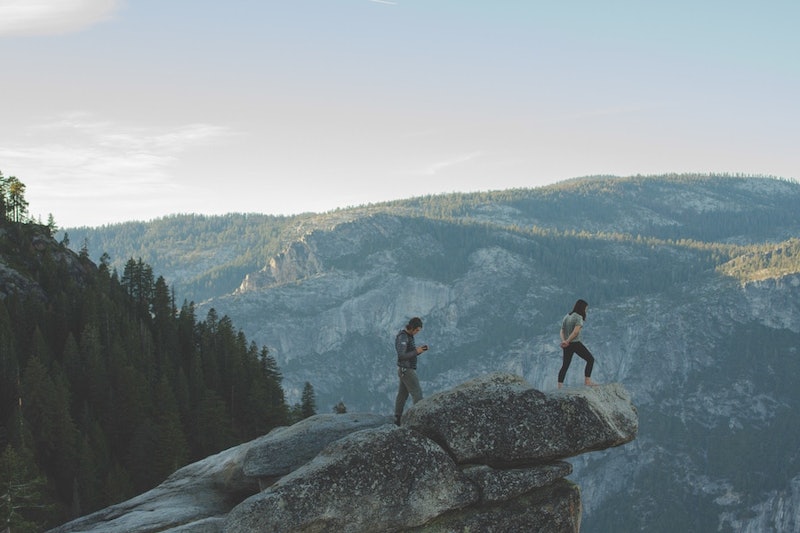 These days, there's a lot of talk of the importance of equality. And that's great. Because you have to have it. But there are ways your might not have equality in your relationship that you might not even realize, no matter how important you know the quality to be. It doesn't necessarily make you a bad feminist or some kind of oppressor if you realize you're not getting or giving your half. Unless, of course, you realize it and don't care (or celebrate your lack of equality), but that's a conversation for another day.

When I worked at a domestic violence shelter as a Domestic Violence Victim Advocate, and also when I worked as a Planned Parenthood Certified Responsible Sexuality Educator, I saw so many relationship problems that stemmed from inequality. Often (but not always) inequality was a tool an abuser used to control their partner. When it wasn't intentional, it still lead to some unhealthy relationships and some misery. At the very least, inequality in your relationship will most likely lead to a whole mess of resentment. Because eventually the person who is getting the short end of the equality stick will start to have some seriously angsty feels, until those feels are too big to ignore. And then those feels turn into conflict and drama. And in cases of abuse, they turn into violence or fear of violence. Better to make sure you're doing your share, and getting yours, in equal measure.

1. One Person's Needs Are More Important

I'm all for people being like "I gets mine." You have to do you. Hell yes, 100 percent emoji — all that. But when you're in a relationship, you're also building something with another person. That means you have to consider how your decisions affect them sometimes, and what your actions mean for your joint future. It's a balancing act for sure, and one all independent people in relationships struggle with from time to time, but if you're approaching it as "our needs are both important" instead of "my needs come first," then you'll figure it out. And sometimes you do come first. But compromise means that sometimes you don't. And if you want equality, that's the way it needs to be. Give and take.

2. One Person Is Not Assertive Enough

In somewhat healthy relationships, where abuse is not at stake, there can still be an imbalance of power. It can happen when one partner is shy, lacks conflict skills, or isn't assertive. Basically, it's when one partner is a doormat, and the other partner does their best to keep things equal, but also isn't a mind reader. Relationships are a safety zone, so if this is you, it's a good idea to explore why you're so uncomfortable asserting your own needs, wants, and opinions. Therapy can be a great tool. Doing your half sometimes means doing the uncomfortable work of stepping out of your comfort zone, especially if your comfort zone is not the healthiest of places.

3. One Person Determines When Sex Happens

Sex is supposed to be a two way street. Even if one person is super submissive, it's still because both partners have equally agreed to this kind of sex. But a lot of partners I worked with felt like the had no say in when they had sex. Their partners dictated when sex happened an they went along. It doesn't have to be this way. Sex should be a conversation that you're both having in which you both feel you have equal say and are equally satisfied. It shouldn't be that you partner gets what they want when they want it because it's one person's job to keep the other satisfied.

4. One Person Is The Default

Is one person basically in charge in your relationship? They get the best of everything. Everyone ask their permission. They listen to what they want to listen to in the car and watch what they want to watch on TV and buy what they want to buy at the store without a second thought about their partners. Because they're the head of the household. This is a carryover from previous generations where equality was nonexistent or defined much differently than it is today. If head of household means more than something one of you checks on your taxes then you might need to adjust to make sure you're both getting your half.

5. One Person Does All The Housework

Sometimes this is because of an imbalance of control. Sometimes it's because one partner is lazy. And sometimes it's because one partner needs to clean things and doesn't want the other partner to mess up their system. Each relationship will define this differently. But if it's a given that one person has to do all the housework and the other gets to be lazy, and that makes one or both of you feel uneasy, then you need to get your equal clean on. Work out a fair system together and then do your part.

6. One Person Carries All The Burdens

It's sweet when one person means well, and takes on all the burdens in a relationship to protect the other partner from unhappiness. It's also unfair. Both partners, when they can, need to share both the ups and downs of building a life together. One partner doesn't have to handle all the bad news and difficult problem solving. It isn't only stressful and unfair, it's a form of enabling. The protected partner never gets a chance to problem solve or lean important adult coping skills. Share the load as equally as you can.

7. One Person Is Responsible For Everyone's Happiness

When one partner goes out of their way to constantly please the other partner, there could be two problems involved. The partner who does the pleasing could be a people pleaser, who has self-esteem, anxiety, and/or insecurity issues that make them feel like they have to constantly make everyone happy. Or the other partner could have a bad temper or fits of rage and violence that the pleaser feels a need to try to prevent. No one should walk on pins and needles in a relationship and no one should do all the work of making things run smoothly. It's an equality issue, but also a safety and healthy relationships issue.

8. One Person Gets To Have All The Fun

Yeah, that's not cool. I've seen it a bunch in couples with kids. One partner gets to come and go as they please, including going out and having fun with their friends, while it's just assumed that the other partner will take care of the kids. I've also seen it happen when there's a tight budget. One partner will give up their fun activities so the other can still afford theirs. Or maybe one partner works two jobs and the other gets to go out and party. Sometimes these situations are unavoidable, but when they happen in a long-term pattern, they're bound to cause some tension. Equality means you compromise so that you both have (what you agree to be) equal responsibilities.

Sometimes it works out like that, where one partner supports the other while they achieve a big goal or do something important to them. But eventually, the supportive partner will have their turn, if they want it. That's fair. But if only one partner goes for their goals and dreams and never gives a thought to their partner's aspirations, that's a problem. It's also a problem if one partner just assumes that they can always do what they want and that their partner will take a back seat and a supporting role. You both need to have the opportunity to do what you need to do to become fully realized individuals who are satisfied with your lives.

10. One Person Gives All The Love & Affection

Sometimes one partner is just naturally more loving and affectionate than the other, and if that's not a problem in your relationship, then it's no big deal. You get to decide what's OK for you in terms of how affectionate and sweet you are to each other. But if one partner really needs more of that kind of attention, and gives it freely, but the other partner doesn't make a real effort to show the love, than it can be tantamount to not doing your share of the work in a relationship.

11. One Person Controls The Conversations

In an equal relationship, no one partner tries to silence the other. If you're having a disagreement, you both get a say. One person doesn't get to always say what they have to say and then shut the other partner down. The goal shouldn't be to have the last word or to win, but to gain mutual understanding and to find a solution to the problem. Also one partner doesn't get to talk constantly and never let the other partner have a say. Doing your fair share of listening and talking are parts of equal communication. too.

Equality isn't just about equal pay and equal representation in power. It's also about washing the dishes when it's your turn and making sure you have the same opportunities to do you as your partner does. It's a tightrope but it's one everyone needs to walk.