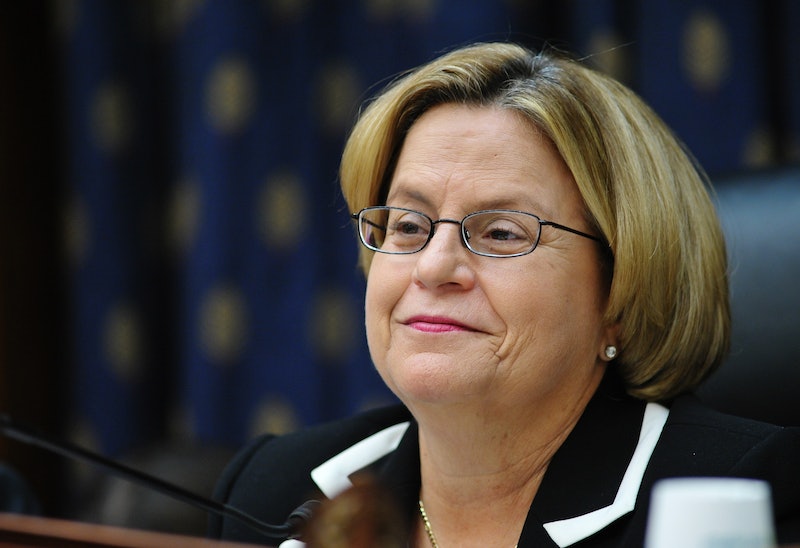 Which bathroom transgender individuals are supposed to use has become a topic of national debate in recent weeks, with many conservatives rallying behind a North Carolina law that forces everyone to use public bathrooms that correspond to the sex listed on the individual's birth certificate. The Obama administration intervened last week, telling public schools to allow transgender students to use the bathroom of their identified gender, much to the chagrin of those fighting LBGTQ rights. However, there's one Republican congresswoman who approves of the transgender rights order President Obama sent to every school district in the nation, and her progressive stance on the issue is helping bridge the wide party gap.

Florida Representative Ileana Ros-Lehtinen became the first GOP member of Congress to support marriage equality in 2012, and now she's advocating for transgender rights as well. Ros-Lehtinen has a transgender son, Rodrigo, who came out to her and her husband years ago.

"I worried about his safety and about his well-being," she told The New York Times' Lizette Alvarez, explaining that debates like the current one surrounding bathroom use subject transgender kids to more bullying and animosity. As a Republican, Ros-Lehtinen isn't the biggest fan of President Obama, but she supports the letter he sent to schools nationwide threatening lawsuits or less federal funding if they don't let transgender students use the bathrooms corresponding to their gender identity.

Ros-Lehtinen made her stance very clear when she made a public service announcement for South Florida gay rights group Save. Released Monday, the campaign shows the congresswoman at her kitchen table with her husband and son, explaining that she loved her child as Amanda and still loves him as Rodrigo. "At first, we had lots of questions, but as parents, we love and accept our children," she says in the video titled "Family is Everything" that was distributed in both English and Spanish.

"Every transgender person is part of someone's family and should be treated with compassion and protected from discrimination," Ros-Lehtinen explains. "All of our children should have the opportunity to work hard, earn a living, and take responsibility for their lives on the same terms as everyone else." The video doesn't bring up the current political and legislative battle over transgender rights, but it was clearly timed as a PSA to those opposing transgender people's bathroom choices.

Standing up as a Republican ally for transgender Americans is extremely brave, and could help the party progress on LGBTQ issues. Ros-Lehtinen is living proof that you can be conservative and still accept, protect, and fight for transgender people.