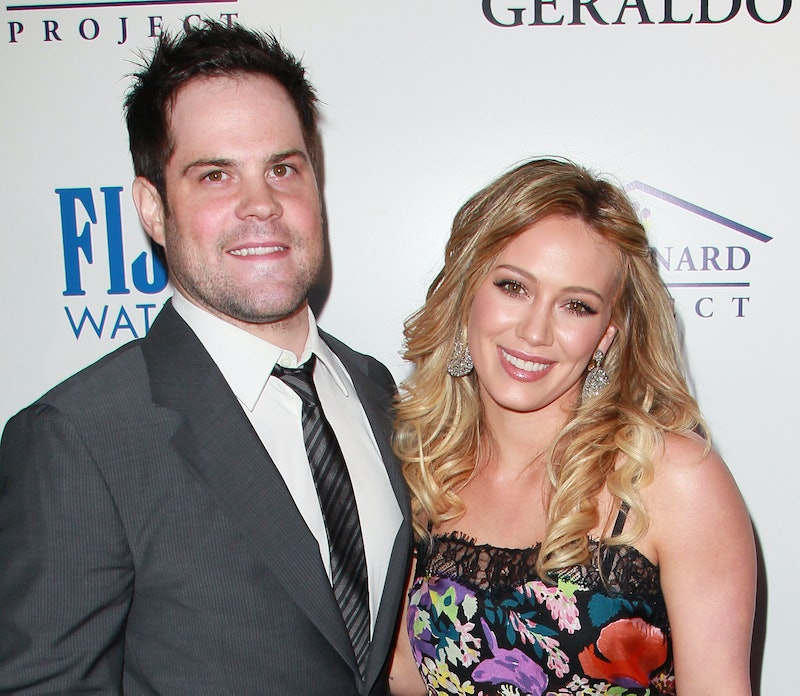 It always gives me a good feeling when celebrity couples reconcile. I mean, who doesn't love to see a happy ending? Take Pink and Carey Hart, who separated in 2008, got back together in 2009 and have now been married for 10 years and are also parents to their 4-year-old daughter, Willow. Well, the same might also be said for another famous duo. On Monday, TMZ shared a PDA-filled photo of Hilary Duff and Mike Comrie kissing Sunday in Beverly Hills. It sure looks romantic, but are Hilary Duff and Mike Comrie back together for real?

Bustle has reached out to Duff's rep for comment, but has not yet heard back.

Either they have worked things out and decided to try their relationship again or they still remain good friends (who also happen to kiss) for the sake of their son, Luca. And the latter wouldn't be anything new. They are one former celebrity couple who appear to have an extremely healthy relationship post-divorce. (Their divorce was finalized in February, according to E!.) From vacationing together in Hawaii to celebrating Luca's birthday as a family, Duff and Comrie seem to be amicable. For those who follow Duff on Snapchat, I'm sure you've also noticed that her ex-husband has appeared in several of her snaps during family get togethers, including ones with her sister, Haylie Duff.

The Younger star has spoken before about how she and Comrie really are friends. During a January appearance on The Ellen DeGeneres Show, the 28-year-old singer/actor said about co-parenting,

We have such a great kid, and we're both so obsessed with him. We are good friends and we laugh a lot and we have a great communication. We share pictures when one is not with Luca. Yeah, he's great. We are great and we keep on trucking.

Prior to that, in June 2015, Duff spoke with Entertainment Tonight about her status with Comrie and said, "I wouldn't say we have a cordial relationship, I would say we have a really strong friendship and a lot of love for one another. We're a family, and we're always going to be a family."

Well, there's no doubt they have remained a family. I give them props for how they've handled their divorce and remained friendly for Luca. It's probably one of the healthiest post-split relationships in Hollywood.

Now, as for whether or not Duff and Comrie have decided to give their relationship another shot? Who knows, but I guess they aren't too worried about what anyone else thinks or they probably wouldn't be kissing each other in public.