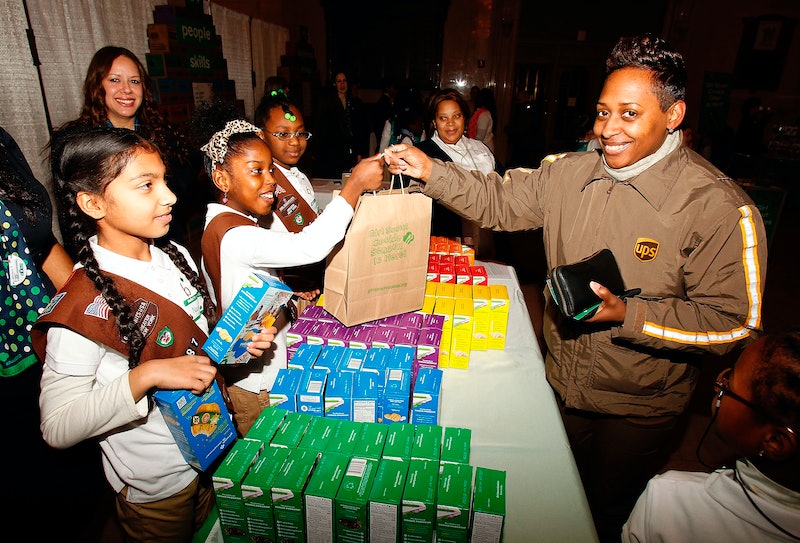 The anti-abortion lobby is known for going to pretty extreme lengths to advance its cause. The members yell at scared young women who are walking into abortion clinics, and some of the movement’s supporters have gone so far as to kill practicing abortion doctors. This time, though? These anti-choice zealots have taken it to another level — they’re boycotting the Girl Scout cookies. And it's cookie season!

The 2014 “Cookiecott” is well underway. A group of uber-conservative Texas moms has had its sights on the Scouts and the groups' "attachment to pro-abortion leaders and organizations" for a while, but a tweet from the @GirlScouts Twitter account added more fuel to the Cookiecott fire. In the tweet, @GirlScouts linked to a Huffington Post story that included Texas State Senator and gubernatorial candidate Wendy Davis in a list of inspirational women. Of course, you’ll remember that Davis quickly rose to fame last year after an 11-hour filibuster to prevent the passage of a highly restrictive abortion law in Texas.

The anti-abortion group, which is also supported by LifeNews.com and the Catholic Family and Human Rights Institute, is encouraging people who share its anti-choice views to refrain from buying Girl Scout Cookies this year, because their money will allegedly be going to fund a pro-abortion agenda. They also provide a handy flier that further explains the group's "pro-life concerns" about the Girl Scouts. The group encourages members to hand it out to "adults" at cookie sales.

Hold up. I’m fine with people choosing not to buy things based on their personal beliefs (no matter how big of a logical leap they make), but getting kids involved takes things a little too far. Sure, the group says to only give the flier to adults, but there will still be kids around who will have to listen to the anti-abortion rhetoric. I'm sure Cookiecott thinks all their supporters are nice and polite, but that probably isn't the case.

Can you imagine standing in front of a Wal-Mart in Tucson trying to sell cookies with your kid and someone hands you — or worse, your daughter — this flier? I know the right wing likes to start early with their anti-abortion indoctrination, but they should probably keep that to their own kids and let other parents make the decision to talk about abortion themselves.

Girl Scouts of the USA, the national organization, also isn’t happy that the anti-abortion lobby is using the cookies to make a political point. The Girl Scouts maintain that they are non-political and have no official position on abortion. Spokeswoman Kelly Parisi told USA today that the groups were "using our brand to push a political agenda on the backs of our girls."

It isn’t fair that the Girl Scouts have to be collateral damage in the ongoing war against abortion rights and reproductive choice, but I am proud that the organization didn’t bow to the pressure and immediately distance themselves from abortion altogether. Staying neutral on abortion, and all other political issues, for that matter, is what an organization that is supposed to bring people together should do.

I hope this boycott doesn’t seriously prevent the Scouts from raising money — an organization whose mission is to build "girls of courage, confidence, and character, who make the world a better place" seems worthy of supporting. Something tells me, though, that they’re going to be just fine — few of us can resist the call of Samoas or Thin Mints for very long. More cookies for us!