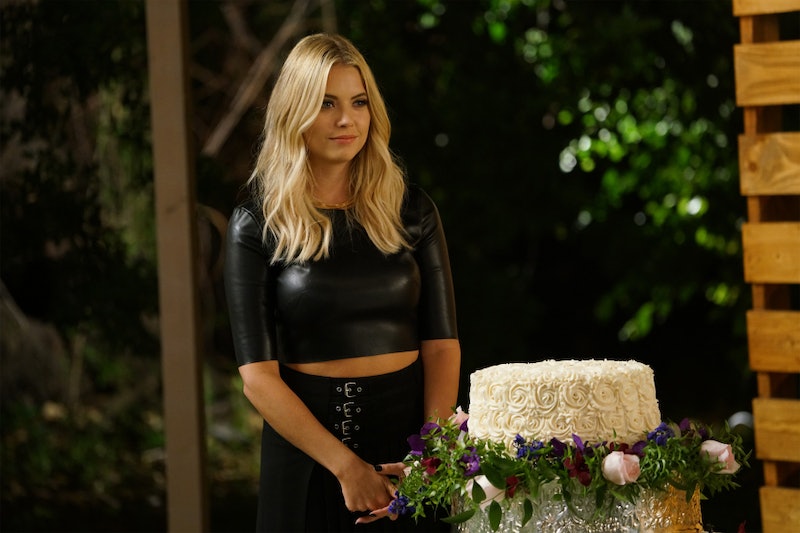 The seventh and potentially final season of Pretty Little Liars is not messing around. The stakes are even higher than ever, and now that Uber A has kidnapped Hanna, it's anyone's guess where Hanna could be or what state she might be in. When we last saw Hanna, she was being dragged across the floor of the bell tower, seemingly unconscious — definitely not good news for Hanna or the Liars making an attempt to save her. Now, a new trailer for Season 7 of Pretty Little Liars shows an even scarier sight, and it might be the most intense thing that we've seen on PLL since the dollhouse. Someone is hanging from the ropes in the middle of the bell tower, and though it's anyone's guess who this person might be, they definitely don't look alive.

So who could the dangling body be? Right now it seems that the show wants us to believe that it could be Hanna. Though we are unable to see a clear image of this person's face, they do have long blonde hair that is certainly Hanna-esque. Of course, there's no way that Pretty Little Liars would make it that easy on us, and if we're operating under the notion that Hanna isn't really dead, there has to be some other explanation. Here are three other possibilities as to who could be hanging from the bell tower:

Sara is rocking a pixie cut this season, but let's not forget that there was a time when her hair closely resembled Hanna's. Perhaps Sara is the one who really died in the bell tower, and A.D. decided to set up her body to look like Hanna's so that the Liars would mistakenly believe it was their own BFF dangling from those ropes. That's insanely twisted, sure, but it's a total A move.

Right now it seems like the person hanging from the bell tower is dead, but we also thought that Mona was dead in the back of Charlotte's truck, so maybe Hanna was hit with the same knock out poison Big A gave Mona once upon a time. No one who seems dead is ever really dead on PLL, so there's a possibility that even if it is Hanna's body, she's still alive.

I know, I know: Charlotte has been dead for a while now, so having her body be the one in the bell tower has a certain "ick factor" to it. Then again, maybe Charlotte isn't really dead, either?

The best case scenario? That there's no real body hanging from those ropes, and that it's just another trick played by Uber A. Of course, that would mean that the Liars aren't any closer to actually figuring out where Hanna is hiding, but at least no one has met their gruesome demise in the bell tower this time around. Here's hoping that the Liars find Hanna and their way out of yet another awful situation. It's about time these girls had a chance to relax, A-free.