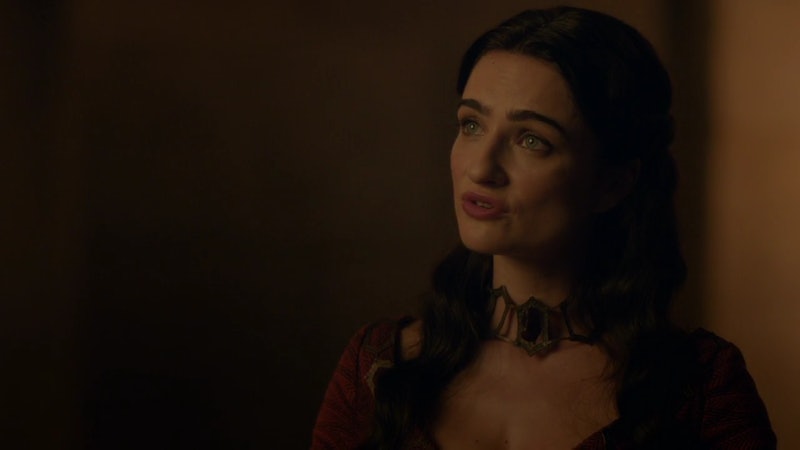 Religion and prophecy have never been more prevalent on Game of Thrones than they are now, and they're about to reach Meereen in a major way. Who is the new Red Woman, Kinvara, on Game of Thrones ? Played by actress Ania Bukstein, her appearance in the promo for next week's episode shows that things could get interesting for Tyrion Lannister.

Until Melisandre resurrected Jon Snow, I was over the Red Priestess. Now there's another one? This isn't too surprising. We know that R'hllor is an established religion in Westeros and Essos, and that the Lord of Light has many followers, so Melisandre can't be the only priestess. We've met other priests before. Thoros of Myr, who specialized in bringing his pals back from the dead, for example. It is, however, interesting that Kinvara has an identical (and, therefore, likely magical) necklace. Do they all have those necklaces?

The name "Kinvara" comes from leaked Game of Thrones audition sides that detailed a scene between the Priestess and Tyrion. According to those sides, Kinvara believes that Daenerys Targaryen is Azor Ahai reborn, which would be news to Melisandre. That would create dueling "chosen ones" with Dany and Jon, which I think would be pretty cool.

Kinvara isn't in the A Song Of Ice And Fire books, not so far as I can tell. This is a new character for the HBO series. Then again, Tyrion hasn't made it to Meereen or met Daenerys yet in the books. Maybe George R. R. Martin simply has yet to introduce her. What is she doing in Meereen? The official HBO description for Sunday's episode "The Door" tells us that "Tyrion seeks a strange ally" — strange, indeed.

In real life, however, Kinvara is a city in Ireland. It means "the head of the sea." Could this be an homage to the Game of Thrones filming locations? It definitely doesn't feel like a hint or a clue about her character. With this show finally passing the events of the novels by in terms of storytelling, it's so much more difficult to predict what's happening next than it used to be. New characters like Kinvara are definitely part of what makes Game of Thrones Season 6 so exciting.