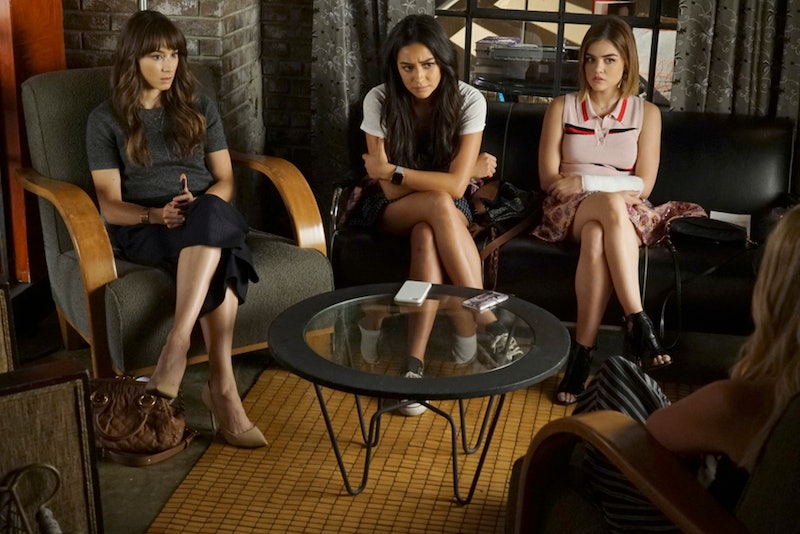 I have been anxiously awaiting the return of Pretty Little Liars since the credits rolled on the Season 6 finale, and though we're still over a month away from the new (and, potentially, final) season of PLL, we're finally getting a taste for what's to come. After dropping a first-look trailer for Season 7 of PLL on Instagram last Thursday, Freeform has just released a brand-new Pretty Little Liars trailer that hints at even more mayhem ahead. Though Season 7 is a total mystery, the trailer definitely gives us some insight as to what's ahead for the upcoming season premiere — and it might not bode well for the Liars.

Each season of Pretty Little Liars is jam-packed with jaw-dropping moments, and this time around, even the 30-second trailer has plenty of "oh my God"-worthy reveals. Though I. Marlene King already hinted in her spoiler video that the Liars would make their "biggest mistake" to date in the new season, the trailer finally revealed that it could potentially be a deadly one. There's plenty of intrigue ahead, and murder might also be on the menu for the Liars. (So much for their "five A-free years," right?!)

Here's what the trailer revealed about the upcoming premiere and season:

1. Caleb And Mona Will Work Together

Though Caleb was seriously pissed that Mona followed Spencer to the Lost Woods Resort in the Season 6 finale, a moment in the trailer reveals that these two will be working together to find Hanna.

Apparently Uber A is a big fan of deadlines, because, according to Mona, this A gave the gang a day to nab Hanna before something really bad happens to her. That ticking clock can't make things easy on any of the Liars.

The trailer reveals that A.D. texts the Liars that "the bell tolls for Hanna," which, obviously, sends them beelining for Rosewood's creepy-as-heck church. Is A.D. setting the Liars up for something, or is does he (or she) just really enjoy the cat and mouse game?

4. The Liars Are Burying Something — And It Could Be A Body

When the shoves come out on PLL, you know things are serious. Could the Liars be burying a body in the new trailer? It's worth noting that Hanna seems particularly M.I.A. from this burial situation — could she be the one in the grave?

5. Mary Drake Is Back With An Ominous Message

"Every family has secrets. Sometimes, these secrets are people." That might as well be the DiLaurentis family motto.

6. There's A Body In The Bell Tower

Could this be the person that the Liars are burying? The body is hanging from the ropes in the bell tower and definitely looks dead. Though we can't see the person's face, she's definitely a blonde — here's hoping that it's not Hanna hanging out!

The Liars are definitely in for one crazy season, so here's hoping they can finally end this A battle once and for all.