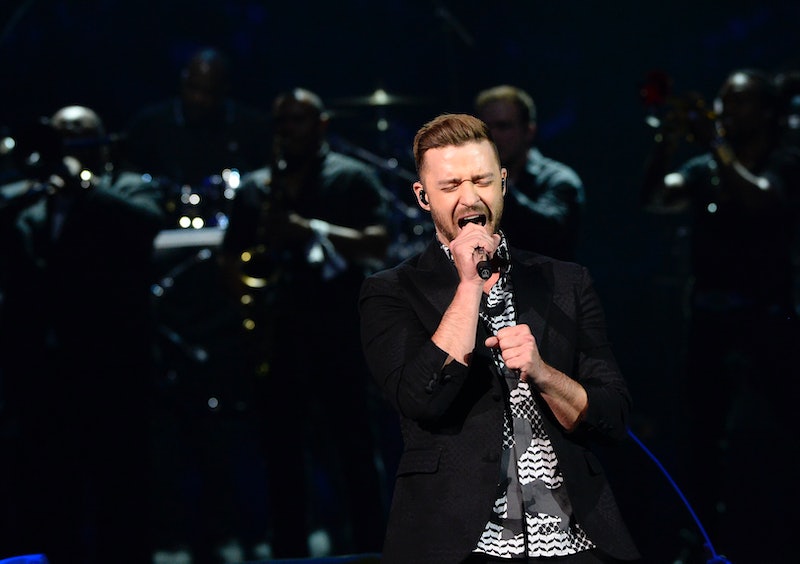 I'll be a bejeweled bellybutton, the lead single off of the Trolls soundtrack has done something only 25 other songs have done before: As Billboard.com reports, Justin Timberlake’s “Can’t Stop The Feeling!” debuted at No.1 on the Hot 100 chart. Put your spoon down, because the plot has some more thickening to do: the former *NSYNCer’s latest single is his first solo track to enter the Hot 100 at the No. 1 slot. So while Timberlake has had a handful of number one songs before (a round of applause for "SexyBack," "My Love" featuring T.I., "What Goes Around... Comes Around," and "Give It To Me" by Timbaland featuring Nelly Furtado and Timberlake), “Can’t Stop The Feeling!” is the only JT jam to kick open the Billboard Hot 100 castle gate and take over throne week one.

Uh, don’t mind me as I keep this little factoid in my back pocket until the end of time. Hey, you never know when a pop culture tidbit like that will come in handy. I can see it now:

I’m at trivia night with some friends, barely contributing to my team’s overall score. Instead, I’m wondering what’s with all of the geography questions this week, inhaling a plate of lukewarm mozzarella sticks, and kicking myself for insisting that Pluto was classified as a dwarf planet in 2003.

Just when I’ve all but checked out entirely, it happens: The trivia announcer says, “Here is our final question of the evening: What was Justin Timberlake’s first song to debut at No. 1?” My eyes go wide as I snatch the pen and trivia slip out of the team captain’s hands. It’s my moment to shine.

“I’ve got this,” I say as I scribble the answer and swat away my teammates’ hands. “Trust me, this won't be Pluto all over again.”

The trivia announcer checks every team's answer and tallies up the final scores. Our team is not just the only team to submit “Can’t Stop The Feeling!”, but our team also wins the night. One of my teammates fires up "Can't Stop The Feeling!" on the jukebox. And for the first time ever, I am dubbed the trivia night hero.

Wow. Can't wait to be the trivia night hero one day.