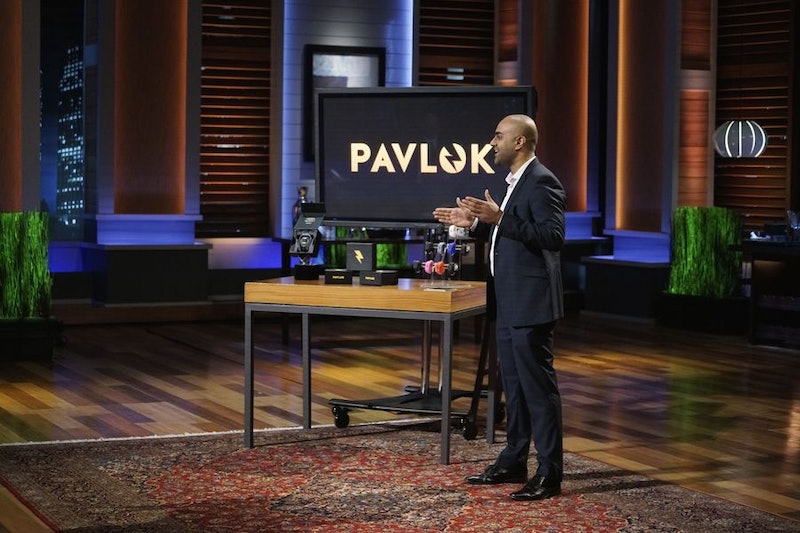 Shark Tank's latest featured invention may look like a simple fitness tracker wristband, but it's actually a little more sinister than that. You see, the Pavlok wristband aims to break your bad habits by using (as the name might suggest) the Pavlovian concept of negative feedback. In other words? It shocks you whenever you're about to do something you don't want to. Which... ouch.

First launched in 2014 by Maneesh Sethi during a wildly successful Indiegogo campaign (the device raised over $200,000, officially making it 508 percent funded), the Pavlok is fairly unique compared to all of the other wearable tech that's currently in vogue. I mean, what other wristband is going to literally shock you at the push of a button?

It's a little scary, but also potentially useful, especially when it comes to notoriously hard-to-kick habits, like smoking. In fact, it generally has a wide-range of functionality — you can use the Pavlok for everything from gym motivation to curtailing your time spent on Facebook. And according to Tech Crunch, you can adjust the intesity of the shock. Apparently, Sethi was first inspired to use Pavlovian training after completing an experiment where he literally hired someone off Craigslist to slap him every time he logged on to Facebook, which he wrote about on Hacking The System. He claims the experiment (as strange as it may sound) actually increased his productivity four-fold.

Interested in some masochistic habit-breaking? In getting aggressive with your mode of motivation? Well, you can buy one for yourself for $179 on the Pavlok website, as well as Amazon.

What do you think? Is it something you'd give a try? And perhaps more importantly, is it something you think the Sharks would give a try? It's tough to say — I have as many bad habits as the next person (if I told you how long I played Tsum Tsum today on my phone, you'd think I was crazy), but am I willing to pay just shy of $200 to hurt myself in order to stop? I'm not quite there yet, but if you are, all the more power to you.

At any rate, Pavlok is an interesting concept, and its successful crowdfunding campaign speaks well for its potential. On Shark Tank, it might really come down to whether the Sharks think there are enough people out there who would be interested in trying it out to invest in the company.