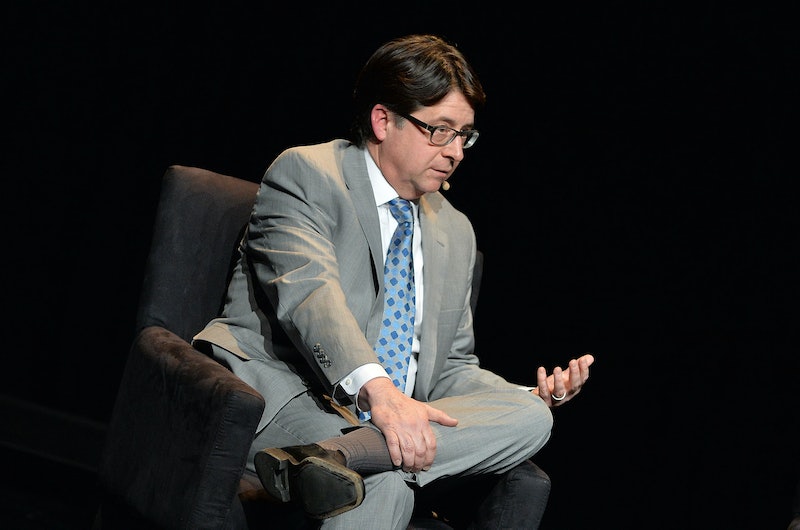 In a recent profile with Milwaukee Magazine, fans of the hit Netflix series Making a Murderer learned exactly how Dean Strang became a lawyer. Steven Avery's defense attorney didn't plan on becoming a criminal defense lawyer, which makes it all the more ironic that Strang has become famous for his legal work in Avery's case.

As an 18-year-old undergraduate at Dartmouth, Strang, a Wisconsin native, contacted the editor of the Milwaukee Sentinel and asked if they'd consider publishing his cartoons. To his surprise, the editor agreed, but three years later, Strang chose to pursue a law degree — a move that, unbeknownst to him, would lead him to widespread acclaim.

Strang is as no-nonsense in print as he was on camera in the Netflix docuseries that chronicles what many consider to be a miscarriage of justice in the Avery trial. Though his role in the trial sparked the interest of would-be style bloggers and launched a fandom known as "Strangers." the tough and ethical lawyer shown in the story of Making a Murderer is, in many ways, a story unto himself.

He entered law wanting to be behind the scenes, doing the difficult work that makes justice happen. In the profile, Strang admitted that when he entered law school, he never intended to become a trial lawyer.

In the Milwaukee Magazine profile, Strang cited a seeming discomfort with the critical nature of editorial cartooning as a main reason for changing career paths, and said that they're "never trying to solve a problem.”

His education in criminal law didn't come from his time in law school at University of Virginia, but rather during his time working with Jim Shellow, a "Milwaukee criminal court legend." Under his tutelage, Strang went on to become Wisconsin's first federal defense attorney.

Throughout the profile, which details Strang's life leading up to his meteoric rise to fame following Making a Murderer, author Doug Moe painted a striking portrait of the principles Strang said led him to pursuing a law career. From a belief in justice — his Swedish grandfather reportedly had a dedication to "the necessity for a clear delineation between right and wrong" — to his assertion that the entire criminal justice system could use "a dose of humility," Strang has used his skills as a lawyer to work for justice throughout his entire career.

With his newfound (and admittedly fleeting) fame, Strang told the Milwaukee Magazine that he plans to work even harder as an advocate for criminal justice reform. Strang has said that he keeps a framed portrait of former Supreme Court Justice Thurgood Marshall near the door of his office as a reminder of his anti-death penalty stance. As an extension of this, Strang revealed in the profile that he'll likely give 100 speeches this year about his beliefs and experiences from within the justice system.

Besides his opposition to the death penalty, Strang has also spoken publicly about the harsh way juveniles are prosecuted and has advocated for reform in what he considers too-long sentence lengths.

There are countless takeaways from Making a Murderer, whether the overall themes of corruption and secrecy in criminal justice, or the need for better assessment of mental health in the justice system. And, as the Milwaukee Magazine profile showed, Strang's ethics and capability have a long history behind them.