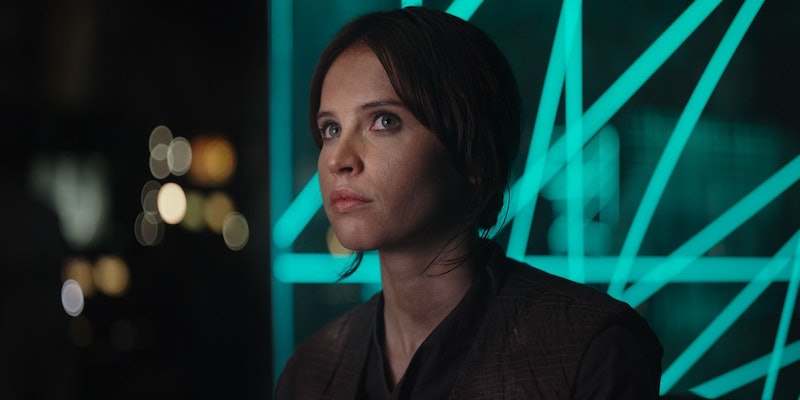 I have to say, it's hard to truly surprise a Star Wars fan in 2016, and that's why the idea of Rogue One: A Star Wars Story is so refreshing. We've spent the last year watching the family disfunction of the Skywalker clan that we're just dying to catch up with apparent badass Jyn Erso and a whole other pocket of the Rebel Alliance. So when it was announced that some potential Rogue One spoiler leaked allegedly on a German fansite via a co-opted preview pages Rogue One companion book, interest was decidedly piqued. But spoiler alert: if there's anything you need to know about the Rogue One spoilers, it's that they're terrible and, well, not really spoilers at all.

And not terrible in a "Darth Vader is your father" kind of way. They're terrible in a "Duh, Kylo Ren is his grandson" kind of way. Not even. They don't really give more about the plot away, half of them sound more like assumptions than certainties, and they definitely don't bring on a suckerpunch of shock. I would qualify them more like "underwhelming film tidbits" if anything. If you're still curious about what info we garner from the hijacked preview pages, though, feel free to read on here, here, here, or here.

The Rogue One "spoilers" are mainly some miscellaneous character details, appropriate for the visual story guide from which they allegedly were leaked. As a stormtrooper under Jedi mind control might say: nothing to see here, move along.

Rogue One is slated to play out more like a war movie than a whimsical tale about laser swords and the force, so perhaps we should just watch it unfold instead of searching for tiny "spoilers." At the end of the day, this could all just be an elaborate exercise in Photoshop, a red herring. Lame as the leaked details are, though, it's nice that fans are just that pumped for when the details are all revealed December 16, that any little detail will do.

Editor's Note: This article has been modified from its original form.