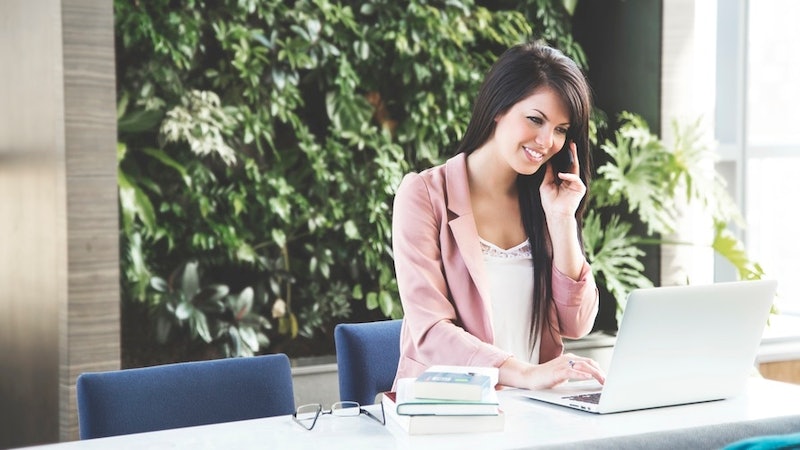 Just like being in a romantic relationship, there are things you shouldn't tolerate at your job or career. And sure, while you probably would love to have a fully-stocked fridge of every snack you can imagine, that's not necessarily the type of work deal-breaker I'm talking about. When it comes to your career, you want to make sure that your job aligns with your values and ethics. While your being able to pay your bills is an important factor to take into account, you shouldn't have to put up with an unhealthy job in any case. It's possible, though, that it's not necessarily your position itself that's causing you stress, but that maybe you're the one that's allowing it to have a negative impact on your life.

"Work environments [can] actually begin to mimic dysfunctional families if we let them; the reason why is that we come into the workplace with our 'universe' within us; i.e., our perceptions, baggage, insecurities, needs for affirmation and concerns about success. We bring into our workplace our issues, in a nutshell, not just our superstar qualities. Thus, we project them subconsciously, so people begin to treat us in ways that does not serve us purpose," says zen psychotherapist and neuromarketing strategist Michele Paiva in an interview with Bustle over email. While this could be the case, no one should be allowed to take advantage of you and treat you poorly at your job, because you deserve as much respect as anyone else. Not 100 percent sure if your current career path is as toxic as you think? Here are 11 things you shouldn't tolerate at your job.

1. Being Betrayed By Fellow Employees

While no one likes to be betrayed in general, being deceived in the work place is especially disappointing. If this happen, it usually results in you developing strong emotions against your employees that are hard to ignore, which can be a huge problem as well. "It is very easy to feel or be betrayed, because just as you bring your issues and assets, so do others. Not everyone is as ethical as you, nor even understand what ethics should look like. You should not have to put up with betrayal in your work life. Or in any part of your life," says Paiva.

If you feel like your boss hasn't been professional because they've been ignoring your emails or not being completely honest with you, don't think you're being pushy by trying to communicate with your boss. It's their job to be clear about what exactly's going on, even if that means communicating with you as to why you didn't get a promotion. "Passive aggressive entree with a swig of envy, anyone? Being disrespected, directly or indirectly, is not professional, doesn't help the team, and is poor leadership. Help them to help you to help themselves by not putting up with or at least calling attention (in a well-written socratic letter) so that they need to answer to you," says Paive.

So how does one write such letter? "Let us say that the situation is that you were ready for a promotion and someone else got it and you know deep down that you should have had it. You can write a letter to your boss stating you are (1) happy for your peer, (2) are looking for feedback on why you didn't get it, and (3) what other options are there for you in light of this news? This forces them to answer you and answer to you," Paive says.

3. Being Verbally Disrespected By Your Peers Or Boss

If you're feeling uncomfortable going into work every day because of your fellow employees, then you need to reevaluate why you're putting up with it instead of directly addressing the issue. "If they choose to make you the center of their world, so be it, but if they are going to talk about you, at least they should make it [about what] they like [about] you. You should not put up with being the target of envy; their issues not yours," says Paive.

This seems like a no-brainer, but this tends to happen a lot, especially in start-ups. But if you're doing something out of your typical schedule for your job and it involves something you wouldn't normally pay for (i.e. a business trip), your employer should front the bill. Period. "You should not tolerate out of pocket work-related expenses such as travel, office supplies, etc. A lot of young employees feel nervous about 'asking for too much' with a new employer, as they feel they still have to prove their worth and don't want to ruffle any feathers. Many companies offer a budget to set up and decorate your office, and all companies should cover work related travel expenses and office supplies," says career & business coach Rachel Ritlop, M. Ed in an interview with Bustle over email.

If you feel like you've been dealing with this on a daily basis, now's the time to talk to your boss before the stress piles up. "Make sure you speak up for yourself because these can really add up, and you shouldn't feel afraid that you will lose your job or bonus for asking for regular things," Ritlop says.

This is one thing no one should tolerate. You deserve to be respected and you should feel safe in your work environment. If anyone is making you feel uncomfortable, immediately contact HR and tell them what's going on. "While this may seem pretty obvious, you would be shocked at the number of people who bite their tongue and 'laugh it off' because they are afraid of missing out on a promotion or losing their job if they take things to HR. Harassment can come in many forms, be it sexual, religious, race, or really any sort of 'difference' or 'uniqueness' you may have. Any time somebody makes a comment to you that leaves you feeling uncomfortable, as if you've been violated, then it's likely harassment and a boundary has been crossed," says Ritlop.

6. Being Oversold Or Under Delivered

While no job is absolutely perfect, there should be no reason why you have to constantly deal with false information on a daily basis. Your job will then be based on lies, which can make you feel under-appreciated. "For instance, perhaps in the interview you were told you would have a team of five people or you would receive company sponsored training, but once you got to the job none of these things came to fruition. You should be documenting these things, from the time they were initially brought up to and asking for an alternative compensation method to make up for the lack of delivery. Nobody likes to feel like they've been tricked, or are being overworked without the right support or tools, so always document promises from your company and know it may be your responsibility to follow through and receive them," says Ritlop.

7. Bosses That Continue To Give False Promises

While this also falls in line with the above point, your boss could be the sole reason why you're not climbing up that career ladder. "They says you're going to get promoted or a raise, but it never happens. They're not fulfilling their commitments, which means you're not being rewarded as promised," says career coach and author to The Wall Street Professional's Survival Guide Roy Cohen in an phone interview with Bustle.

8. If Your Job Puts You In Potential Dangerous Situations

Just because everyone closes late at night or takes out the trash in a sketchy alleyway doesn't mean you have to put up with it if it makes you feel uncomfortable. "If your job is creating a situation where you're vulnerable or could be in danger (i.e. you're alone closing a store in the middle of the night) and they're not accommodating to your needs, that could be unsafe," says Cohen.

Anything that has to do with your income needs to be communicated with you in a professional manner. It's important for you to understand your position within the company and your financial situation and be confident in that. "You shouldn't have to deal with your finances being decreased without a discussion or some formal notice that changes are going to be made," says Cohen.

Even if you're used to your workload seeming never-ending, you don't want your boss or job to take advantage of you because you're afraid to say no. If you're feeling burnt out, it might be time to put your health first. "If you are constantly being asked to do more work than your co-workers learn to say no or ask for a raise to compensate for the heavy workload," says psychologist Kim Chronister, PsyD in an interview with Bustle over email.

11. Being Paid Less Than What You Deserve

"We cannot assume to be paid according to our worth if we do not advocate for higher pay. Develop a spreadsheet of all of your accomplishments and ask for a raise. If you own a business, charge more or increase your fee annually. Studies show that customers value services for which they pay a higher fee," says Chronister. Try not to tolerate your boss giving you personal reasons why they can't pay you more. When a boss chooses not to take care of their employees, but wants you to continue to do more work, then that's the definition of an unhealthy environment.

No matter how long you've been in your position, there are just some things you shouldn't have to put up with. If you notice any or all of these signs at your current job, it might be time to reevaluate your position and look for another job.