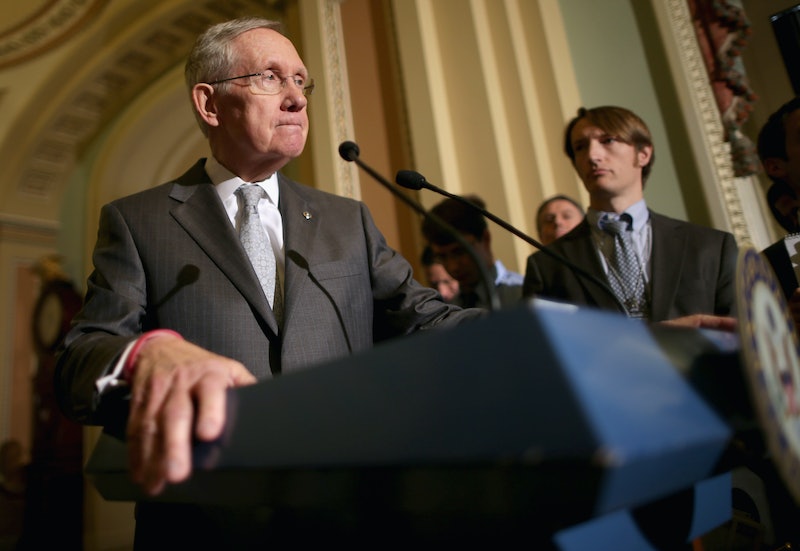 It's well-established that even though Donald Trump is the presumptive GOP nominee, he's having a difficult time appealing to Republican elites from Paul Ryan to Mitt Romney. However, it's not just powerful conservative politicians who dislike Trump, it's influential Republican Party donors, too. On Monday, an article in The National Review disclosed that the top donors to the GOP, the Koch brothers, will not be funding a presidential campaign in 2016. The $900 million that they had planned to spend on the election cycle has been cut down to $40 million to be spent on smaller races.

It has long been clear that the Koch brothers do not support Trump, or his policy; however, some believed the billionaire brothers might change their mind once Trump became the GOP nominee — nope, nope, nope. In fact, the Koch brothers dislike Trump so much that they have essentially refused to engage in the presidential election, and even hinted they might be more inclined to support Hillary Clinton.

However, Trump isn't the only Republican that Charles and David Koch dislike — before Ted Cruz and John Kasich dropped out of the race, Charles Koch condemned all of the GOP nominees. The billionaire businessman told ABC News, that the last three GOP nominees standing were all "terrible role models."

Certainly including Trump in the mix, Charles Koch continued to say of the candidates, "These personal attacks and pitting one person against the other — that's the message you're sending the country. You're role models and you're terrible role models."

Now, what difference does it really make that two brothers from Kansas say they don't want any part in the bizarre 2016 Republican presidential race? Well, it makes a huge difference. Up until now, the Koch brothers have been the most influential Republican donors — and have advised America's wealthiest conservatives on what politicians to back, too. This time around, however, they won't be backing anyone for the presidency.

In the same April ABC News interview, Charles Koch went so far as to say that "it's possible" Democratic Party frontrunner, Hillary Clinton, could be better for America than Donald Trump. However, Clinton made clear on Twitter that she wants nothing to do with the climate-change-denying Koch brothers.

The Koch brothers do not dislike Trump because he isn't part of the so-called Republican establishment. No, the brothers dislike The Donald because they entirely disagree with his policy and beliefs. Charles Koch does not support Trump's proposed Muslim registry, and told ABC News, "I mean, this isn't Nazi Germany. I mean, that's monstrous... So, obviously we totally oppose that." The brothers also do not see Trump as a candidate who would support their belief in a "free market."

So, how come the Koch brothers are not leading the #NeverTrump movement if they so strongly dislike The Donald? Well, as the National Review article explained, the Koch brothers believe that a Koch-backed, anti-Trump campaign would just fuel the Make America Great Again fire. Trump is proud to (at least partially) fund his own campaign, and would certainly claim he doesn't want, or need, the money of politically motivated billionaire donors — he claims he's for the people, and not a political lobby.

That's why the Koch brothers have exited the presidential race: They don't like Trump, but they're powerless against the somewhat-unexpected candidate.