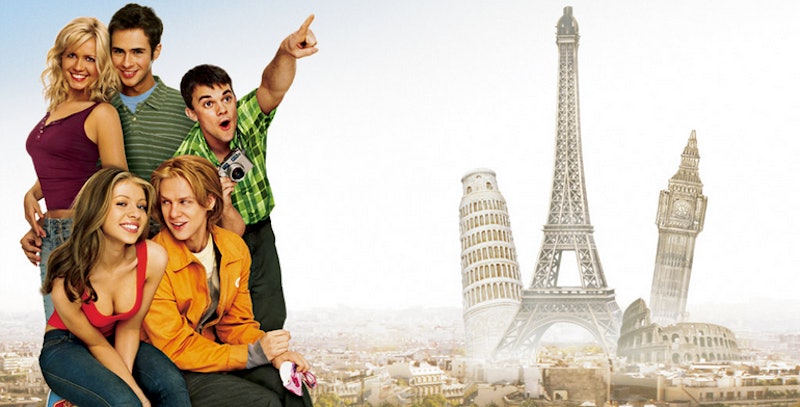 Scotty doesn't know that Eurotrip is 10-years-old today — and you probably didn't know, either. You also probably haven't seen it since it came out in 2004, but the teen film that starred Michelle Trachtenberg and featured a hilarious singing-cameo by Matt Damon is celebrating its tenth anniversary today. So you should probably break out your bottle of Green Fairy and cheers while listening to Lustra's smash hit "Scotty Doesn't Know" and laughing at Damon's recent butt-fax.

Eurotrip, which boasts the official tagline of "No Europeans were harmed in the making of this film," (we're not sure if that's entirely true) is about a guy (Scotty) who gets dumped by his girlfriend (who's been cheating on him with Matt Damon) on graduation day so he heads to Europe with his friends. And the rest of the film is all Michelle Trachtenberg's boobs, ridiculous hijinks, and an equally ridiculous search for Scott's "true love" (his pen pal Mieke).

In reality, if there's anything you need to remember, it's Damon's ridiculous character Donny and "Scotty Doesn't Know," which he told HuffPost Entertainment in 2012 helped him maintain a level of normalcy in his life — well, as much normalcy as a guy who photocopies his butt can get.

And now, to celebrate Eurotrip's 10-year anniversary — here's the film in 10 gifs:

"This Isn't Where I Parked My Car!"

But They're Going To EUROPE

Where They Meet This Guy

"My baby takes the morning train..."

"YOU MADE OUT WITH YOUR SISTER, MAN!"

Last But Not Least