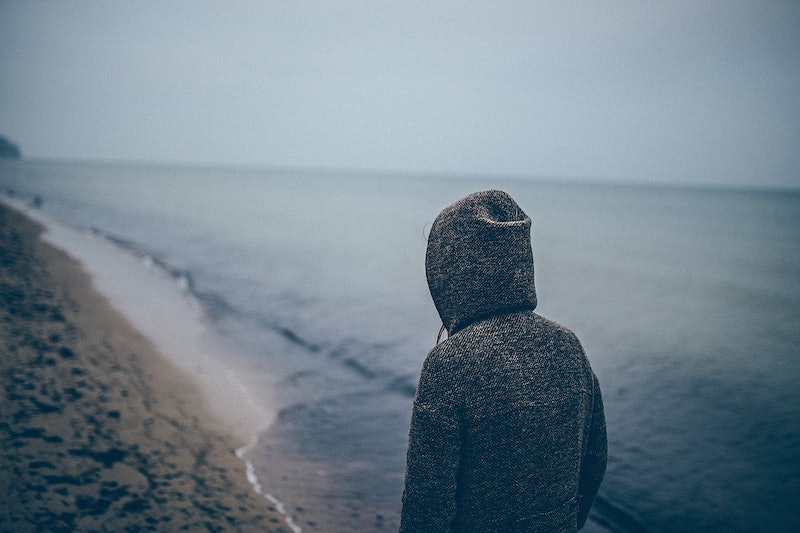 When we think of depression, some of us may tend to picture overwhelming sadness and social isolation. However, depression can manifest itself in many other ways, and some of these unsuspecting signs of depression can be easy to miss. Knowing the many possible symptoms can help us recognize depression, and the more aware we are about the disorder, the easier it is to get to the root of the problem and treat it. Considering half of people with depression go untreated, according to research from Wayne State University, it's important we look at all possible symptoms, not just the obvious ones.

So why are so many people able to go along in life without anyone catching on to their depression? "Our current culture doesn't really give people much leeway to let others in when we're feeling depressed, so there are definitely cultural influences at play," says psychotherapist Kristen Martinez, M.Ed., Ed.S., LMHCA, NCC over email. "People start to get really good at putting that 'mask' on — the mask of being sociable, happy, and otherwise 'fine.' Something doesn't feel right to them, but they don't want to burden anyone with their feelings, or bring anyone else down, so they hide it."

If you think you or someone else might be depressed, consider these 11 signs of depression that you may be missing.

"In our culture, it seems like everyone is running on empty, so hearing that someone has fatigue or is pretty tired on a consistent basis doesn't raise anyone's eyebrows," says Kristen Martinez. However, fatigue is one of the most common symptoms of depression, according to research in the journal Innovations in Clinical Neuroscience. This type of low energy can be both physical and mental.

"Most people think depression only affects the mind, so they may miss any corresponding physical symptoms," says Kristen Martinez. "However, depression can have emotional, mental, and physical symptoms; pain in the body, aching joints, or lower back pain can be symptomatic of depression."

"If you hear that someone isn't concentrating as well as they used to, there could be many things that you'd go to before you think that this person might be struggling with depression," says Kristen Martinez. However, the ability to take in information quickly and efficiently is impaired in people who are depressed, according to Everyday Health.

Eating patterns can be disturbed if you're suffering from depression. Many people end up binge eating to numb their negative feelings using food, according to WebMD.

"Most people think that your eating pattern might swing one way if you're feeling depressed, but they don't realize that it can go both ways — from a nonexistent appetite to a voracious appetite," says Kristen Martinez. Loss of appetite is a common symptom of depression, according to Mayo Clinic.

6. Having A Short Temper

"When people think of depression, they think of someone who is sad," says Kristen Martinez. "However, anger can be a prominent symptom of depression." Multiple studies show that people who suffer from depression have increased anger, and they can show difficulty regulating these feelings.

Many people who suffer from depression often lay in bed all day, and whether it be from lack of motivation or a feeling of failure, says Psychology Today. Too much sleeping can be an attempt to escape reality.

"If you're sleeping too little, or have insomnia, people might not assume that you are depressed," says Kristen Martinez. "Most people associate sleeping too much with being depressed and may not realize that this can also be a symptom of depression."

Apathetic boredom and loss of energy and inspiration can be a sign of depression. "It is loss of interest in activities they once enjoyed," says Nikki Martinez, Psy.D., LCPC over email. "This will not be the sad, can't get out of bed kind of situation — this will be a more causal and consistent canceling of plans."

Feeling depressed can affect your perception of the world: People with depression see colors as more dull, according to a study published in the journal Psychological Science. Their color perception becomes skewed, and they begin to see with the world as more gray and less bright colors than people who don't suffer from depression.

10. Spending A Lot Of Time On The Internet

Spending too much time online can be a subtle sign something is wrong. A study from the journal Psychopathology found that people who use the internet excessively are more likely to be depressed than non-addicted users.

Committing to a decision can be overwhelming for people, especially those who suffer from depression. This burden can cause depressed people to avoid making choices, according to LIVESTRONG.

Just because you have one of these symptoms doesn't mean you're necessarily depressed, but it can be important to pay attention to these subtle signs that may indicate a larger issue.

More like this
This Psychological Effect Might Be Keeping You From Hitting Your Goals
By Lexi Inks
3 Zodiac Signs Most Likely To Be The Center Of Attention
By Nina Kahn
19 Latinx Therapists & Mental Health Experts To Follow On Instagram
By Kaitlyn Wylde, Naydeline Mejia and Lexi Inks
Rachel Zegler Reveals She Had Breast Cancer Scare
By Radhika Menon
Get Even More From Bustle — Sign Up For The Newsletter