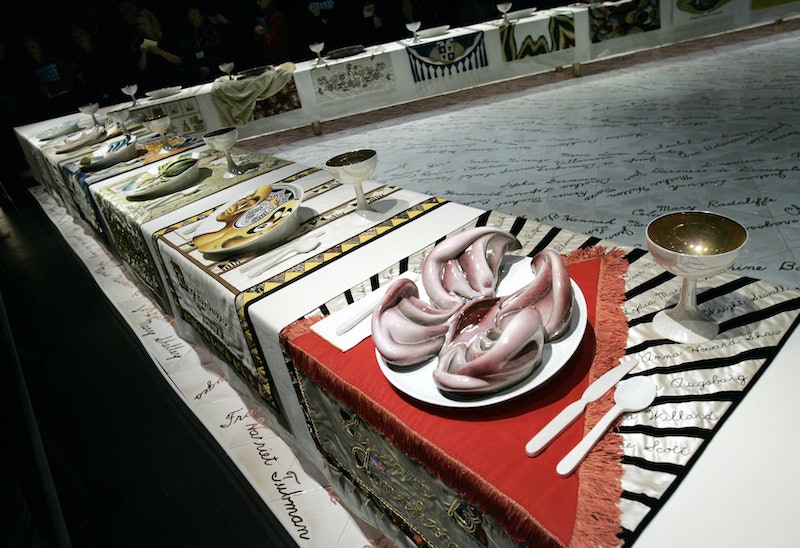 Put on some shoes and hot-foot it to your nearest museum: May 18 is International Museum Day! To celebrate, here's a list of some of the most notable museums of women's history and art worldwide, focusing on everything from the history of women's political equality to feminist art. If your appetite for feminist museum fodder is still unquenched, be reassured: this is only scratching the surface. Museums centered on women's issues and contributions to history are flourishing around the world, and you just have to follow your nose (or a good tourist guide) to find them.

The modern age also means that some of the best "museums" for women's work are online. The National Women's History Museum, for instance, is still searching for a bricks-and-mortar home in the U.S., but meanwhile, you can lose hours in its extensive online exhibitions on everything from Harriet Tubman to women in early American film. (Don't say I didn't warn you.) And further afield, the Women's Museum of Istanbul is currently housed online while it raises money for physical quarters, but you can scroll through hundreds of biographies of notable women in Istanbul's history. Plus, remarkable parts of women's history are often concealed within bigger museum spaces: the Musée Curie in Paris, for instance, traces the history of the entire notable Curie family, but also contains Marie Curie's (thankfully decontaminated) office and laboratory.

Here are 11 of the top feminist museums, both in the U.S. and around the world. Grab your passport; I sense a historical vacation afoot...

If you've heard about the Sackler Center, it's likely because of one of its most notable permanent exhibitions: Judy Chicago's "Dinner Party," a colossal installation with a place setting for hugely influential women in art, literature, and history. Housed within the Brooklyn Museum in New York, the Sackler Center focuses exclusively on explicitly feminist art; at the moment its temporary exhibition looks at activist art struggling for social justice for women. It also hosts the First Awards for women who have become pioneers in their fields, honoring everybody from Julie Taymor to Miss Piggy.

Check out the Elizabeth A. Sackler Center For Feminist Art here.

As is the case with much of science, the contributions of women to humanity's attempts to reach the sky and stars have often been overlooked. (You likely don't know the name of Margaret Hamilton, but she and her team wrote the entire code for the Apollo missions for NASA — by hand.)

The International Women's Air & Space Museum is aiming to correct that. The museum opened in Ohio in 1998, and while it's quite small by comparison with other sprawling women's museums, it packs a punch, with memorabilia from figures like Amelia Earhart and Bessie Coleman (a 1920s aviator who was the first African American female pilot to earn a pilot's license).

The Vietnamese Women's Museum in Hanoi is one of the top 25 museums across the entirety of Asia, and it is astonishingly comprehensive. Its collection of objects and artifacts reaches past the 28,000 mark, and they're all devoted to the history of women in Vietnamese culture and politics. It was renovated in 2010, and now combines a permanent series of exhibitions on women's fashion and history with temporary ones focusing on anthropology, modern art, folklore, and virtually anything else you'd care to name.

The Women's Museum in Aarhus, Denmark aims to help visitors "experience the story from a female perspective", and is particularly focussed on children. It's collected objects and oral history from generations of Danish women, from the domestic sphere to the activists and fighters for the vote. It only started in 1982, but clearly knows its stuff: the current array of temporary exhibitions include a photographic series on teen mothers worldwide and a collection of short films narrated by Dame Helen Mirren, which is a hell of a pedigree.

5. National Museum For Women In The Arts, USA

Back in the U.S., the National Museum For Women In The Arts in Washington DC has a pretty enormous claim to fame: it's the only museum in the world that focuses exclusively on art produced by women, across all mediums. The collection is truly international and genre-bending, from 17th century portraitist Mary Beale to American Impressionist Mary Cassatt's delicate pastels, all the way to their current exhibition of contemporary Iranian female photographers. It's also got a research library and hosts a ton of events based on raising the profile and importance of female artists.

Check out the National Museum For Women In The Arts here.

Anna Akhmatova was one of the most famous Russian women in history, a poet of Russia's Silver Age who survived the Stalinist terror, saw both her husband and her son executed, and wrote devastatingly about what she witnessed. Her old apartment in St Petersburg is now a museum in her honor, combining exhibitions about her life and poetry under Stalin with a collection about literary history. Even if you know little about Akhmatova, prepare to be stunned.

Emmeline, Sylvia, and Christabel Pankhurst were the quintessential suffragettes, leading the English Votes For Women campaign and occasionally being arrested as radicals in the process. The house of their family in Manchester has become the Pankhurst Centre, which acts as a small museum for the suffragette cause in England at the beginning of the 20th century. It also doubles as a women's community center shared by Manchester Women's Aid, a domestic violence charity. The museum is currently only open once a week on Thursdays, but it has announced a fundraising campaign to help it stay open daily.

Check out the Pankhurst Centre here.

The Sewall-Belmont House & Museum in Washington DC is essentially a place of pilgrimage for people interested in the fight for women's rights in America. It celebrates everybody from trailblazing journalist Ida B. Wells to suffragette leader Lucy Burns, and has a powerful legacy: the house was purchased by the National Woman's Party, who agitated for women's equality, in 1921, and has been its home ever since. It contains a huge collection of suffrage and women's rights memorabilia, the Florence Bayard-Hills Feminist Library, and everything from voting cards to photographs tracking the history of the American women's movement.

This is another museum dedicated to a single trailblazing figure: Florence Nightingale, the Crimean war nurse who broke huge barriers in the 19th century for women in medicine, hugely reduced the death rate in army hospitals, and was a strong advocate for the right of women to enter the workforce. In other words, a badass. The London museum devoted to her life is both comprehensive and pleasingly batty: it includes her beloved pet owl, Athena (now stuffed), as well as letters, medicines, and her famous lantern.

The Fraenmuseum in Bonn has an unusual set-up; it actually houses five studios where contemporary female artists practice. That might give you some idea as to its focus, which is on raising awareness of women's art and historical importance. Its own permanent collection contains work by people like Yoko Ono, and its temporary exhibitions and publishing house tend to focus on experimental art by women, but it also doubles as an active cultural center, hosting prizes, talks, workshops, and even a studio purely for kids. Definitely worth a day of your time.

Check out the Fraenmuseum here.

If you've studied any feminist history at all, you'll recognize the name Susan B. Anthony, which is why it comes as no surprise that the home of the abolitionist, suffragist, and civil rights activist in Rochester, New York has been transformed into a museum of her life. And it doesn't do things by halves: even its major fundraiser item, an alligator bag, is based off Anthony's own bag and her edict that "woman must have a purse of her own... the right to her individual and joint earnings." They also hold the Courageous Leaders Consortium to find new female leaders of the future.

Check out the National Susan B. Anthony House here.

More like this
25 Quotes About Love To Share During Pride Month 2022
By Madeleine Aggeler and Emma Garza
How To See The Lunar Eclipse On May 15-16, 2022
By Kaitlyn Wylde
Sandra Bullock, Girlboss Extraordinaire
By Matt Harkins & Viviana Olen
Meet The Spice Company Founder Who Sees Chai As A Metaphor
By Madhuri Sathish-Van Atta
Get Even More From Bustle — Sign Up For The Newsletter