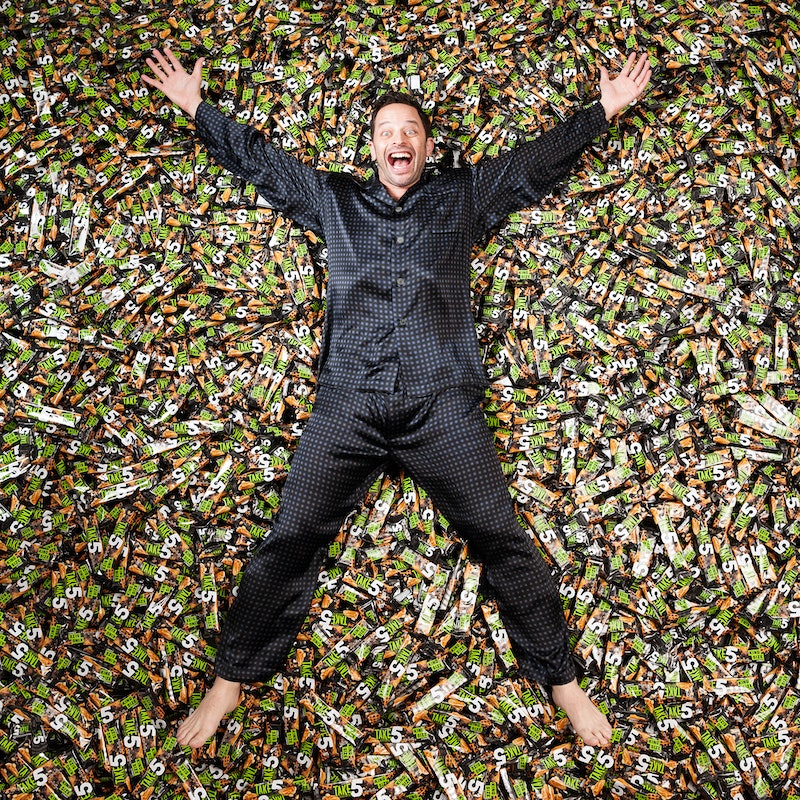 "It's been going on ten years," actor and comedian Nick Kroll says of his love affair with Take5 candy bars. "I think the secret weapon is the pretzel. It's an all star team. I like a little caramel, I like the peanut butter and the peanut combo, keeps the texture right. Having the flavors right and the textures right is a hard thing to nail down, but they figured it out."

From the way he's luxuriating over every facet of the candy bar, the star of The League and upcoming animated comedy Sausage Party could be a spokesperson for the Hershey's candy, and turns out, he is. But their partnership began in a fairly organic, meet-cute-ish type way. According to Kroll, he's been eating the candy for over a decade, and before the candy company was sponsoring his love for them, he would request them in his touring rider. For the uninitiated, a rider is a list of requests a performer sets as criteria for performance or venue. Requests can range from certain foods, to specific scented candles, beverages, or even furniture. "For a lot of people it's like, 'I want 15 Smart Waters and a Bengal tiger and two SUVs,' and I'm like, 'I just want Take5s.'"

Because his love of the candy was already fully developed before he was approached by the company, Kroll felt like it was an honest partnership. "When you're a public personality, you have to be sort of careful with what you associate yourself with. In my mind I was like, well, I already have unofficially been the spokesperson for them, and now they're going to pay me money in addition? It sounded like a win-win. I would have done it just for free Take5s."

For the past several months Kroll has been on tour with the Oh, Hello show. The show, which he crafted with comedian John Mulaney, features Kroll and Mulaney as Gil and George — two old, opinionated men. The New York Times said the show is, "sour and crotchety old men at their best."

And while the two men occasionally feud and bicker on stage as Gil and George, Kroll swears: "I'll never be sick of John Mulaney. John Mulaney is the Take5 candy bar of people, in that he pays me to hang out with him," he jokes. "No, it's the most fun. It's such a pleasure to inhabit those characters. In fact, we've been doing Oh, Hello for about 10 years, so about the same amount of time I've been in love with Take5s. We would have Take5s wherever we were doing [the show], and at the end of the show we do a Q&A with the audience, and if we liked the question we'd throw them a Take5."

To celebrate his love of the candy, Kroll did a photoshoot where he dove into a huge pile of them — á la Uncle Scrooge in Duck Tales. "The whole point of this was to get me in a room with thousands of Take 5s," he says. "I give them out to people when they come to my house. I don't tend to tell them that I was lying on and in them..."

Want to be sponsored by Take5, too? Watch this Take5 video featuring Nick Kroll to find out how: