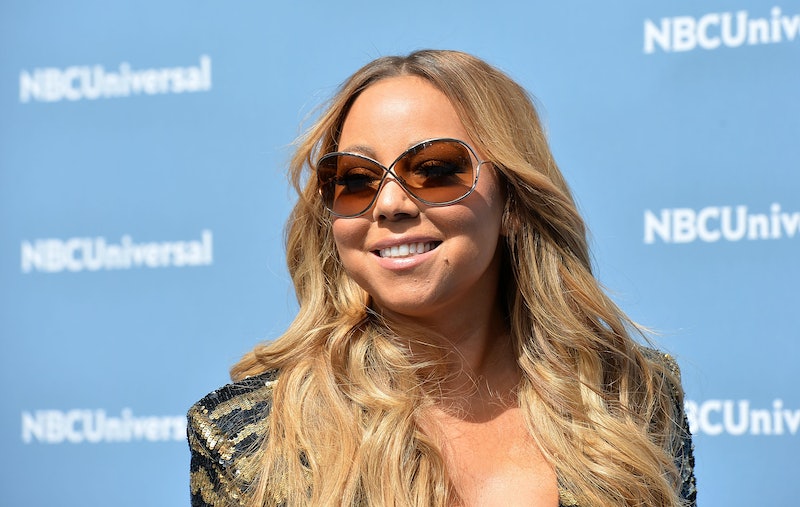 Whether in literature or in real life, there are a few famous historical feuds that will quite literally never be forgotten. You know who I'm talking about: the Montagues and the Capulets, the Hatfields and the McCoys, and... Mariah Carey and Jennifer Lopez. These two pop stars have reportedly been on opposite ends of a diva duel since the year 2000, when Carey was asked on a red carpet what she thought about Lopez. Carey's response became an Internet legend, right up there with "the dress" and "Damn Daniel," and somehow, 16 years after it happened, Carey finally has an explanation for her comment.

In case you aren't up on your pop diva wars, a reporter asked Carey her thoughts about Beyoncé, and Carey sang her praises. She said at the time, "I love Beyoncé. Beyoncé is fabulous. I think she's a great writer, a great singer... she's a very sweet person as well." Then, when asked about J.Lo, Carey replied, "I don't know her."

Of course, Lopez was as big a superstar then as she is now, so it seems highly unlikely that Carey had never heard of her, and her response was deemed so delicious and so shady, a giraffe could stand under the tree and be spared from the sun.

For that reason, the moment has lived on, and the two are frequently pitted against each other in the media as having some kind of war. Carey and Lopez have both been asked about this on talk shows for years, and Carey has insisted that she "still doesn't know her," and Lopez recently agreed, telling Wendy Williams, "She does say that… she’s forgetful I guess. We’ve met many times. I don’t know her that well."

Andy Cohen wanted to clear the air on this once and for all on May 17, and asked Carey about it on Watch What Happens Live. And Carey's response actually makes plenty of sense. She said, "That was so long ago, I can't believe people still make such a big deal about it." Then Cohen asked, "Do you know her?" and Carey replied, "No... You know what? I’m very forgetful," tossing some slight shade at Lopez, before she added,

Because I don’t remember the fact that it was just like "Hi! I’m so-and-so" and then move on... If I had never had a conversation with you, and someone asked me about you, I'd be like "I don't know him, but he seems cool," or, "I don't know him."

Cohen then asked, "Does she seem cool?" And Carey replied,

I don’t know her! What am I supposed to say? I’m not gonna put on a thing like "We’re all Hollywood and let’s just all pretend we’re best friends because we’re in that land." It's no offense to anybody. The question was about Beyoncé, and I was saying, "I think she's super talented, she's a friend of mine, she's super sweet..." and then they asked me another question… It wasn’t like I don’t know who she is. Of course I do. That's not the question.

Putting aside that obviously ~flawless~ Mariah shade, in my very scientific analysis of the Great Diva War of the '00s, I think it's entirely plausible these two ladies actually don't know each other. Just because they're in the same industry doesn't mean they really know each other. Surely they have met, and they likely attend the same events and run in the same circles, but it's pretty much the same answer I'd give if someone asked me about a person I graduated high school with and haven't seen for nearly a decade.

Of course Carey knows who Lopez is, but that wasn't what she was asked, so she gave an answer in the way only she could.

All shade aside, I think Carey and Lopez both have pretty stellar careers and overall lives to be happy about, so can we please put this "feud" to rest once and for all? Pitting pop divas against each other is so "déclassé"... right, Mariah?