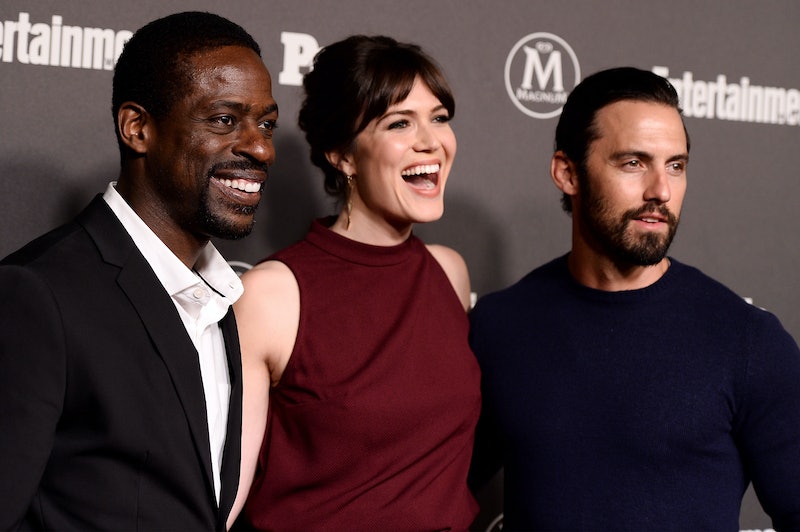 Are you prepared to transform into 90 percent tears, 10 percent human being? If not, please do not permit yourself under any circumstances to view the trailer for This Is Us, NBC's most eagerly anticipated new show, starring Milo Ventimiglia, Mandy Moore and Sterling K. Brown. Anticipation is skyrocketing for the show, with the trailer having over 17 million views in less than three days — an all-time first for a fall show. So when does Ventimiglia and Moore's new show premiere?

The show is an ensemble dramedy which focuses on a group of individuals who share the same birthday, are turning 36 and who lead wildly different lives. There are Ventimiglia and Moore's characters, who play a couple about to have triplets, Brown's character, who is is on the hunt for his father, Justin Hartley's character, a handsome actor (somebody give the guy an Oscar!), and Chrissy Metz's character, who is battling an eating addiction. Somehow, their paths cross, but the trailer leaves it pretty vague how. Still, it's been penned by Dan Fogelman who wrote Crazy, Stupid, Love, so you know you're just going to cry-laugh your way through this thing. Seriously, get stocking up on tissues now.

Short answer: as of yet, there's no firm debut date. However, we do know it's set to air in fall this year, so there's not too long to wait. Last year, NBC aired its first fall premiere on September 15 with Best Time Ever With Neil Patrick Harris and its latest premiere date fell two months later on November 10 for Chicago Med. Still, it seems unlikely that they'd keep audiences this eager waiting until November for This Is Us.

What else do we know? According to TVLine, This Is Us has been pencilled in for the 9 p.m. time slot on Tuesday evenings, which means it'll be going head to head with Fox's Scream Queens and Fresh Off The Boat and The Real O'Neals over on ABC. Since both Scream Queens and Fresh off the Boat also aired from mid-September onwards last year, it doesn't seem unlikely that both shows will be returning around the same date. So mid-September is looking very probable for This Is Us.

Let's cross our fingers, harvest four-leaved clovers and make sacrifices to the TV gods. With a setup that seems tailor made to have the audience cathartically weeping out the fall blues on their sofas, I'm not sure I can wait any longer than four months to see this show on the small screen.