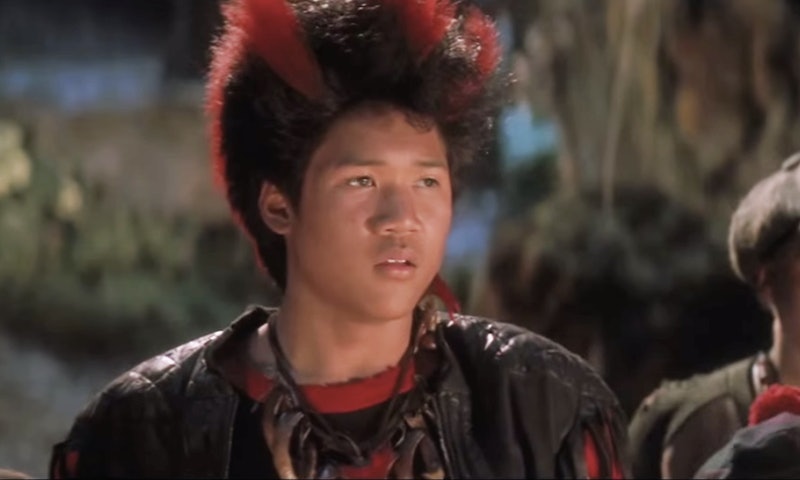 Hey, sit down for a second. You seem like a good kid, but we can't all be up-to-date on everything all the time, and I feel like you may have forgotten the one '90s heartthrob who doesn't get the love he deserves. I won't even make you wait for the drum roll, because this is serious business — I'm talking about Dante Basco, who played Rufio in Hook . I bet you were expecting one of your Jonathan Taylor Thomases or your Devon Sawas, but those baby boys get enough love. (Although, by all means, feel free to keep throwing love their way, because they deserve it.) Dante Basco is one of those overlooked gems who swooped onto my crush list as the mohawked leader of the Lost Boys in 1991, crowing out "Bangarang" the whole way, and never really left it.

I mean, that eye makeup? That battle cry? That ripped-to-shreds costume? That confidence? That loyalty to his fellow Lost Boys? That hard-shell exterior paired with that winning smile that you really had to earn but then was so so worth it that I'm swooning even now? Not to mention the fact that he went toe-to-toe with the legend that is Robin Williams. Come on. I was so hooked.

But when I talk to other people about the boys who made the biggest impression on them from those days, Basco's name never really comes up. Which is a damn shame because HELLO.

A the same time, I do get it, because Basco was far from ubiquitous. Unlike some of the other famous faces from that era, who cropped up every time you turned your head, Basco stayed pretty under-the-radar. He's had plenty of subsequent roles, working steadily right up to the present day, but he never made another movie that was quite as high-profile as Hook. However, to me, that just makes it all the more important that we celebrate his crush-worthiness now, because his appearances are so rare. He's like your high school crush who you looked for at every party, but who really only showed his face once a year at a major function, so you always knew it was special when he showed up, and that you had to make your interactions count.

These days, if you're interested in making up for your years of inattentiveness up to Basco, you can catch him in any one of the five projects he has currently filming or in post-production. Or you can listen to him voice Zuko on Avatar: The Last Airbender. Or you can just stroll down memory lane with me, back to a time when all you had to do to be a "bad boy" was wear a little fringe and throw a little red dye in your hair. Never forget.