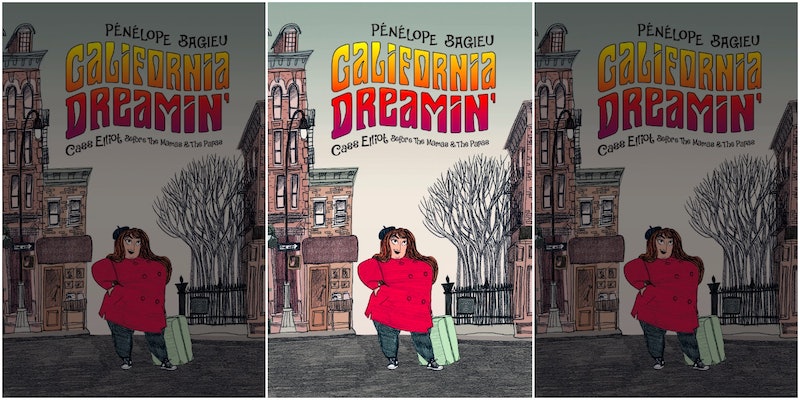 You've heard the song "California Dreamin" — but do you know the story behind the infamous tune? In her upcoming graphic novel, bestselling author and illustrator Pénélope Bagieu explores the life and legacy of Cass Elliot — aka Mama Cass from the famed '60s folk rock group The Mamas & The Papas.

Before she became Mama Cass, Elliot was just a Baltimore girl, trying and hoping for her big break in the glittering world of entertainment. After losing parts to stars like Barbara Streisand while auditioning for Broadway shows, Cass got her big break in an unconventional group called The Mamas & The Papas. In their three years of existence, they dropped five studio albums, and Elliot released five solo albums of her own after the group disbanded. She died in 1974, but this graphic novel brings her story to life in vibrant color. California Dreamin' details Cass's struggle to maintain her identity and hold fast to her dreams in the crazy, ever-changing world of music.

French author and illustrator Pénélope Bagieu's previous works include the graphic novel Exquisite Corpse , a delightful romp about a young woman, Zoe, who becomes embroiled in an insane literary scandal when she stumbles into the life of a world-famous (and supposedly dead) author.

Bustle is proud to exclusively reveal the cover for Pénélope Bagieu's latest graphic novel, California Dreamin', out next year. See it below!

California Dreamin' will be published on March 14, 2017 by First Second Books, an imprint of Macmillan.