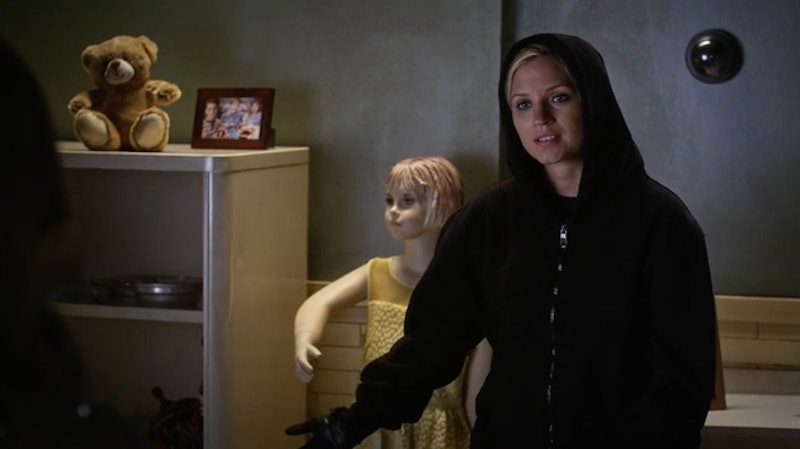 With so many jaw-dropping reveals in the Season 6 finale of Pretty Little Liars, it can be hard to rank them in order of most shocking. After all, this is the finale that not only saw Hanna get kidnapped by A, but introduced us to the forever-rumored "evil twin" of Jessica DiLaurentis, Mary Drake. However, while both Hanna's kidnapping and Jessica's double were no doubt major moments, the one that I can't quite wrap my brain around is Dr. Rollins' ultimate betrayal. It turns out that the secretly English Dr. Rollins only married Alison for her money (aww, poor Ali!) and that he was actually in love with the former Big A and Ali's own sister, Charlotte. So, it's worth wondering: Did Charlotte know about Dr. Rollins' plan to marry Ali, and steal away the Carissimi Group? This Pretty Little Liars lady may have been in the dark about his true intentions.

At the end of Season 6, it seemed that Dr. Rollins and Mary were working together to steal away the Carissimi Group, because, as Mary says, that's exactly what Charlotte would have wanted. Except, well, what if it wasn't? The biggest clue that Charlotte may not have been involved in the plan to steal away the money from the Carissimi Group has to do with her reaction to Ali telling her about her new relationship with Dr. Rollins. According to Ali, Charlotte seemed "betrayed" when Ali told her of their romance. Clearly Ali believed Charlotte felt this way because Dr. Rollins was her psychologist, but what if the truth was that Charlotte was in love with Dr. Rollins and had no idea he was wooing her own sister?

Charlotte knowing about Dr. Rollins and Ali's relationship would suggest that she wasn't as "reformed" as Ali believed her to be. While this is entirely possible, it's also possible that she was pretty close to overcoming her own demons, and that Dr. Rollins took advantage of her. Perhaps Dr. Rollins wasn't really in love with Charlotte at all, but wanted to use her to get the money from the Carissimi Group. When he realized that Charlotte was no longer in control of it, he moved on to Ali, keeping it a secret from Charlotte in the process.

If this is true, there's a big possibility that Dr. Rollins is far more evil than we expected. Perhaps it was actually Dr. Rollins who pushed Charlotte out of the bell tower, in hopes that she wouldn't mess up his plan to steal away Ali's fortune. It's super diabolical, but it does make Charlotte the victim in this situation rather than an unreformed villain — and I'm secretly hoping that Charlotte's life ended on a good note.