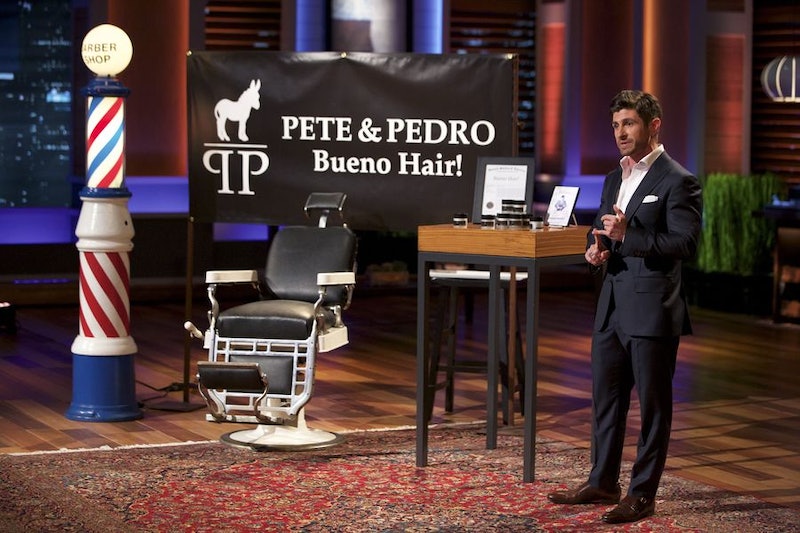 You don't need Shark Tank to tell you that people really care about how their hair looks, feels, and smells. But of course, watching Shark Tank only underscores that since so many products that come through those tall, scary doors have to do with what grows on top of our heads. Yet another haircare product will be featured on Friday night's new episode of Shark Tank, so that means there's got to be something unique about it. Well, let's find out a little bit more about Pete & Pedro from Shark Tank , and you'll probably be happy to know it's available now.

It'll be interesting to see how the Sharks react to Pete & Pedro, especially because the entrepreneur behind it seems to be a bit of a jokester. The beauty space is so saturated by huge corporations these days too, so I'm not sure they'd be so willing to invest in this company.

However, Lori Greiner will be in the Tank during Friday night's episode, and Pete & Pedro seems like the perfect company to invite on QVC. The majority of the Sharks are also men, and since this is a haircare line meant for dudes, Mark Cuban, Robert Herjavec, and Kevin O'Leary may pay more attention to it than other items for your hair that have appeared on the show in the past. Well, maybe not Kevin, considering he doesn't have much hair on the old noggin.

All in all, Pete & Pedro has a rather peculiar approach to its marketing, so its pitch in the Tank should be no different, and that smells like one entertaining episode to me! But before we get there, we should do some sniffing around to see what this company is all about.

These Haircare Products Do Wonders To Your Nose, Too

Pete & Pedro makes a variety of haircare products for men that will make your hair look great, which are all listed on its website. But the kicker with this company is that it also purports to have wonderful-smelling products. You could have the most exquisite-looking hairdo in the world, but if no one wants to be around you, what good is it?

Head over to Pete & Pedro's website, and you'll find a bounty of haircare products. There's things like a shampoo, conditioner, styling clay, pomade, and gel. These products are also available for purchase on Amazon, if that's more your scene. They all range from a retail price of about $16 to $25, which is not bad, as far as beauty products are concerned.

If you really find that you fancy these products, you can sign up to be a part of the Bueno Hair Club through the company's website, which just sounds delightful, even if you don't really need this stuff. Pick a product, and Pete & Pedro will ship it to you every four, six, or eight weeks. The Bueno Hair Club sounds like so much fun, I even kind of want to join it, and I'm not a man.

You'll Feel Good While Using It

And that's for reasons beyond superficial ones. There's a lot to love about how Pete & Pedro's products are made. They're paraben-free, made in the U.S.A., made from 100 percent recycled plastics, and haven't been tested on animals, just on little kids, according to the FAQs page of the company's website. But I'm pretty sure that last part is a joke.

Pete & Pedro Aren't Who You Think They Are

When I first heard the name of this company, I thought for sure that it was named after its founders. But boy, was I wrong! There's a "Legend of Pete & Pedro" described on the company's website that tells the tale of a boy named Pete and his loyal donkey Pedro, who, unlike most donkeys, had incredible hair. "It was so extraordinary that Pete would ride Pedro around town everyday, passing the time caressing his marvelous mane," as the story goes. But then one day, Pete got fed up with Pedro's superior coif and asked the heavens why it was so. Luckily, Pedro was kind enough to share his secret with Pete, who "maintained bueno hair of his very own" from that day on. Yeah... I don't think any of this story is actually true, considering this company likes to joke a lot, but it's a good read nonetheless.

The Company Was Actually Inspired By Humans

Though Pete & Pedro's logo features a donkey, it's actually the brainchild of two humans: Aaron Marino and Stephen Posta. Marino is the founder of the men's image consulting firm I Am Alpha M, and his Alpha M YouTube channel currently has more than 1.4 million subscribers. Marino also actually appeared on Season 4 of Shark Tank, as he describes in the above clip, but unfortunately didn't get a deal for his six-DVD series on styling for men. As for Posta, he's a hairstylist for Dyer & Posta Salon in Kennesaw, Georgia. The two got to talking about men's haircare products one day, and Pete & Pedro was born.

We'll have to wait and see if the company's personality or products help it win over the Sharks.