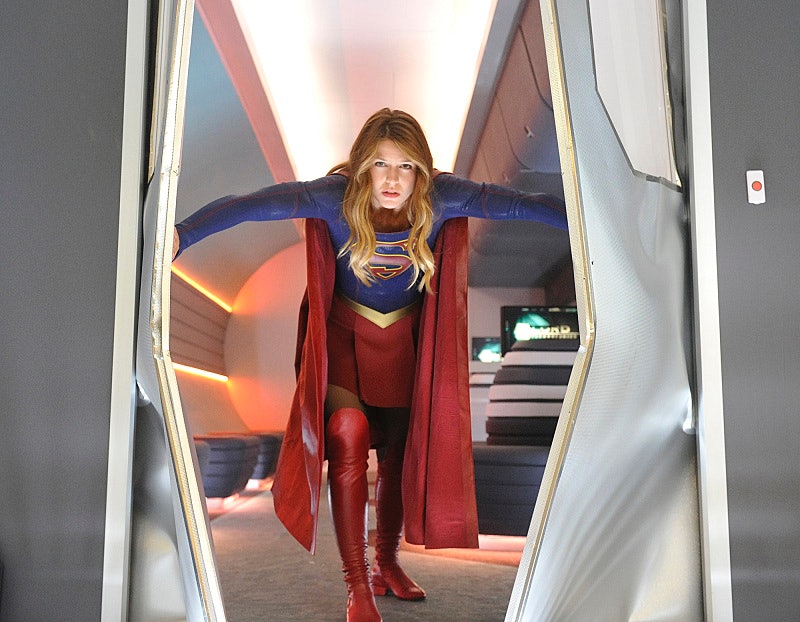 After crash-landing on CBS this past October, Supergirl premiered as the highest-rated television show of Fall 2015. However, now Kara Danvers is in for a whole new adventure. Following what may have felt like an unusually long wait for news of the Supergirl Season 2 renewal, CBS announced at the 2016 Upfronts that the female superhero-led show would be moving to the The CW — a popular teen demographic-based network — for its continuation. However, nervous fans can rest easy, because it appears that not much is changing aside from that. Just as CBS and The CW pulled off a seamless crossover between Supergirl and The Flash — Supergirl is fitting into the CW's Fall 2016 schedule just fine. In fact, the show will be holding onto its usual Monday night 8 p.m. EST time slot.

Replacing Crazy Ex-Girlfriend's original Monday night slot, Supergirl fans can happily continue watching the DC show without having to adjust to both a new time and channel. Instead, in what appears to be an attempt to not lose Supergirl's already dedicated fan-base, CBS will be replacing Supergirl's Monday 8 p.m. slot with The Big Bang Theory, and The CW is moving Crazy Ex-Girlfriend to Fridays at 9 p.m. That leaves Supergirl fans with a little more at peace with the switch and creates an almost entirely full week of superhero programming on the teen and young adult-based network. After all, Monday through Thursday's 8 p.m. slots for The CW include (in this order): Supergirl, The Flash, Arrow, and Legends of Tomorrow.

Aside from the time slot itself not changing, it seems like other factors of the show will be remaining the same as well. CBS President, Glenn Geller, assured fans that the show is essentially staying within the bounds of the same company. “I think it found the right home [at The CW]," Geller said in a press conference, "It’s a win-win for us. We co-own the CW and we made a great deal with Warner Bros.” He went on to say, "Who’s to say if we hadn’t made that deal that we wouldn’t have picked it up?” To me, that means that the show — despite a slight ratings drop — was doing just fine the way that it was. And that Supergirl doesn't need to change in and of itself in order to stay on the air.

In fact, The CW's President, Mark Pedowiz, is already setting the record straight about the future of the series with it's new network. “We are sitting down with Greg Berlanti and his team next week or so. We have a rough idea where they’re heading and, because our working relationship with Greg, we’re confident they understand what our needs are," he recently shared, according to Entertainment Weekly . “As for the tone or tonality of the series, they [CBS] did have a pretty successful series. The fact it’s now moved to The CW, where it should have been in the first place, I don’t think it will have a big impact on the tone.”

So, when can fans expect Supergirl to come swooping into her new home? It seems as if no official date has been set as of yet. However, the commercials for the new series will most likely be airing during The CW's regularly scheduled programming before you know it. Let the girl power continue.