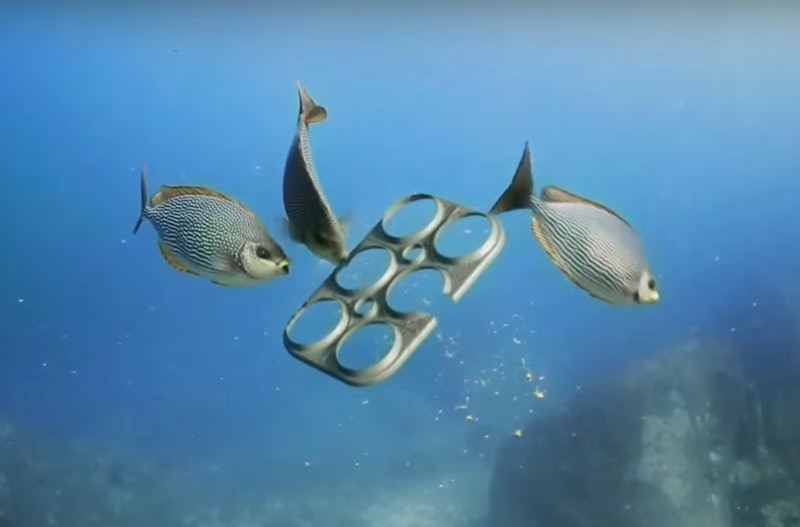 A small beer company in Florida is working to change beer packaging in a major way: Craft beer maker Saltwater Brewery has created edible six pack rings to replace the plastic rings that most beer companies use to package canned beer. Most plastic rings end up in the ocean, potentially harming fish, birds, and other marine animals that eat or get caught in them. Saltwater Brewery’s new rings are biodegradable and edible — so they won’t harm marine life if they end up in the ocean. Pretty nifty, huh?

If, like me, you were a Ranger Rick reader in the ‘90s, you probably already try to be careful to cut up plastic six-pack rings before you throw them out, in order to prevent sea animals from getting caught inside them. As one fisherman in a video about the edible rings points out, however, simply cutting up plastic six-pack rings isn’t enough — because animals will still ingest the plastic, which can be fatal. Plastic poses a major problem for marine animals in general. As the Huffington Post points out, research has shown that 90 percent of sea birds have ingested plastic, a statistic that is expected to only get worse; studies suggest that by 2050, every sea bird that dies will have plastic in its stomach. Plastic is similarly dangerous for fish and marine mammals, who can become trapped in it or eat it.

Saltwater Brewery’s new six pack rings are made of barley and wheat, byproducts of making beer. The environmentally friendly rings cost more to produce than plastic ones, but the brewery hopes that customers will see the extra cost as a fair trade for helping preserve marine life. “It’s a big investment for a small brewery created by fisherman, surfers and people that love the sea,” Peter Agardy, head of brand at Saltwater Brewery, explains in the video.

The people behind Saltwater Brewery hope to inspire larger beer companies to start using the biodegradable, edible packaging. They point out that if more companies started using the rings, the manufacturing cost would go down, making it more competitive with plastic packaging. Chris Goves, president of Saltwater Brewery, says in the video, “We hope to influence the big guys, and hopefully inspire them to get on board.”