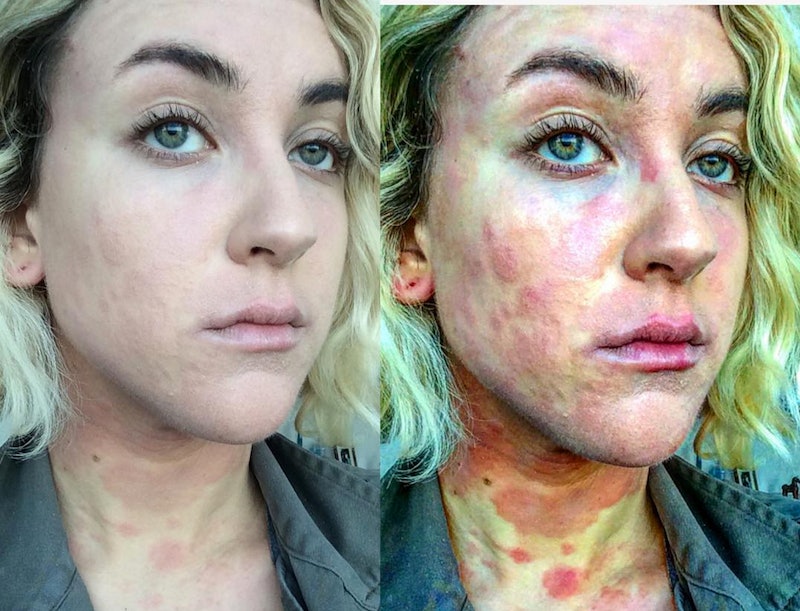 Ciena Rae Nelson is an actor, artist, and self-described “psoriasis warrior.” On Monday, she posted a powerful set of images revealing her struggles with psoriasis to her Instagram account. The photos have inspired many followers to share their own histories of psoriasis, and to praise Nelson for shedding light on a potentially debilitating condition that often goes unseen.

The National Psoriasis Foundation describes psoriasis as “an autoimmune disease that causes raised, red, scaly patches to appear on the skin,” often on the elbows, knees, and scalp. The exact causes of psoriasis aren’t known (although genetics and issues with the immune system are believed to be involved), but there are certain triggers that can lead it to flare up, including stress, skin injuries, and certain medications. About 30 percent of people with psoriasis will also experience psoriasis arthritis, characterized by swelling and pain in the joints. Psoriasis is not contagious.

On Instagram, Nelson posted two images of herself side-by-side. The left photo shows her wearing makeup, with her psoriasis barely noticeable. The photo on the right shows Nelson without makeup and with the color saturation enhanced to better portray what it “feels like” to have psoriasis. In her comment, she explains that psoriasis isn’t always obvious to people who aren’t dealing with it themselves. She writes,

Most people looked at the left in person and didn't notice much but dry spots here and there, not noticing what was really underneath. #psoriaticarthritis is an#invisibleillness and sometimes so is psoriasis (chronic itchiness and chronic fatigue). Not everything is as bad as it looks and sometimes things are actually much worse.

In a previous Instagram post, Nelson emphasized that psoriasis isn’t a superficial problem. “Skin conditions are not cosmetic issues,” she wrote. “They cause physical pain and suffering and oftentimes a feeling of being trapped in your own body, on top of the social anxiety many people face because of them. I personally struggle with sleep deprivation due to constant, widespread itchiness that feels more like I'm being stung or bitten then I am ‘itchy.’”

The impact of a skin condition like psoriasis on a person’s life isn’t limited to the physical. As Nelson suggests, it can have a major effect on your social life and how other people perceive you. “[P]eople think I’m flaky (no pun intended) because I don’t want to go out last minute depending on how I’m feeling,” she explained to Crystal Ro at HelloGiggles. “They don’t understand that I have to judge it day by day, and that they may not always SEE my disease but that doesn’t mean it doesn’t exist.”

Nelson’s advice to other people coping with psoriasis is fairly simple: “Hydrate. Get enough sleep. Eat healthy foods. Nourish your biggest organ, and all of the rest while you're at it.” To learn more about Nelson, check her out on Instagram. For more info on psoriasis, visit the National Psoriasis Foundation.

More like this
The Best Underwear For Sensitive Skin, According To A Dermatologist
By Alexa Vazquez
TikTokers With Eczema Are Opening Up About Topical Steroid Withdrawal
By Kui Mwai
Yes, You Can Buy Off-White’s New Beauty Range In The UK
By Tomi Otekunrin
Glossier’s New Olivia Rodrigo Campaign Is Giving ‘90s Groovy Chick
By Tomi Otekunrin
Get Even More From Bustle — Sign Up For The Newsletter