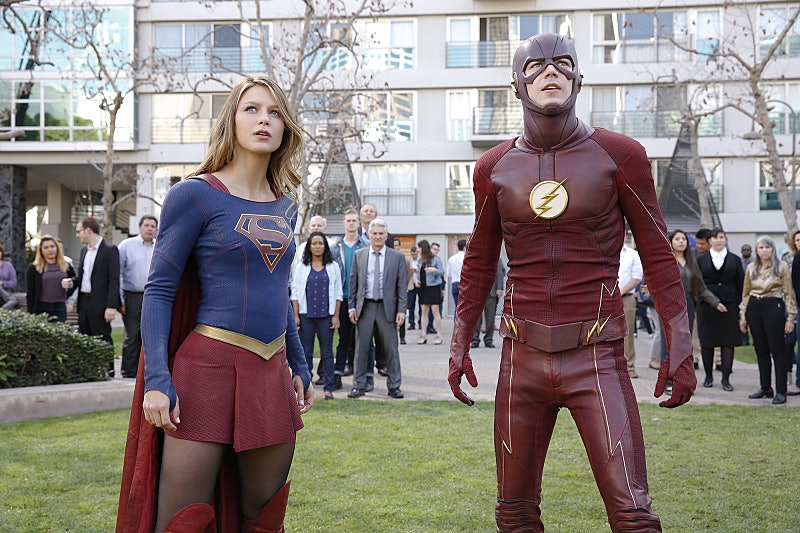 The Supergirl and The Flash's series crossover was just the beginning for the world of televised DC superheroes. Following the news that CBS' Supergirl will be switching over to the CW, the now superhero-filled network is hinting at what may be the biggest television crossover event ever. As in, a Supergirl, The Flash, Arrow, and Legends of Tomorrow crossover may be in our immediate future.

According to Variety, CW Chief Mark Pedowitz revealed the plans for a network crossover event in a network upfronts conference call: "Our [The CW's] annual crossover event this fall (will) be the biggest one ever." He also added. "Just imagine what our superhero crossover episodes are going to look like come December." So, what can we expect from a possible Supergirl, The Flash, Arrow, and Legends of Tomorrow crossover? Well, for one thing, there's going to have to be something big that brings all of these heroes together. Whether that means a mutual villain will be added into each episode, a major Earth-shattering event taking place, or someone stepping in and trying to control them or form some kind of alliance (kind of like Marvel's Agents of S.H.I.E.L.D), there's no way to know as of yet.

However, to avoid stepping on any other comic book company's toes, I'm going to assume that the heroes just going to be coming together for a couple of episodes on one major occasion. Sadly, I don't see DC Comics forming their own The Defenders-type series in the wake of Marvel's highly-anticipated Netflix series. In the meantime, despite whatever the superhero merging news might mean, DC Comics fans aren't the only ones wracking their brains for some new crossover ideas.

Amidst Pedowitz's joking comments, Jane The Virgin's own Gina Rodriguez managed to comment on how her show fits into all of this as well. While, unfortunately, I don't see Jane suiting up and fighting crime with the rest of them, I couldn't agree more in the idea of categorizing TV's unexpected new mom as a superhero as well. Because, hey, you try living one day of Jane's crazy life.

The ideas for crossover possibilities will continue running through my mind. Because, until we have some promos and official dates marked on the calendar, anything can happen.