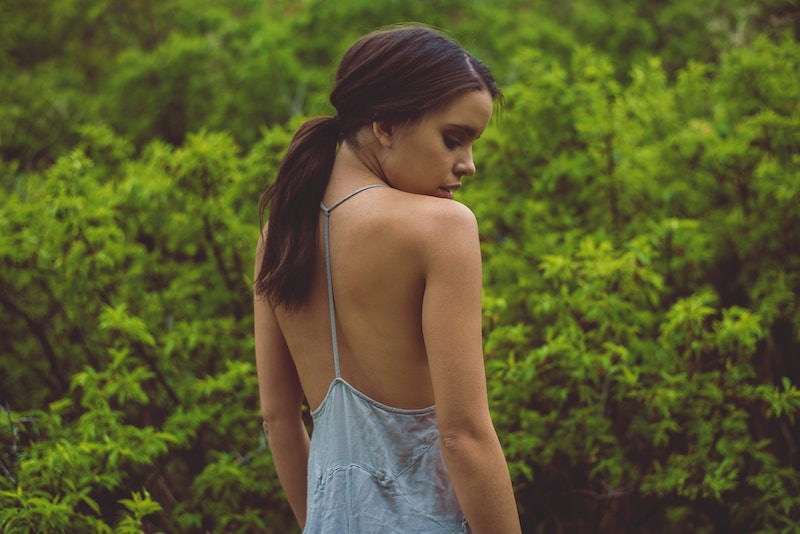 Obsessive compulsive disorder is often the butt of many jokes, with people claiming they have OCD because they have to keep their room clean or like to arrive on time. However, OCD is a real disorder, and there are a number of signs that someone is actually obsessive-compulsive. There's a difference between having routines you like and letting those routines control your life, so if you suspect you or someone you know may have OCD, it's important to pay attention to these symptoms and not make light of the disorder.

"OCD can be hard to diagnose because it often can be seen as excessive worry or generalized anxiety," says Cara Maksimow, LCSW, CPC to Bustle over email. "People experiencing intrusive thoughts often don’t share with others what they are feeling or thinking and try to control it themselves, which can create anxiety and build up stress, guilt, and even shame. Those negative feelings can reinforce the persons need to keep the thoughts and behaviors a secret from those around them."

Symptoms differ from person to person, but there are a number of common indicators that someone may have OCD. To help you better understand the disorder, pay attention to these 11 signs that you may be obsessive-compulsive.

"Obsessions are recurrent and persistent thoughts, urges or even images," says Maksimow. "When people have intrusive thoughts and urges, they find that the more they try to suppress the thought, the stronger it becomes."

"[People with OCD] are afraid of illness, infection, and /or contamination," says Eliza M Belle, PhD over email. "They usually have cleaning or hand-washing compulsions. May even wash hands so frequently that their skin becomes raw."

Compulsive habits can include checking the same thing over and over again. "They repeatedly check things that they associate with harm or danger," says Belle. "They may repeatedly check that the lights are turned off, doors are locked, electronics unplugged, parking brake on, etc."

4. Being Obsessed With Order

This goes beyond keeping your room tidy or staying organized. "[People with OCD] are obsessed with order," says Belle. "They may have superstitions about certain numbers, colors, or arrangements. They may align everything in the pantry to face the same way, with all labels turned in the exact same direction."

"Worriers and doubters are afraid that if everything isn’t perfect or done just right, something terrible will happen or they will be punished," says Belle. "They may perform the same duty over and over to ensure what they perceive as perfection."

Keeping mementos is one thing, but people with OCD compulsively hoard things that have little value to the them and are never used. " They fear that something bad will happen if they throw anything away," says Belle. "Some will stockpile items, including garbage, waste, etc to the point of living in deplorable conditions under the belief that they must keep everything."

Most OCD symptoms are mental, but they can be physical as well. "Some individuals with OCD may have repetitive eye blinking, facial grimaces, excessive throat clearing, or shoulder shrugging," says Belle.

Obsessive thoughts can go beyond just rumination, and they can include an overwhelming fear of something bad happening to the person. People with OCD fear they may hurt someone, and although these thoughts may be irrational, they are often disgusted and ashamed of what is going through their mind.

Over ten percent of patients seeking treatment for OCD have some type of sexual obsession as their main concern, according to Psychology Today. This can include taboo thoughts, questions about sexual orientation, or fears of engaging in inappropriate sexual activity.

Everyone has unwanted thoughts occasionally, but with OCD, these thoughts can't be controlled, no matter how hard you try. "Efforts to ignore or stop obsessive thoughts and images are not successful," says Manhattan psychologist Dr. Joseph Cilona. "The individual feel that they are intrusive and out of their control, and they feel unable to stop them despite their best efforts."

We ruminate about something from time to time, but when these thoughts begin to take over your life, it may be a sign of the disorder. "Obsessions and/or compulsions take up excessive amounts of time and interfere with the performance of activities essential to daily life," says Cilona over email. "The impact of this interference is significant and negative. For example, a person may have blisters and lose skin from compulsive hand washing or may lose their job because of being late so many times due to repeatedly checking to make sure they locked their house over and over."

If you suspect you may have OCD, it's best to visit your doctor to get a proper diagnosis.