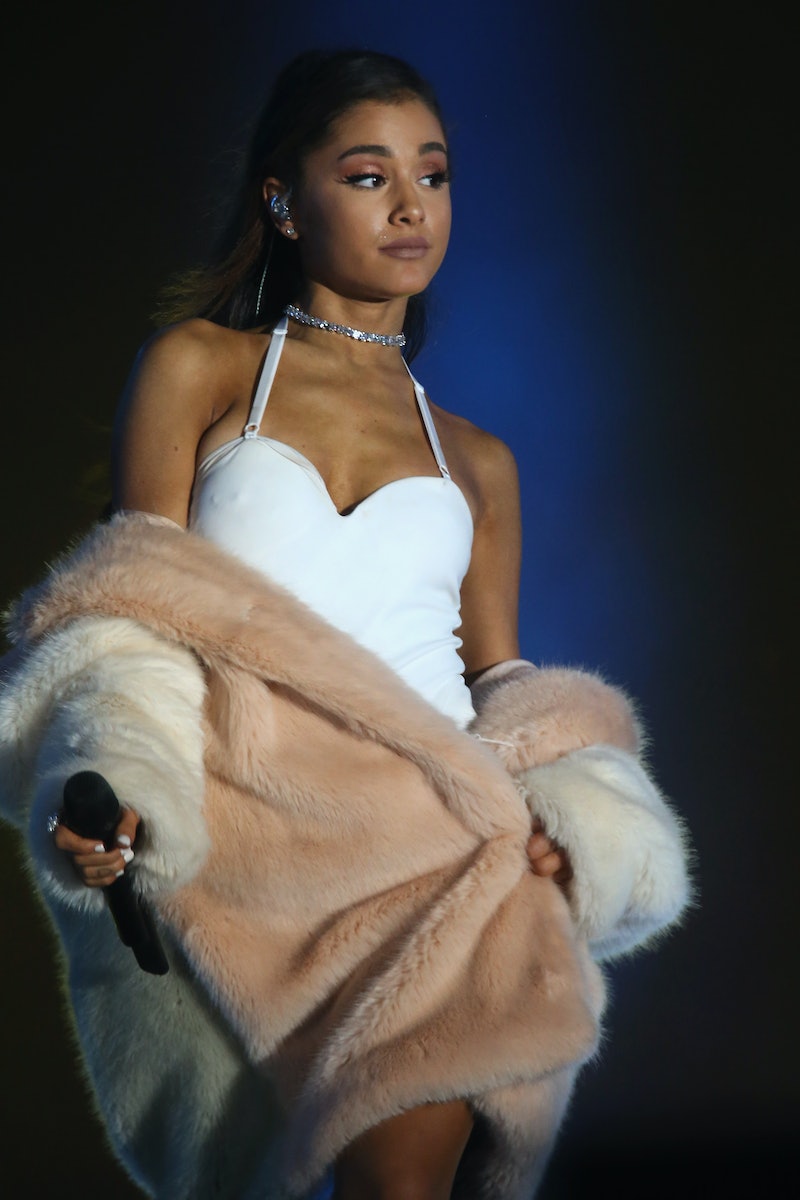 In case you hadn't heard, Ariana Grande is dropping her third album, Dangerous Woman, this Friday and it's gonna be major. This new phase in Grande's career — the sex positive, bold, boundary-pushing Grande — is part of the reason Dangerous Woman is garnering some early hype. One particularly startling image that accompanied this new era was the latex mask complete with oversized bunny ears that Grande began to sport. It's the kind of brilliantly shocking imagery that banishes any images of Nickelodeon wholesomeness in favor of a more grown-up pop star. It may also be the coolest thing I've seen any celeb wear in a long time. But are the ears just a stunt? Or are they here to stay?

"The Super Bunny 'is my superhero, or supervillain — whatever I’m feeling on the day... Whenever I doubt myself or question choices I know in my gut are right — because other people are telling me other things — I’m like, ‘What would that bad b*tch Super Bunny do?’ She helps me call the shots."

Let's be real for a moment: this is incredibly cool. Laugh all you want, naysayers, but could there be a better way to get people to pay attention that with a cheeky-yet-empowering get-up? I think not.

Grande as "Super Bunny" continues to bring her feminism to the forefront by openly channeling the reserves of power she has gathered as a pop star through this one seemingly weird accessory. As a feminist statement, the bunny mask mixes sex positivity with a dominatrix-style "control is power" vibe. What could be so dangerous about a woman in a bunny mask? Answer: a woman who uses a taboo piece of clothing to invite ideas of sex (thus owning her sexual nature) without actually saying it. She gets to maintain the upper hand, controlling how the public views her, even if its through something much more grown-up and a bit more odd than we're used to.

The "Super Bunny" mask may seem silly, but that's too simplistic a conclusion. Grande wants us to look at her but reckon with a different context of her. She's calling the shots in a voice she cannot use as herself. You may think she's kidding because of the bunny ears attached to that mask, but the mask demands she be taken seriously. Not only does it go back to that dominatrix/control idea, but it also reinforces the "sexy vs. sweetheart" nature of being a female pop star.

The public wants the good girl and the bad girl all rolled into one woman. Oftentimes, it's hard for an actual pop star to reconcile the two. As "Super Bunny," Grande brings the two desires together and, from the early album reviews, it appears that she is able to fully come into her womanhood and explore what it means to be dangerous, in and out of control, good and bad. "Super Bunny" simply externalizes those internal struggles and turns them into visions of an empowered woman.

In short, we need more "Super Bunny." If this new alter ego helps Grande feel empowered, then hats off to her. This one small change in image puts Grande leaps and bounds ahead of her contemporaries. She's making a statement with her alter-ego that is easily embraceable: It's not about how you call the shots, it's that you're calling them at all. Keep doing you, Ariana "Super Bunny" Grande. Keep doing you.

More like this
The Prince William & Rose Hanbury Rumours, Explained
By Frances Stewart and Sam Ramsden
UK Viewers Will Have To Wait To Watch The Handmaid’s Tale S5
By Maxine Harrison
Help! I'm Not Getting Any Attention On Dating Apps. What Can I Do?
By Sophia Benoit
The 12 Best Strapless Bras That Won’t Slip & Fall Down
By Audrey Williams and BDG Commerce
Get Even More From Bustle — Sign Up For The Newsletter