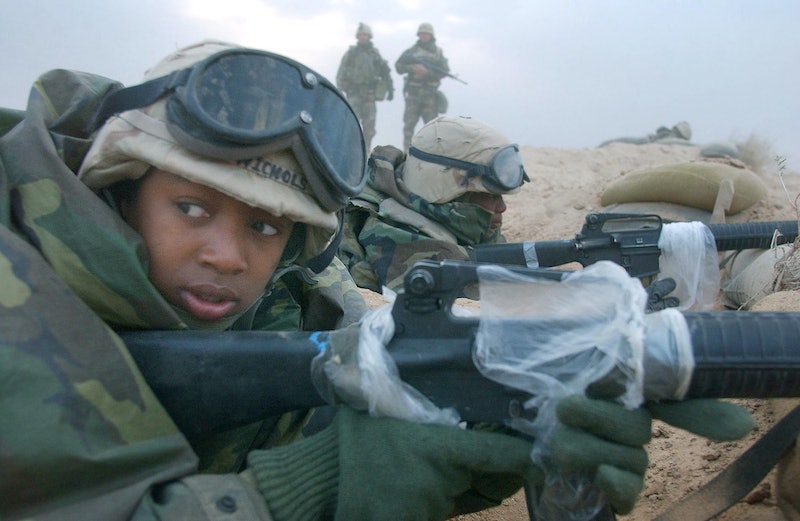 On May 17, Senate Majority Leader Mitch McConnell said that he believes that women’s role in the military has expanded so broadly that women should be required to register for the draft, like men, when they turn 18. McConnell is hardly the only prominent Republican who thinks women should play a bigger role in the military, and overall, a majority of his colleagues in the Senate agree with him. Last week, the Senate approved a military bill requiring women to register for the draft.

But not everyone is on board. Former presidential hopeful Sen. Ted Cruz said in February that those who believe women should have to register for the draft are "so addled by political correctness that they think we should put our little girls on the front line.” After the Senate vote on Tuesday, Cruz added, "I could not in good conscience vote to draft our daughters into the military, sending them off to war and forcing them into combat.” There now may be a battle between the House and the Senate to resolve whether women should be drafted, as the House's version of the bill does not include the provision.

In April, Rep. Duncan D. Hunter (R-California) introduced an amendment to the House’s annual defense authorization bill requiring women to register for the draft. However, as The Washington Post reported, Hunter "is against the Obama administration’s recent policy change allowing women to serve in all combat roles" and "said he proposed the measure only to start a discussion about the draft." Hunter voted against his own amendment, but it passed by a 32-30 vote. Ultimately, the House Rules Committee stripped Hunter’s amendment from the bill, with the committee's chairman, Rep. Pete Sessions (R-Texas) saying a policy as “reckless” as requiring women to register for the draft needed closer examination.

With two versions of the bill approved by the House and the Senate — namely, one with the requirement that women register for Selective Service and one without — they "will now be reconciled in a conference committee ... where a contentious debate is expected," The New York Times reported.

U.S. women have already been serving in combat roles for decades. Between 1990 and 1991, more than 40,000 women were deployed to fight in the Persian Gulf War. Fifteen of those women were killed, and two were imprisoned by Iraqi forces. In the Afghanistan and Iraq wars, 156 U.S. servicewomen have died. As Jill A. Rough, an adjunct professor at George Mason University who has served on active duty in the Navy and as a production manager in Afghanistan, tells me in an email: “Any woman in the military who served in Iraq or Afghanistan can tell you they were just as likely to have been hit by an improvised explosive device (IED) as the combat-qualified man sitting next to them.”

In December 2015, Defense Secretary Ashton B. Carter announced that the Pentagon would officially open all combat jobs to women. Women are now eligible to hold any job in the U.S. military, and they have taken on some of the most elite and demanding ones. There are currently female Army Rangers, snipers, and Marines. Carter also said last year that the military would begin developing a plan to allow transgender people to serve openly which would be unveiled in spring of this year, but that has yet to happen. Pentagon spokesman Peter Cook told Military Times in June that “there has been progress in terms of trying to consider how to move forward and resolve this issue,” and that “there have been significant conversations within the building on that front.”

When the requirement for women to register was being discussed before the Senate Armed Services Committee earlier this month, Sen. John McCain, the committee chairman, voiced support for the provision:

I reached out to the Selective Service System for more information on women potentially being included in the draft. The organization responded with a statement released June 20 by Richard Flahavan, their Associate Director of Public and Intergovernmental Affairs:

As you may know, the House of Representatives recently passed the National Defense Authorization Act for 2017 which does not include the registration of females with the Selective Service System; however the Senate did include this provision in its version. Consequently, the two bills must go to conference to work out the differences. The conference committee gathering is not scheduled. Because Selective Service is already registering men ages 18 through 25 today, it can register women if authorized by law and provided with some modest resources — about 39 additional full-time employees and approximately $8.5 million dollars. Selective Service is a service organization and performs the tasks given it by the President and Congress; policy decisions are the domain of our elected officials.

While the Selective Service System did not share its thoughts on whether women should be drafted, I decided to ask women who have served in the armed forces or studied military policy for their thoughts on the possible change.

Jennifer Lundquist, a professor in the sociology department at the University of Massachusetts at Amherst, tells me that McConnell's statement about mandating that women register for the draft "is perfectly consistent with the Pentagon's decision to extend full military participation to women as well as men" because "it follows that the draft … would apply to women, as well.”

Rough echoes that sentiment: “Given the fact that the military has now opened all of its jobs to women, it makes logical sense to have women register for selective service — just as men do.”

In fact, nearly all the women I spoke to for this article felt that women should have to register for the draft as long as the U.S. maintains one.

Theresa Larson, who runs a physical therapy company in San Diego, authored a book called Warrior , and served as a first lieutenant in the Marine Corps, also tells me that McConnell is “right on.” Larson, who is in favor of women serving in combat arms roles and special operations units, says, “If we’re fighting for women’s equality, they have to be subject to the draft.”

Maura Walsh, author of Through My Eyes: A Story of a Teenage Female at War and who was among the first U.S. soldiers sent into Iraq in 2003, shares this belief. “Although war is never in the best interest of anyone, being required to register for the draft shouldn't be segregated by sex.” Nancy J. Walker, director of the Program on U.S. Foreign Policy in a Global Era at the Elliott School of International Affairs at George Washington University, agrees: “As long as there is a draft, I see no compelling argument against requiring women to register. Equal treatment must apply.”

However, the nonprofit Center For Military Readiness is vociferously opposed to “drafting unsuspecting girls-next-door,” as its website states. Its president, Elaine Donnelly, tells me in an email that she's concerned about military recruitment and retention if women are eligible for the draft. She describes the House Rules Committee's deletion of the provision that women register for the draft as "the responsible thing," and expresses hope that the provision will fail in the Senate as well.

In contrast, Rough believes that drafting women is vital for creating the strongest military. She tells me that "only a small percentage of Americans are mentally, physically, and legally eligible to serve in the military. [Excluding] half ... because of their gender would be detrimental to the security of the United States in the event of a national emergency.” She adds that, “Arguments against requiring women to register appear to be driven by personal opinions about the role of women in society, not by considerations of what the country would need if the United States was ever required to use the selective service system again.”

Some of the women I spoke to who support the draft applying to both sexes offer different justifications and caveats.

Erin Solaro, author of Women in the Line of Fire, has studied American servicewomen in Iraq and Afghanistan. She says: “If men are required to register, so should women. But I do not believe men should be required to.” Moreover, Solaro thinks that women who have children should be exempt from any draft. If the draft is ever reinstated in the United States, she believes that “women who give birth — by far, the most difficult, dangerous, and painful thing the average human being ever does or takes part in, and that includes all but the most elite, tip-of-the-spear military service — should be automatically exempt.”

Walsh, too, brings up mothers. But she doesn't necessarily think a parenthood exemption should apply exclusively to women. “Being a woman who has served on the front lines myself, I wouldn't wish for a woman with children at home to have to give up the rights to her children and go to war," she tells me. "But I'm sure men feel the exact same way.”

Anne P. Mitchell, an attorney who has served in the Army and is the president and CEO of the Institute for Social Internet Public Policy (ISIPP), tells me that part of her reason for supporting women being drafted is to make things fairer for both sexes, rather than just open more opportunities to women. Mitchell tells me in an email that she “absolutely agrees that to the extent that anyone should be required to register for the draft, women should be required to register for the draft."

Her reasoning? “This is not so much a women's rights issue as a men's rights issue," she says. "It is absolutely not fair that men are viewed as disposable in this way, while women — who have come so far in our efforts to be equal — get some sort of special dispensation as 'the fairer sex' who need ‘protecting.’”

Before U.S. women can be required to register like their male counterparts, the Senate and House will have to reconcile their different versions of the legislation in conference, which is expected to occur some time in the "next several weeks or months," according to the Weekly Standard. Whether drafting women will make the final version, people are already discussing it as a legitimate — and perhaps necessary — change.