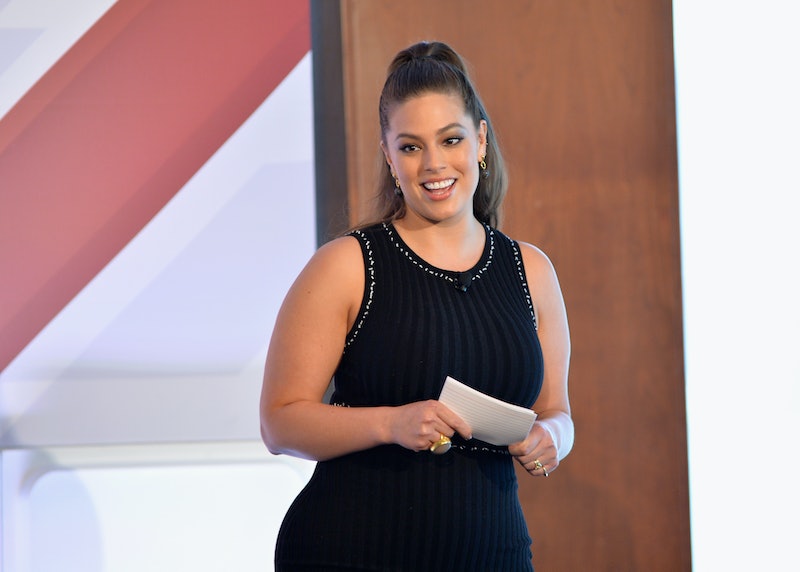 It looks like a Jonas brother has scored a seriously gorgeous girlfriend — well, onscreen anyway. Joe Jonas' band DNCE just dropped their video for "Toothbrush," and it features a video vixen who may look familiar. The video, which is a love letter to a woman that the singer wants a real deal relationship with (hence giving her permission to leave her toothbrush at his place — what a gentleman!) features Jonas and model Ashley Graham rolling around in bed, looking entirely too good to have just woken up. So who is Ashley Graham, other than the woman practicing good dental hygiene in Jonas' video? You probably already know her name, because her career has been seriously impressive so far.

The 29-year-old Graham is a rising star in the modeling world, and has been working steadily for several years now. She also uses her platform as a model to advocate for body positivity and acceptance in society. In May of 2015, Graham — who has modeled for Addition Elle's fitness line, Forever 21, and Swimsuits For All — decided to take her commitment to body positivity one step further and give a moving TED Talk about what it's like to be a bigger girl in an industry that celebrates thinness. There, Graham stated that she's so over the term plus-size: she believes that beauty comes at every size, and that the term is an unnecessary way to categorize people based on their measurements. Amen.

In 2016, Graham made a huge leap for body diversity when she was cast as a Sports Illustrated swimsuit model — something that, upon finding out she booked, caused Graham burst into tears. Though Graham had starred in an ad campaign within the pages of Sports Illustrated, 2016 marks her first time in the magazine as an editorial model. It's a move that shows the world that beauty comes at any and every size — though really, all one needs to do is watch the "Toothbrush" video to see how gorgeous Graham is in her own skin.

Check out Graham's appearance in the steamy video for "Toothbrush" below: