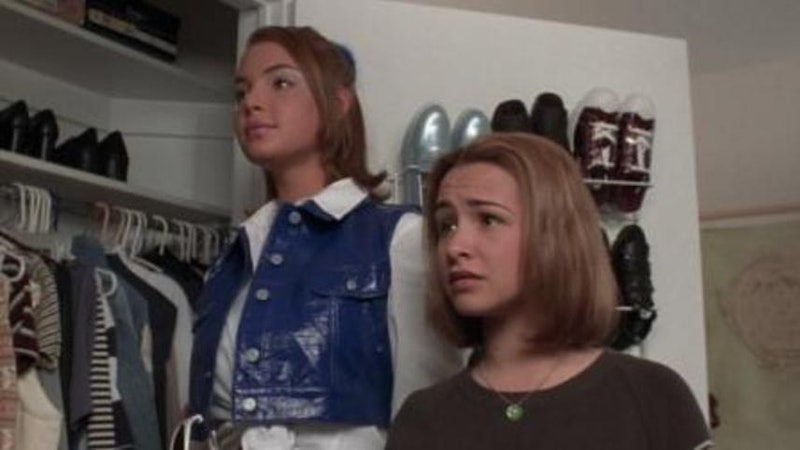 There's nothing quite like revisiting the classic films of your childhood. Sometimes, during a nostalgia-filled marathon-sesh, you find yourself watching one of these films when it suddenly dawns on you: "Oh my god. This film is actually really weird and ridiculous!" Such is the case of Wish Upon A Star , featuring a then-unknown Katherine Heigl and Danielle Harris (aka Debbie Thornberry). The year was 1996. The channel was unmistakably Disney. And yet... and yet there was something so seriously afoot in this film it's now very weird to watch.

Wish Upon A Star was one of the last films shown on the Disney Channel before the original films we've come to know and love started airing. It's reminiscent of the wild, punkier, weirder and legitimately very-feminist vibes of the teen films of the mid-'90s. Back in these Wild West Disney days, anything went — and boy, it went. There's some great things, ridiculous things and just plain '90s things happening in Wish Upon A Star and it's just so weird to realize when you rewatch it. Aided by the Freaky Friday-body switch plot device, the film shows how sisters Alexia and Hayley Wheaton — polar opposites in every way — actually stand to learn a lesson or two on how to treat one another and mature properly. Well, "properly" has a pretty loose definition in some cases, as you'll see below.

2. Getting Hickies Is A Now Weird, Very '90s Thing

Remember when it was verboten yet super chill to sport a love bite from your beau? It said, "Yes, I'm a passionate person and I have the mark to prove it." Ahh, the good old days. Now, having a hickie just looks a bit weird.

3. Putting Your Gum Wherever You Want Is Gross

It's never OK to just plop your wad of gum wherever you want. Hayley definitely got some slob points for this repeatedly gnarly habit. Please stop, Hayley. It's not cool.

4. Alexia Wheaton's Wardrobe Would Have Never Flied At Most High Schools

Alexia is totally killing it, though.

I mean, not to shame anyone, you do you girl. But weren't they in high school?

6. What The Heck Was Up With Those Parents

Every good teen movie has a pair of totally out-of-touch parents. Alexia and Hayley's parents were no different. Their "hands-off" approach to parenting seems a little too reckless by modern standards, though, leaving me — and I'm sure many other viewers — with the strong urge to shake some sense into them.

7. It's Still Really Cool To See Sisters Helping Each Other

Let's be honest: sisters who work together, win together. Even though they majorly sabotaged each other during big events in each others lives, seeing the Wheaton sisters actually come together is still heartwarming.

8. Letting Hayley Find Her Own Prince Charming Is Still Charming

I am pro-"Simon and Hayley" until the day I die. Simon was the sweetest boy next door (remember how he made cookies for Alexia?) and it was great to see him give Hayley a second chance.

9. Watching Hayley-As-Alexia Destroy The Patriarchy Is Still So Satisfying

With Hayley in Alexia's body, we got to see some awesomely badass moves: sabotaging prom pictures, repeating outfits and not giving a damn about her appearance and, brilliantly, stopping the negative behaviors running rampant in her friendship group. Keep doing you, Hayley.

A female-fronted punk band at prom was a trend in '90s teen films (I'm looking at you, 10 Things I Hate About You) and things were no different in the case of Wish Upon A Star. The band featured here is the brilliantly named Moonpools & Caterpillars and they are a seriously great (but seriously '90s) addition to this prom scene.

11. You'll Never Get Tired Of The "We Magically Switched Bodies And Learned To Appreciate Our Differences" Plot Any Time Soon

Who doesn't love a good body-switching in a movie? I know I do. Bring on the hijinks!

Wish Upon A Star is officially 20 years old and also officially one of the gutsiest original films to have ever aired on Disney. It's definitely still worth the watch and will satisfy that nostalgia craving. Who's ready to re-watch it with me?