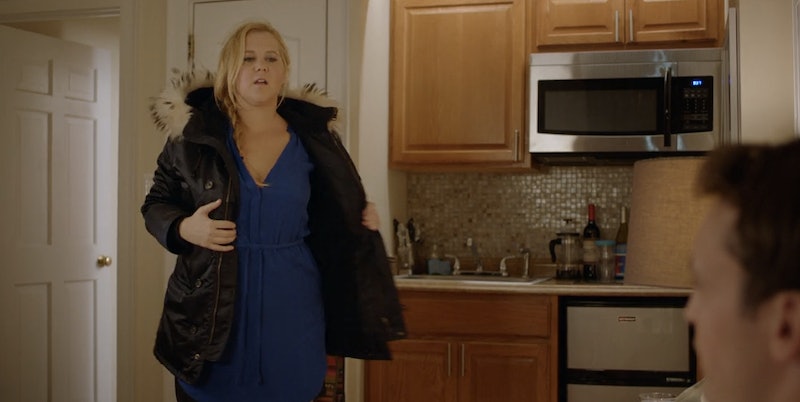 Inside Amy Schumer knows just how to articulate all of those wonderful — and frustrating — aspects of being a woman. During Thursday night's episode, the sexually frank comedian finds herself in bed, getting ready to sleep with a new beau who keeps confusing her. Titled "Madonna Vs. Whore," this Inside Amy Schumer sketch highlights the mixed signals and expectations women get from men and it's all too accurate. Throughout the skit, Schumer's character is kept guessing by the guy and wonders if he wants her to play the virginal Madonna in bed or, well, the so-called "whore," which I'd rather think of as the sexually confident woman she should be proud to be.

But every time Schumer turns on the charm and gets ready to get dirty, her man voices disapproval or pulls away, causing her to simply be less. He passive aggressively insults Schumer for already having condoms ("It's kind of nice not to have to jump through to get you into it"), talks her into not using one, and pushes her into saying she's only been with two other guys. He talks down to her ("You're like a baby sheep"), yet keeps calling her "dirty girl." When he asks her to strip for him, he makes Amy put on all of her clothes — including her coat — and disapproves when she displays some naughty moves. So instead, she pretends to be awkward and weird as she strips and, finally, he's into it. When Amy asks him if he wants the "Madonna" or the "Whore," the man answers, "Both."

He continues: "I need you to be a sexual Good Will Hunting. You have no formal education, but then you see my dick and just get it. You're like Dora the Explorer, but your passport is just filled to the brim." I don't know about you, but I've personally dealt with these types of men a lot and they're so frustrating. When you act like the "good" girl, they get bored, but when you're confident about what you want, they pull away and get scared.

Amy Schumer may not have nailed down what this guy wants exactly, but she definitely got the portrayal of this type of man totally right.