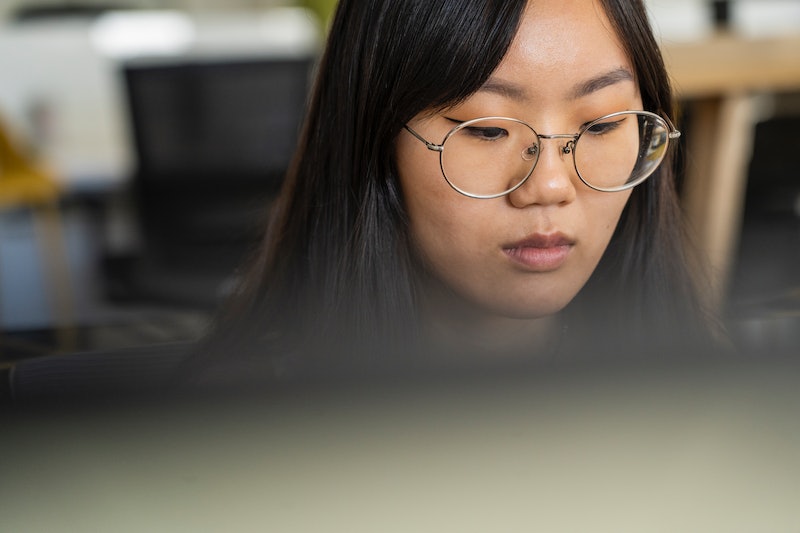 Your eyes may not necessarily be the window to your soul, but they're definitely going to cause your body a lot of annoyance if they have a mysterious malady and you don't get it treated. Obviously, if you suddenly lose vision you need to go to hospital immediately; but there are more subtle signs your eyes may not be perfectly healthy. Something as simple as "suddenly squinting more when it's sunny outside" may need professional attention, though if you've got a hangover that's likely to blame.

The eyes are incredibly complex instruments, and they can go wrong both in themselves and in response to shifts in bodily health. That relationship can be as simple as getting double vision after you've been knocked on the head, and as complex as eyes drying out when you get pregnant. Knowing the potential signs of a serious eye issue and getting them fixed properly may end up saving you from something truly serious, because eyes, along with their complexity, are also delicate. And while we're in an exciting new age of bionic eyes and medical sight restoration, you really don't want to let it get to that point.

Here are eight symptoms that you shouldn't ignore when it comes to your eyes, whether you're blessed with 20-20 vision or have prescription lenses thicker than window panes.

The medical term for eyes that begin to bulge out of their sockets is "exophthalmos," which is a mouthful. They're definitely a medical emergency no matter how you say it, though. Eyes that protrude from the socket are often being pushed out by some force behind them, like swellings in the tissue or muscles, which can be a sign of various things; but they're most commonly caused by thyroid eye disease, which causes inflammation in the material behind the eye. However, they're also associated with other conditions like eye infection, tumors, or blood vessel issues behind the eye, and they need to be checked out immediately.

There's an important caveat, though: if you've always had slightly protruding eyes, as have other people in your family, and haven't encountered any problems (like dryness or redness), it's likely not anything to worry about. Sudden protrusion is the area of worry for doctors.

Seeing double? You need to get yourself to the hospital. And it's worth knowing that double vision can be across both eyes, or centered only in one; if you're experiencing it, cover both eyes one after the other to identify which one is having the issue. Double vision, despite what you may have seen in cartoons, isn't just caused by a blow to the head; it can also be a sign of underlying medical conditions requiring attention.

Double vision can be caused by a wide range of things, from problems within the eye itself (like the cornea or the retina) to ocular muscle weakness, diabetes, brain issues, or nerve conditions. And yes, traumatic brain injury is on the list.

3. A Sudden Increase In Eye "Floaters"

All of us have "floaters": small particles of debris that float within the vitreous humor, the substance that fills the eyeball, and cast tiny shadows onto the retina. They're nothing to be concerned about in and of themselves. But if you see a sudden increase in them, or if they suddenly become very noticeable and accompanied by strange "flashes," you may be experiencing issues within your eye itself.

Increased perception of floaters is associated with two different types of conditions: retina detachment, and posterior vitreous detachment. They're both located at the rear of the eye socket. The retina can become detached from the nerves and tissue behind it, and the vitreous membrane, which normally lies between the retina and the vitreous humour of the eyeball, can come unstuck from the retina. Both tend to produce large varieties of floaters as they interfere with vision, and they can be caused by serious head injuries, age, eye infections, or a bunch of other things. (Full disclosure: my husband whacked his head and has had posterior virtuous detachment ever since, and I can tell you it's no joke. Go get it checked out immediately.)

If you've always been a bit sensitive to light, it's likely not a real problem; people with light-colored irises, like blue or grey, often tend to be more likely to squint when they step from shade into sunlight, because their lack of pigmentation means they don't have as much protection against glare. But light sensitivity, also known as photophobia, may not be all about your baby blues, particularly if it comes out of the blue (so to speak).

Increased light sensitivity is a predicted response to some heart medications, which is nothing to worry about (and you'll likely be well forewarned); but it can also be a symptom of eye inflammation, corneal issues, conjunctivitis, or meningitis. If it persists, find an optometrist.

This one's fairly straightforward, and if you've ever spent time around children you'll know what it is immediately: if the whites of your eye start to become pink or red, chances are you've got conjunctivitis, or pink-eye. Conjunctivitis can actually be caused by a range of issues, from an allergy that inflames the very front of the eye to exposure to an irritant, though the bacterial version is probably the most famous, as it's highly contagious. Wash your hands and don't touch anything.

Redness can come from other sources: if it's just one part of your eye that looks extremely bloody, it's probably a burst blood vessel, while overall redness and pain may mean an ulcerated cornea or an inflammation of the iris. All of them are pretty easy to treat, but they need good medical attention to get in there early.

There are actually two particular types of problem that can cause small lumps on eyelids: hordeolua and chalazions. The first is better known by its normal name of a "sty," or an infection of the eyelash gland on the edge of the eye, while the second sounds like a Hogwarts mascot but is actually a lump in the middle of the eyelid due to a blocked gland. Chalazions are usually painless and sties usually, well, aren't.

Both of these swellings are more common in people with diabetes, though they're also pretty normal among people with no such underlying condition — but they do need to be treated. Don't try to lance them yourself, because that will not end well.

Shifts in the moisture levels of your eyes likely won't be fixed by shifting your intake of liquids. It's more probable that they're related to issues in the eye itself. Dry eyes can be caused by everything from wearing contact lenses to just living in a hot place, and effectively mean that your eye isn't producing enough tears to keep the surface of your eye moist. Over-production of tears, meanwhile, may mean an oversensitivity to shifts in pressure or temperature, or an irritation of the tear ducts.

Interestingly, both are related to hormonal levels, which means you may experience shifts in eye moisture during pregnancy or changes in your contraception. Just because they're likely not serious, though, doesn't mean they don't need medical treatment to keep them from getting worse or causing major issues down the line.

These can be terrifying, but as many migraine sufferers know, visual illusions, like blind spots, waves and dots, aren't all that weird: they're an indicator that a migraine is coming. The visual distortions are known as an "aura". The good news is that most migraine auras are considered perfectly harmless; they'll pass in about 30 minutes, and though they're generally followed by a killer migraine headache, they leave no lasting damage.

However, there are exceptions: Everyday Health reports that studies have shown a link between long-lasting, frequent migraine auras and the risk of strokes, particularly in women who are over 45. So if you're getting auras really frequently, it's worth seeing a doctor about trying to lower your stroke risk. Plus, there's a particular type of migraine vision problem that can be very serious: temporary, total, or near-total blindness. That's called a retinal migraine, and it's a big issue that needs to be checked out immediately. Basically, any kind of blindness means getting to the hospital ASAP.