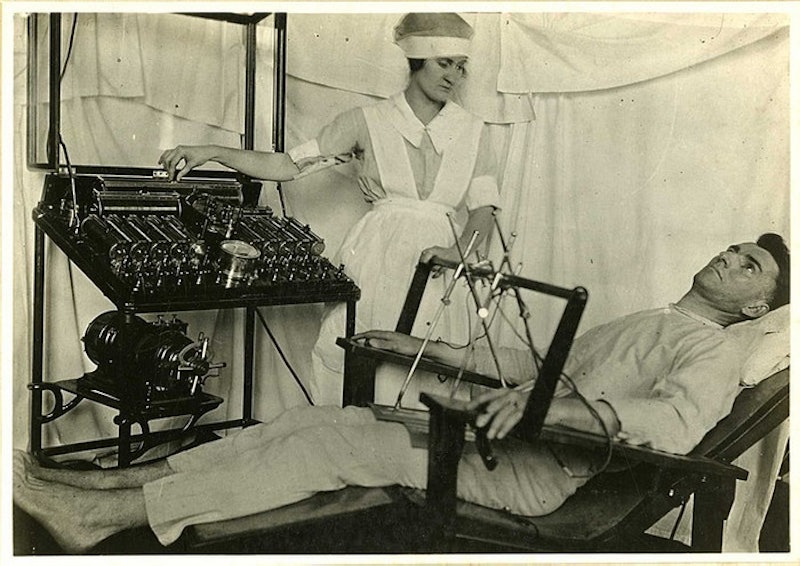 History is packed full of grotesque medical instruments designed to haunt your nightmares. If you're feeling queasy, for instance, it might not be a good idea to check out fleams, instruments created purely for the medical procedure of blood-letting, or cutting veins to relieve symptoms with gushes of the red stuff. (Even more charmingly, fleams were occasionally used in conjunction with "bloodsticks," or small hammers to poke them hard into a vein. Lovely.) But sometimes, the inventiveness of medical professionals overstepped the boundaries, and trespassed into the realm of the purely weird. Resurrection machines and centrifuges for anti-aging, anybody?

Of course, it's easy to laugh at the more bizarre side of medical innovation, but you've got to remember that the forefront of medical knowledge in the 21st century is frankly mind-boggling at the best of times. Genome sequencing? Stem cell therapy? Dude. Scientific breakthroughs have an interesting way of becoming everyday; X-rays were once remarkable, and now nobody gives them a second thought. These particular inventions earn the label of "weird" instead of "genius" largely because, well, they didn't work.

Here are six of the most bizarre medical inventions in the history of human illness. Be very relieved that nobody's going to try and cure your cholera by wrapping you in a cloak and puffing steam up your nethers.

Let's start with a disgusting one. The concept of creating small holes in the skull has had an incredibly long and illustrious tradition in Western medicine, and for most of its history it was done without anaesthetic. (Yes, you are allowed to be squeamish about this.) From ancient physicians like Hippocrates, who thought that every fracture of the skull needed a hole bored near it in the first three days, to Prince Phillip of Orange, who went through the process a stunning 17 times, it's been around for thousands of years. The kit was varied: some physicians drilled through the bone of the skull, while others scraped until a hole gradually formed. Either way, though, no thank you.

The idea of a bath you could carry around with you under your cloak is actually pretty innocuous. The Wellcome Collection, a library of some of the world's weirdest medical apparatus, has a brilliant specimen of Captain Jekyll's Portable Vapor Bath, dating back to 1828. It was, according to the sales material, of "great utility" when it came to "cholera morbus of the East Indies, and the Yellow fever of the West Indies, and in rheumatism".

If you wanted to get in on Captain Jekyll's game, you'd be provided with a floor-length cloak of oiled sink, a chair with various apparatus underneath, and a pipe to the nearest pot on a fire. The pipe, presumably, transported steam underneath your cloak, so you could sit neatly in your own sweat and humidity for a while. The idea of a steam bath has been around since the ancient Roman thermae, or bath complexes, but the notion of carrying one around under your cloak to cure your cholera has to be a case of sheer sticky hopefulness.

Todd's machine didn't take any risks, either. It involved electric shocks, which Todd thought could help cure STDs as well as stopping any illicit fiddling, but it also contained an alarm bell to alert interested parties if the person in question had, by some illicit means, actually managed an erection.

This one's rather upsetting: the First World War introduced the first large-scale cases of shell sock in soldiers who'd managed to survive the conflict, but people weren't entirely sure what it was or what to do about it. Soldiers suffering it were thought to be cowards or faking, but even if they were believed, treating their "war neurosis" in asylums often wasn't very pleasant.

Electricity-based therapy was one of the methods apparently available to help "cure" soldiers in this predicament. Yep, it was a precursor to electroshock therapy, and the Bergonic Chair, invented by Dr. Bergonic, ran electrical currents through prone soldiers with serious psychological conditions. We don't know very much about the Bergonic Chair or how widely it was used, but we can safely assume it wasn't particularly fun or helpful.

A 1935 edition of Modern Mechanix magazine carried a slightly strange anti-aging promise that puts today's cosmetics ads to shame: be made younger purely by being swung around in circles at high speed. The inventors of the Old Age Rejuvenator Centrifuge believed that "old age is our final yielding to the inevitable, resistless pull of gravity," and made the slight leap of logic that "it is necessary only to overcome gravity and you overcome all that brings you down to earth." Their idea? Put people in centrifugal beds and whirl them back to youth.

The Old Age Rejuvenator Centrifuge worked by putting its elderly customers in beds that then moved at great speed in circles around a central point, "pushing" all their youth to the tops of their bodies. Apparently. All it would have done in practice is give everybody a significant headache.

The autojektor of 1940 holds one of the most bizarre places in the history of medical invention: it was a Soviet machine alleged to allow people and animals to come back from the dead. Its one outing was in a short film called Experiments In The Revival Of Organisms , from a Moscow studio, as propaganda for the USSR's medical prowess, but it's been a cult object ever since.

The autojektor was essentially a machine that provided oxygenated blood, through a combination of oxygen chambers and pumps — but its enduring fame stems from the fact that, in the film, it's hooked up to the severed head of a dog and appears to revive it enough to respond to touch and noise. The autojektor, which was invented by the Russian doctor Sergei Brukhonenko, turned out to be a useful heart surgery tool, though whether it could be of any use reviving dead dogs is, well, very unlikely.