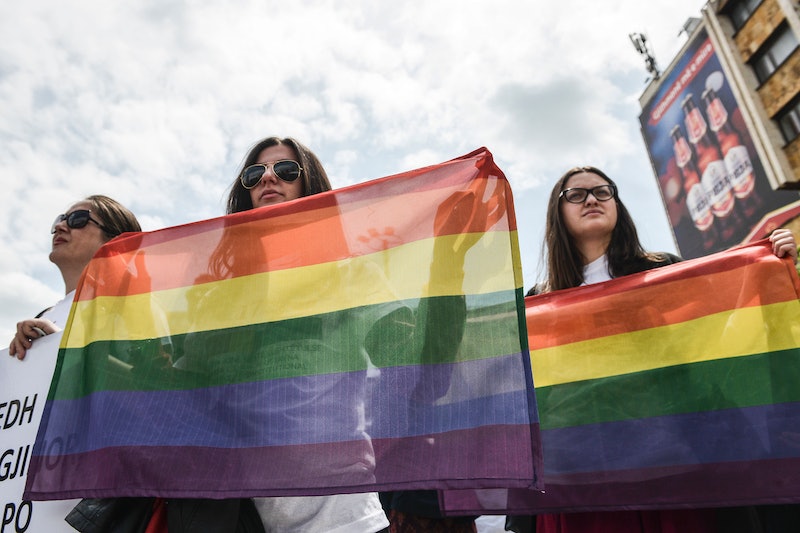 It's almost that time of year again, folks. The first day of June marks the beginning of LGBTQ Pride Month all over the world. Many LGBTQ people and allies wait all year for this one month; the streets are literally painted rainbow colors, motivational queer and trans speakers share their stories, and we are all reminded how far we've come for LGBTQ rights as a nation — and how far we have left to go.

Pride Month was designated to honor the Manhattan Stonewall Riots, which took place on June 28, 1969 at the Stonewall Inn in New York's Greenwich Village. The year following, marches to commemorate Stonewall took place in Chicago and Los Angeles; by 1971, they had spread to Boston, Dallas, Milwaukee, London, Paris, West Berlin, and Stockholm. From these marches, the Gay Pride Parade and Gay Pride events all over the world were born.

Of course, for members of the LGBTQ communities, gay pride is every month; however, it's particularly important that there's a specific time designated for it for people to reflect on and reexamine their histories, for allies to continue to learn and grow, and for people who are part of all sorts of marginalized communities to feel safe and welcome in public spaces — something which may be a rare gift for many queer and trans people.

Getting excited? Here's a handy guide showing all the ways you can prepare for Pride 2016 to make the best of your Pride Month experience.

We know Stonewall is an important moment in history for LGBTQ communities, but it's far from the only one worth knowing about. The Cooper's Donuts and Compton Cafeteria Riots in Los Angeles and San Francisco, for example, were two historical events on the West Coast. Whether you're an older trans person, a young, queer South Asian woman, a gender non-conforming Latinx person, or a white, bisexual male, you'll have histories that go deeper than you might think. Those histories are often full of pain and oppression, but it's still important to look back and understand them.

2. Look Up Your Local Pride Calendar

Many cities in the United States — both major ones and smaller ones — have Pride events between June and August; and if you're not in the United States, you can also find Pride events in the Canada, Mexico, the UK, Australia, New Zealand, parts of East Asia, parts of Europe, and a few countries in the Latin American world. The best way to find information about your local Pride events is to visit gaypridecalendar.com, where you can navigate to your country or state on the master calendar, then visit the local Pride page for more information.

Events will often be specific to the locations in which they are held; for example, in addition to the parade (which most cities who celebrate Pride Month have), there might also be block parties, dances, bar crawls, youth functions, religious events, and more. You can also purchase merchandise from the website to prepare yourself for the vibrant festivities.

3. DIY Or Buy Lots of Rainbow — And I Mean Lots

In case you didn't notice, the rainbow flag — often called the ROYGBIV flag, which stands for the order of colors in the rainbow (red, orange, yellow, green, blue, indigo, and violet) — is commonly associated with Gay Pride; it's a symbol of peace, as well as reflective of the diversity within the gay community. It's widely applied to queer, trans, and lesbian communities as well, although for those who like to get even more specific with their flags, there are dozens of LGBTQ Pride flags to denote trans, asexual, lesbian, and many other identities. Of course, the prevailing image at any Pride parade is the rainbow whether it's a giant rainbow flag waving over the festivities, people prancing about in rainbow tutus, queer superheroes wearing rainbow capes, or servers at local LGBTQ-friendly restaurants sporting rainbow bows for the day.

Don't already have a wardrobe full of rainbow-festooned items? They're easy to DIY as well. Take any white fabric you might have lying around (a spare sheet, perhaps?) and go to town with some markers; you might also decorate yourself with some rainbow makeup (this beautiful rainbow highlighter is all the rage these days, or break out the rainbow eyeliner and doodle all over yourself). Get creative!

Check to see if your local city or town has an LGBTQ Center or an HIV Clinic. These crucial spots for LGBTQ youth and adults are invaluable safe spaces, but often they rely on donations for day-to-day operations or big picture events. Many organizations frequently have booths set up at Pride where you can learn more, sign up for email lists, and sometimes even pick up some freebies. If you're not in a position where you can donate to LGBTQ organizations, though, don't worry; there are plenty of other ways to get involved. You might, for example...

You can always volunteer with one of the local organizations I mentioned above, as well as national LGBTQ organizations like GLSEN or GLAAD. If you really want to get in the Pride mood, though, most Pride events love volunteers; plus, you usually get freebies and unlimited access to events as a volunteer as an added bonus. That's of course along with the joy that comes from helping people be who they are and love who they love in a world where it's often difficult to do so.