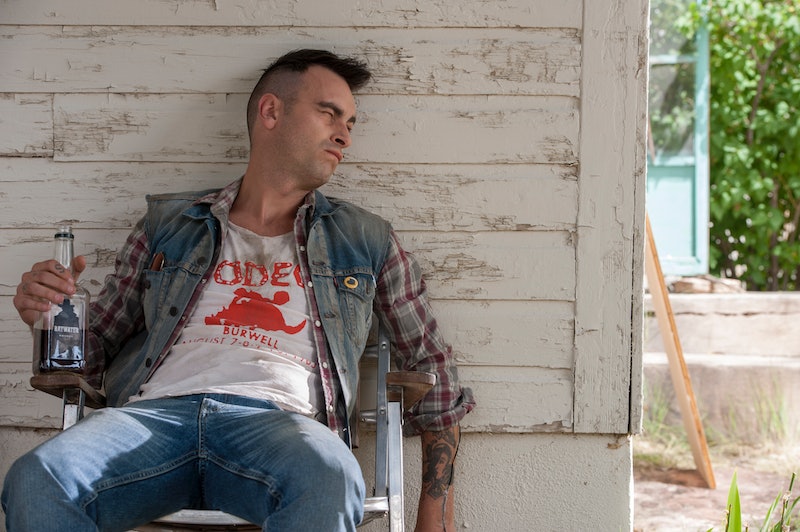 I must admit that, even though I had the entire comic run of Preacher at my disposal thanks to a husband who was a devoted fan, I quit reading it about a quarter of the way through. Even though I knew intellectually it was really good, I just didn't have the stomach for it. Parts of it were... gross. There was a nightmare-inducing grandma, a guy with his face shot inward, and something I can't even mention with an armadillo. Yet, in the midst of all that ugliness, there was one issue I found particularly beautiful: Cassidy's origin story. So, as AMC goes through its adaptation, my biggest question is: will Cassidy's Preacher comic book story be faithfully translated to TV?

Cassidy, as you already know from Preacher, is a vampire — one created before vampires somehow became Twilight/Vampire Diaries-style heartthrobs. In the comics, he — spoiler alert — gets bitten by a vampire while deserting the army during Ireland's Easter Rising with his brother. He then travels to the United States, thinking he'd rather have his family believe he's dead than know he's a vampire. The trauma of becoming a vampire — plus his extra strength and ability to heal himself quickly at night — leads him to drug use, fighting, sex work, and more. He eventually befriends Jesse and Tulip and, in a moving, almost wistful scene, tells Jesse of his past while atop the Empire State Building. (It'd be very Sleepless in Seattle, but Preacher is way to harsh too even be mentioned in the same sentence as Sleepless in Seattle.)

There's a lot of history in there. So, is the Cassidy of AMC's Preacher going to live up to that origin? TV show creators Seth Rogen and Evan Goldberg have been vocal about the fact that the show isn't a straight-up adaptation of the Garth Ennis comic, as Goldberg told Collider, “It didn’t seem, at first, that we should do it that way ... And then we talked with Garth, and Garth very much encouraged us to make a lot of small changes and to make it a good show first and foremost. Our big thing is we want fans who love the comic to get everything they want but also make some new twists and turns.”

One thing's for sure: They're going to keep Cassidy rough around the edges, to say the least. "There has been up until now quite a lot of sexy vampires," actor Joseph Gilgun, who plays Cassidy, said in an interview with The AU Review's The Iris at South by Southwest. "I'm putting a stop to that sh*t."

It does seem like Preacher is going to pull back on Cassidy's restlessness, though, and his tendency to run away when things get rough. When asked by Comic Book Resources what his favorite deviation from the comic is, Gilgun said, "What I love about it, is that it's stationary. It's been a funny one, because in the comic, they're on the move a lot, and we've had to stay very stationary. The reason being, for people who aren't aware of what Preacher is, they need to invest into these characters, and you need a bit of stillness for that to happen I think."

So Cassidy's bones from the comic are there: the violence, the gore, the super strength and vampiric and moral weaknesses. The setting has changed. How much that affects how closely the TV Cassidy resembles the Cassidy from the Preacher comics remains to be seen.