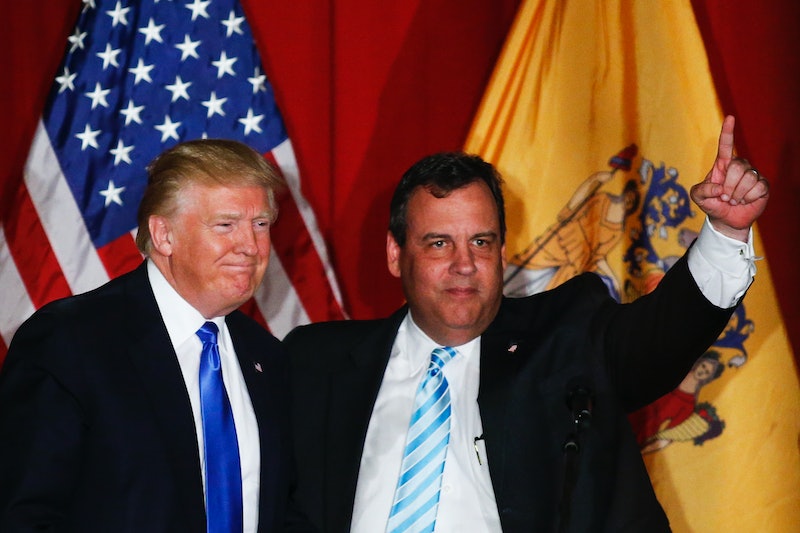 Donald Trump headlined a fundraising event for Chris Christie in New Jersey Friday to help the governor pay off debt from his failed presidential run. It's no secret that the presumptive GOP nominee often doesn't filter his words, but he proved at the Lawrenceville, New Jersey event that he doesn't mind offending anyone — even one of his most loyal political allies. When talking about boycotting Nabisco for moving a cookie factory from Chicago to Mexico, Trump told Christie not to eat Oreos anymore, mocking his "friend" — who's often the target of inappropriate jokes about his weight.

It would have been one thing for Trump to say he and Christie both pledged to stop eating the cookies, but to straight up tell Christie he can't have them in a way that insinuates he eats them constantly and might go into withdrawals is just offensive. The New Jersey governor has been very upfront about his personal struggles with his weight and often makes self-deprecating jokes about his body. That doesn't give anyone besides his doctor the right to tell him what he can or can't eat.

From a factual standpoint, it's important to note that Nabisco isn't completely packing up and abandoning the United States. One Chicago plant is downsizing — not shutting down— and two other facilities will still make Oreos in the states. So, claiming Nabisco is moving all its Oreo production to Mexico is misleading.

The same evening, Christie repeated once again how loyal he is to the billionaire-turned-politician, saying: "We never ever make a mistake by standing with your friend. And Donald Trump is my friend."

He might want to find some friends that don't body shame him in public, or at all.

Christie has been slated as a possible running mate for Trump (though Christie's approval ratings have plummeted), and he's stood by everything the candidate has done and said since he dropped out of the race himself, making it unlikely that he'll call Trump out for the comments. However, that won't stop others from criticizing the Oreos debacle. It really goes to show that Trump's rude behavior is inherent to his personality — he can't even help mocking his close allies. Not to mention, it was a rally for Christie, which just makes Trump's treatment of the governor even more sad. If he is Trump's VP pick, Christie better get used to being teased by his own teammate.