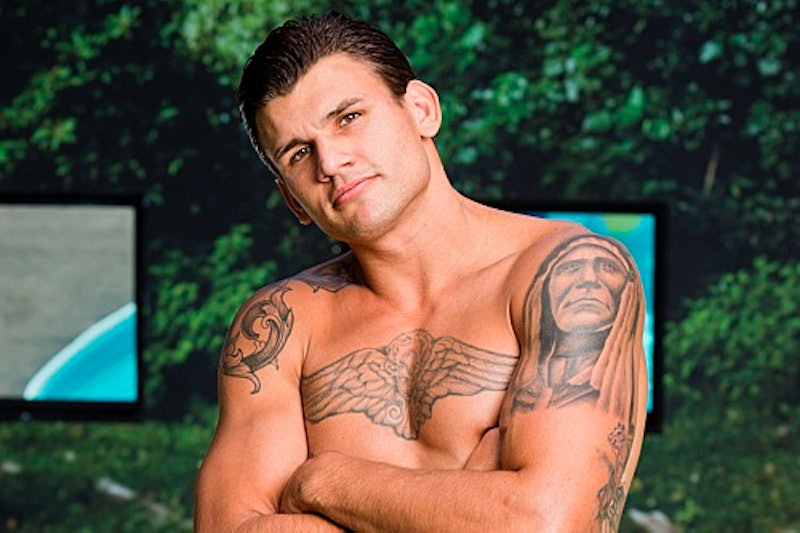 In its 15th season, Big Brother has managed to outdo itself with finding attractive, albeit self-involved, scheming, backstabbing, power-hungry, mean-spirited, delusional sociopaths. Not only is a majority of this year's cast all of those things, but a good handful of them also happen to be a bunch of horrific racists, homophobes, and sexists. Reality! TV! America!

In a season packed to the brim with villains, it's almost impossible to choose which one of these menaces to society to hate the most. Almost. Now, if you've made the decision to watch the soul-destroying Big Brother Bigotry Supercut, you already know that people like Aaryn (whose racist remarks were aired by CBS in response to all the controversy), GinaMarie, and Spencer are deplorable, downright nasty people.

(Quick note: it's sort of astonishing that, in a culture that's become more sensitive and aware of rape culture that Spencer — who said on television that "'No' means 'keep trying'" and "Blood and tears make the best lube" — isn't getting even a fraction of backlash that the unquestionably evil, hate-filled Aaryn is. Hopefully, in time, he will.)

Now, Spencer, Aaryn, and GinaMarie are in their own league of baddie: It's not even fun to hate them, it's just depressing to know that people like them still exist. Jeremy on the other hand... well, Jeremy is perhaps the most unlikable, douchey, lunkheaded villain to ever step foot in the Big Brother house. And that's really saying something. He's a sexist (seriously, Kaitlin, what self-respecting woman would touch this clown?) frat boy hell-bent on becoming a tyrant in the house.

Big Brother has had its fair share of villains before (heck, some of them had the word "Evil" put right in front of their names) but Jeremy has set a new bar for downright loathsome. Jeremy is not only the worst person on Big Brother right now, but he might be the worst person to ever appear on the show or on planet Earth. Don't believe me? Here's some hard evidence:

He Has Those Tattoos

As if Native Americans didn't have it hard enough in this country, Jeremy's idea of showing off his Cherokee heritage is to have truly awful tattoos (see: photo) and threaten to metaphorically "scalp" his fellow contestants.

Because he sort of, kind of looks like a version of Taylor Lautner in which Taylor Lautner's head was put through a vice, Jeremy has taken it upon himself to follow Jacob Black's lead and tear off his shirt at any given, random, totally unnecessary moment. He did it to try and turn on Kaitlin (blech) when they were on the couch together and then he did it during last night's episode when he won the Power of Veto challenge (BLECH!) and it's getting more cringe-worthy every time. Seriously, this guy is so terrible, he makes looking at abs a stomach-turning event.

He referred to a female contestant's privates as a "meat wallet." What a guy.

Did we mention he's a raging sexist? In addition to that "meat wallet" thing, he's referred to the women on the show as "hags" and "d*kes" and urged his showmance girlfriend Kaitlin to stop being emotional and/or have feelings. What a guy.

Oh, and he's also one of the raging house bigots. (He described getting "Jewed" by his fellow houseguests.)

Because Jeremy is the embodiment of every guy who made your life hell in middle school, he's just upholding his rep by doing things like rubbing Elissa's hat in his butt. Any day now he's going to start farting on pillows and putting people's hands in water when they sleep.

Jeremy and Aaryn clearly have it in their head that are the masters of the house, but it could — hopefully — start to backfire. Jeremy threatened his Moving Company alliance that he would turn on them if they didn't do exactly what he wanted. It was a sentiment that didn't sit well with his comrades (as McCrae pondered, "Who made you boss?") and one that will hopefully bite him in the ass.

His Inflated Sense of Self-Importance

He sure has a lot of unwarranted ego for someone credited as a "Boat Shop Associate."

Because the world is a cruel place, he won't be a Have-Not this season.

Ugh, just look into those dead, beady eyes and say you don't totally loathe this tool, too? Good for Elissa for at least trying to get rid of this chump.

Jeremy is the very embodiment of what can make a reality shows a nightmare. Sure, you need the moronic, mean-spirited "hotties" in the mix, but don't they have to be in the least bit interesting or even fun to be worthwhile? If you ran into this jerk at a bar, you'd run for your life, not think, "I wonder what this arrogant, ugly-hearted egomaniac will do next?" Hopefully, in this case, it's get kicked off the show sooner than later so we can all get back to our regularly scheduled programming.

More like this
Kourtney & Travis Crashed His Daughter’s TikTok Live In Their 2nd Wedding Outfits
By Grace Wehniainen
When Was 'Bling Empire' Season 2 Filmed?
By Alyssa Lapid
Everything To Know About A Potential 'Love On The Spectrum U.S.' Season 2
By Gretchen Smail
There's One Big Reason Bru & Alyssa Aren't Dating After 'The Circle'
By Gretchen Smail
Get Even More From Bustle — Sign Up For The Newsletter