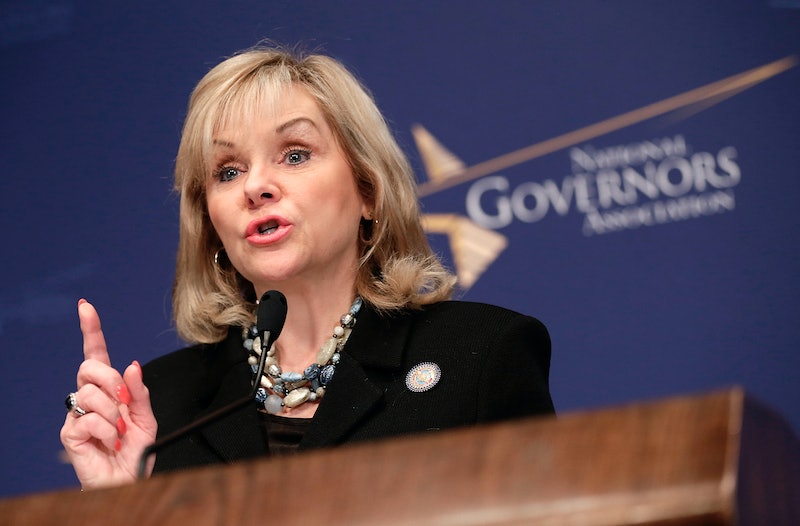 At the moment, the national political world is in the thick of that awkward, late-in-the-primaries stretch of time, when the race seems to slow down. Which makes it a ripe time for speculation about who each party's clear nominee ― Donald Trump for the Republicans, and Hillary Clinton for the Democrats (contrary to what you may have heard) ― might pick to be their number two. And given some recent, high-profile, hyper-controversial developments in the state of Oklahoma, here's one to consider: Is Mary Fallin positioning herself to be vice president? Update: On Friday, Fallin vetoed the controversial Oklahoma anti-abortion bill.

Fallin, 61, has been the governor of the Sooner State since 2011, having rode into the statehouse amid the blood-red wave of the 2010 midterm elections — the cycle that, more than any other, brought the Tea Party and its insurgent Republicans to power. A nice match for Trump's (initially) hostile takeover of the GOP, right? They even have endorsements from Sarah Palin in common!

And Fallin's name has re-emerged in the national news cycle in a big way recently, albeit for a reason that probably won't rally many independents to her side ― she's currently considering signing a bill into law criminalizing abortion doctors, making it a felony to terminate a pregnancy with possible jail time of up to three years.

The strategy, just like the state of Texas' onerous TRAP laws (targeted regulation of abortion providers), is pretty clear: Constitutional right or not, Republican-run states are trying to end abortion through attrition, slowly making it hard enough to provide them that safe, experienced practitioners will fall away. This won't stop abortion, obviously, so much as force women into more dangerous, medically unsanctioned methods.

She's also drawn sharp criticism for her stewardship of Oklahoma's capital punishment ― like many states, it's having to turn to increasingly obscure and secretive sources to get lethal injection drugs, and a series of botched, inhumane executions have brought Fallin's decision-making into severe question.

But these aren't necessarily downsides for a prospective Republican vice president ― one of the reasons Trump's ascendancy was so shocking is that he managed to do it without some of the usual hardline conservative positions, especially on abortion and Planned Parenthood. Obviously, this is less essential now that he's already cleared the primary hurdle. Breaking rightwards on reproductive rights might therefore seem like a strange idea at this point, except as a signal to the Republican establishment that he's hitching himself more thoroughly to the party's brand by picking a staunchly conservative governor (in other words, not Chris Christie).

Also, perhaps needless to say, Fallin is a woman. While that calculation might seem incredibly cynical, especially from somebody with Trump's record of sexism, it's almost definitely on his mind when he sees dismal poll numbers like these. A qualified woman with executive experience could be a benefit, in other words, and although somebody like South Carolina's Nikki Haley would probably better fit the bill, Trump has already ruled her out.

Of course, this is all idle speculation unless there were a way to get inside Trump's head about this, and by virtue of his being an erratic, power-hungry loose cannon, that's about as tough a job as exists in politics today. For what it's worth, Trump did thank and praise South Carolina's lieutenant governor, Andre Bauer, for suggesting Fallin for his VP in a CNN appearance last month. And don't underestimate the importance of that ― after all, Trump is the same candidate who told NBC's Chuck Todd last that he got his foreign policy views from "the shows."

More like this
Are John Legend & Kanye West Still Friends? The Singer’s Latest Update Is Candid
By Brad Witter
'Scream’s Courteney Cox Has Broken A Major Horror Record
By Sophie McEvoy
The 5 Best Underwear For Preventing Wedgies
By Lisa Fogarty
Beyoncé & Madonna’s “Break My Soul” Remix Honors A Group Of Black Icons
By Stephanie Topacio Long
Get Even More From Bustle — Sign Up For The Newsletter