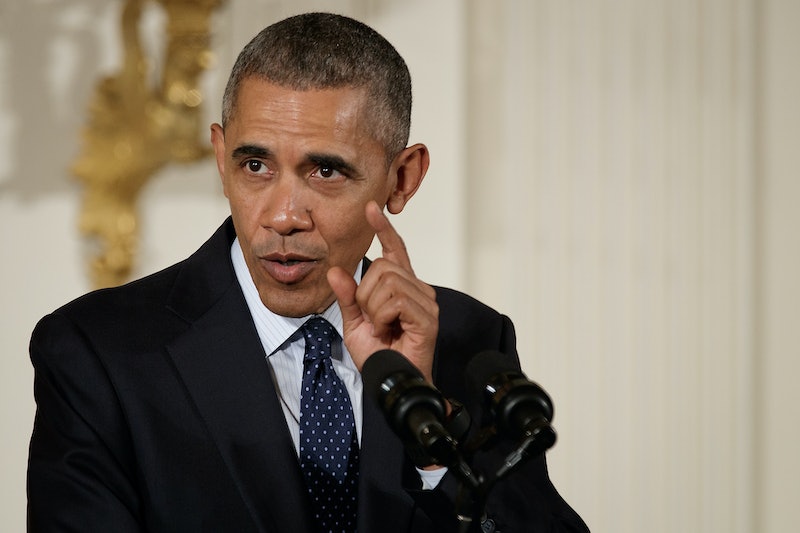 On Thursday night, the Oklahoma state legislature filed a measure calling for the impeachment of President Barack Obama. According to Reuters, the Republican-dominated legislature is considering a bill that calls the Oklahoma members of the U.S. House of Representative to file articles of impeachment against the president, as well as Attorney General Loretta Lynch, Secretary of Education John King, Jr., and multiple others. The source of the Oklahoma politicians' frustration with Obama and other federal officials is his administration's directive that public schools allow transgender students to use the bathrooms of their choice.

As ThinkProgress noted, the measure states:

Oklahoma state legislators cannot, in fact, impeach the U.S. president, which is why an alternative (of sorts) is to file a formal measure to push then state's federal representatives to do so. John Bennett, a Republican state representative, said in a statement that Obama's transgender student directive was "biblically wrong." On Thursday night, a measure was also introduced and could be considered possibly Friday to allow student to "claim a religious right to have separate but equal bathrooms and changing facilities to segregate them from transgender students," noted the Reuters report.

"Oklahomans are simply not going to stand for this utter nonsense" and the "attempt to use our children as pawns in a liberal agenda," Bennett said in a statement, according to the Associated Press. "We are going to do everything we can to protect our women and children."

Earlier on Thursday, the Oklahoma Senate approved legislation that would make performing an abortion a felony, punishable by up to three years in prison.