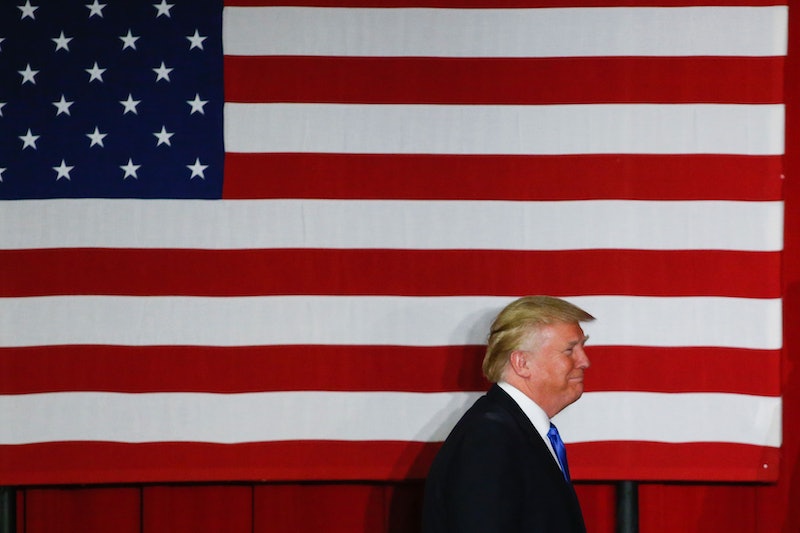 After The New York Times published an in-depth story chronicling Trump's sexist behavior with women he's worked with or interacted with — accusations that the GOP front-runner denies — most people didn't bat an eye. So, when Republican National Committee Chair Reince Priebus told ABC News' Jonathan Karl, "I think that all these stories that come out, and they come out every couple weeks, people just don't care," he was pretty accurate. In an epically-long Twitter thread Friday, Vox writer David Roberts perfectly explained America's Trump-related outrage fatigue and how it mimics the Bush administration.

"Watching the media try to cover the Trump Show, I am reminded of what it was like back in, say, 2003, trying to cover the Bush admin," Roberts' tweets started out, referring to Bush's post-9/11 presidency and the start of the Iraq War. "Every day — and that's barely an exaggeration — the Bush admin. would do or try something outrageous and horrible." He goes on to explain that any one of the awful incidents would have been worth weeks of coverage and a "national conversation," but that wasn't possible because there were just too many.

"This came to be known as 'outrage fatigue.' It made it difficult for political opposition to fight, difficult for media to cover," he said.

This is completely opposite Hillary Clinton's campaign, which gives the media plenty of time to unpack each mess-up because they're so few and far between. "Clinton is more of a typical politician, w/ reasonably mainstream views & a high degree of message discipline. So when she slips up ... w/ a 'gaffe' like the one on coal miners, there's plenty of time for reporters to lovingly toy w/ it, really make it into a Thing," Roberts tweeted, adding that her e-mail scandal was the same way.

With Trump, reporters and voters alike don't have time to ponder one mishap because there are always three more immediately popping up, diverting attention from the first. "And I feel pretty confident a Trump administration would be the same, like Bush's: more outrages than there is capacity to be outraged," Roberts wrote.

The media clearly hasn't grappled with the problem, since it's just a repeat of 2003. Roberts ended the thread by urging young reporters and writers to figure out a way to deal with the constant influx of content rather than simply enjoying all the traffic it brings to their sites, because if Trump does become president, it won't end. "You do not want to spend 4 or (shudder) 8 yrs covering an unending stream of country-degrading ugliness." he warned. "Those orange circus peanuts... may be tasty at first, but trust me, they get old. Better to grapple w/ this now, figure it out now, than get trapped in it later."

Roberts didn't have a solution, but pointed out a serious media problem surrounding the 2016 election that will only spiral out of control (if it hasn't already). The media can't cover Trump the same way it covers other politicians because he's not an ordinary politician.