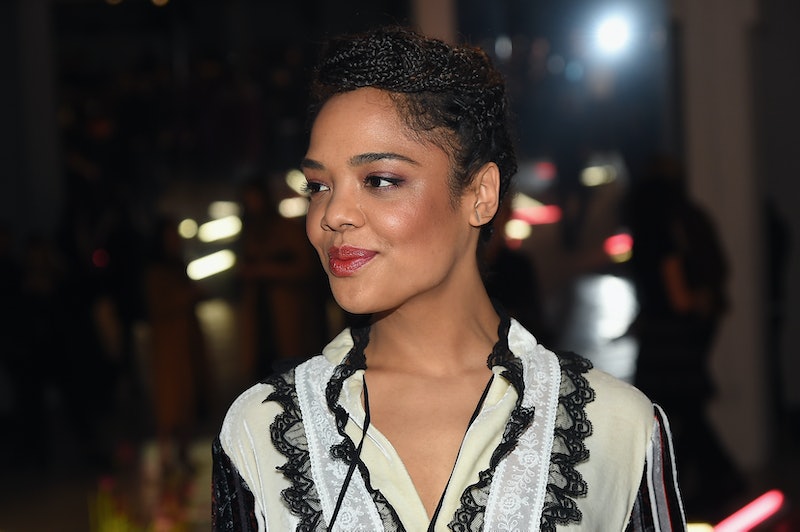 If you weren't already excited for the upcoming Thor film, Thor: Ragnarok, get ready: This should definitely do the trick. Because, according to reports released Friday, Thor: Ragnarok 's cast includes Tessa Thompson as a character called Valkyrie. But not just Tessa Thompson, as Jeff Goldblum is slated to play an Asgardian game-playing elder known as the Grandmaster and Cate Blanchett will play Loki's (Tom Hiddleston) daughter, Hela, the villainous ruler of the realms of the dead (As a huge Hiddlestoner, I'm more than a little excited to see a Tom Hiddleston/Cate Blanchett collaboration.)

It's so exciting that Asgard has such bad*ss ladies hanging around. We won't get to see Jamie Alexander as Lady Sif or Natalie Portman as Thor's human lady, Jane in Ragnarok but we can assume that even without them it's going to be a girl-powered version of lit. Ladies as villains, ladies as warriors, ladies as scientists: Thor's mythology has it all. But what's up with Valkyrie, the character Tessa Thompson will play and what sort of a role will she play in Ragnarok?

In Norse mythology, the valkyries are the women who decide who lives and who dies in battle. They take their dead to Valhalla to chill with Odin in BraveDeadWarriorville. Meanwhile, this specific Valkryie from Thor is based on the Norse character Brynhildr. Brynhildr decided a battle, and Odin disagreed with the outcome of the event, so he forced her to live the life of a mortal woman and imprisoned her.

In the world of Thor comics, the character Valkryie is one of the "Defenders of Asgard" and an Odin-appointed leader of the Valkyrior. She is not immortal, but is super strong with super stamina and incapable of catching human diseases so she'll live a long time. Valkyrie can perceive the approach of death, and sees a "deathglow" surrounding a person's body but doesn't know how they will die. She can also body jump herself into a dying or dead body to and from the realm of the dead which sounds pretty useful when fighting a battle against Hela, a ruler of the realms of the dead.

This will be Thompson's first foray into being a superhero-type character, and I am beyond excited to see what she'll do. Get it, Tessa T!