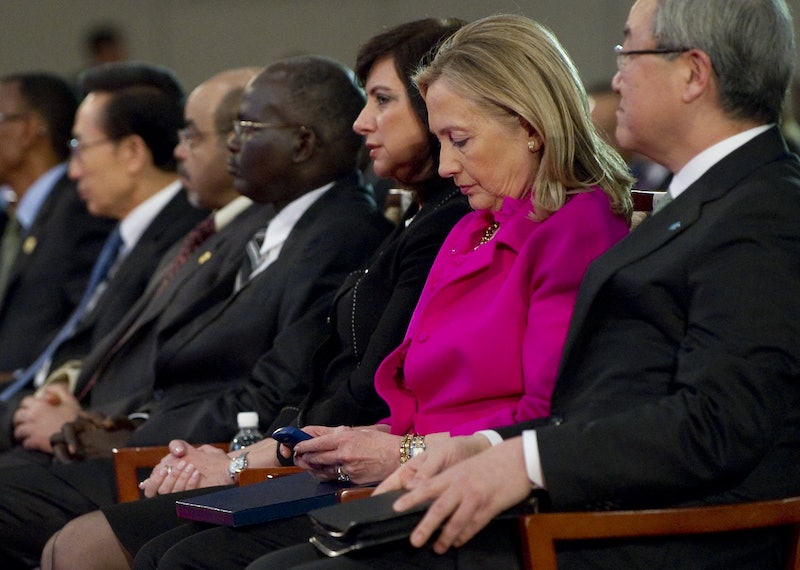 When presidential candidates make mistakes, the Internet does more than just laugh at them — it crucifies them. Such was the case Friday when Democratic front-runner Hillary Clinton's campaign released a Venn diagram on gun control that had everyone crying foul. The confusing and poorly designed graph was quickly torn to shreds over social media networks after it was posted to Clinton's official Twitter account, proving once again you should always think before you tweet.

Clinton's disaster of a Venn diagram showed one circle labeled "90 percent of Americans" overlapping slightly with another circle of equal size labeled "83 percent of gun owners." The overlapping area was labeled "support universal background checks." In tweeting the graph, Clinton's campaign was most likely attempting to make the argument that the majority of Americans, including a large majority of gun owners, support universal background checks. Unfortunately for Clinton the data point and wasn't well-suited to a Venn diagram to begin with, and even worse, her campaign didn't draw a graph that was an accurate representation of her claim.

"The chart completely fails at the basic elements of being a Venn diagram," Business Insider's Andy Kiersz wrote in what is perhaps the most succinct and fitting critique of Clinton's awkward graph.

The Venn diagram dropped onto the web by Clinton's campaign is problematic in a few ways. As you can see it appears to suggest that not all of the gun owners Clinton is referencing in her argument are Americans. Because, in this case, all of the gun owners in question are Americans the graph should be depicted as a circle within a circle. But given the function of a Venn diagram — to represent all logical intersections between two or more distinct data sets — Clinton shouldn't have used a Venn diagram to drive her point home at all.

It's not clear why Clinton's campaign thought this particular Venn diagram was the way to go about arguing for increased gun control reform, but Clinton is no stranger to being the butt of jokes and she'll ride out "Venngate," or "Vennghazi" as one clever Twitter user dubbed it, much like she's ridden out most of the controversies that have dogged her political career.

While the Internet rarely forgives, it does forget. So Clinton can rest easy knowing the great tidal wave of Internet outrage will likely flow in someone else's direction tomorrow. That is until it finds its way back to her again.