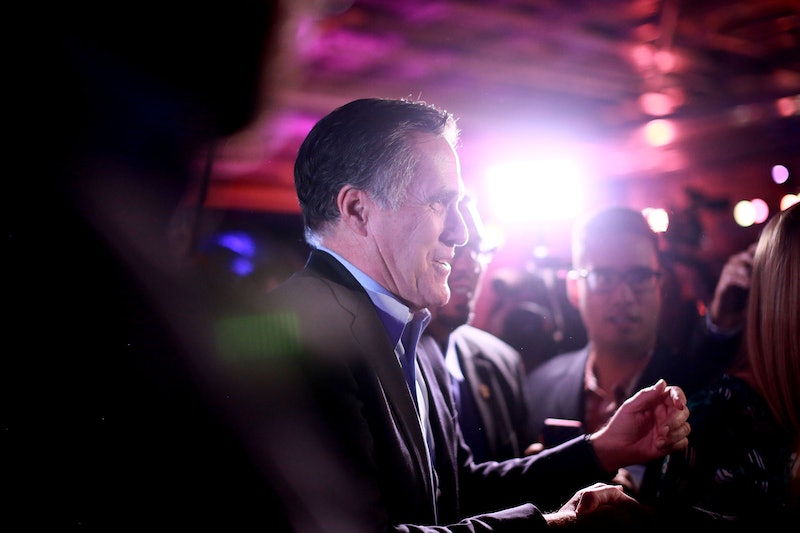 The Republican Party may be warming up to Donald Trump, but not everybody in the GOP is convinced. Conservative pundit Erick Erickson, an influential and vocal member of the #NeverTrump movement, said on Friday that Mitt Romney should run a third-party campaign for president, and he's not the only conservative to make this suggestion. Thanks to Trump and the havoc he's wreaking on the GOP, a lot of Republicans really, really miss Romney right about now, a remarkable turnaround from four years ago.

"I can’t believe I’m even writing this," Erickson wrote on Friday. "But seriously, Mitt Romney should run for President again and transcend party for the good of the country." The conservative blogger added that he'd "gladly work for a Romney Presidency [sic] given the choices between Clinton and Trump."

Erickson, who opposed Romney in 2008 and 2012, isn't the only conservative who's started looking back wistfully on the former Massachusetts governor. Reihan Salam made the argument for Romney at Slate, saying that Romney "would be a formidable candidate if he chose to join the campaign, and he would give anti-Trump conservatives a reason to fight this fall." Weekly Standard editor Bill Kristol has also proposed that Romney run again, and the two even met one-on-one to discuss the possibility of a third-party challenge to Trump.

Romney, for his part, says that he isn't interested in running again. What's fascinating, though, is how drastically Romney's reputation has improved within the GOP, and among conservatives, in just a couple of years.

During the 2012 primary, Romney's perceived centrism and lack of conservative bona fides led some on the right to launch an "anyone but Romney" movement to prevent him from winning the nomination. Later, Republicans criticized his general campaign for its ineptness, and his loss to President Obama in the general election cemented his status as a loser in the GOP.

But then, due to events largely beyond Romney's control, his standing in the GOP began to tick upward. In 2014, Russia invaded Ukraine, which led to a serious escalation in U.S.-Russia tensions. To many in the GOP, this appeared to retroactively confirm Romney's 2012 claim that Russia was America's "number one geopolitical foe," a remark that was derided at the time. Several more of Romney's 2012 comments started looking a lot better in hindsight, including his warnings about terrorist activities in Mali and suggestion that Detroit should undergo bankruptcy.

By the time Trump took over the Republican Party, Romney's rehabilitation was complete. Compared to the mean-spirited, bigoted, and fascistic reality TV host, Romney appeared positively statesmanlike and reasonable. His (unsuccessful) efforts to stop Trump later in the campaign only bolstered his standing among anti-Trump Republicans.

Whether Romney will actually run is another question entirely. But the fact that he's practically being begged to do so is a reminder that even two-time failed presidential candidates sometimes have one more comeback left in them.