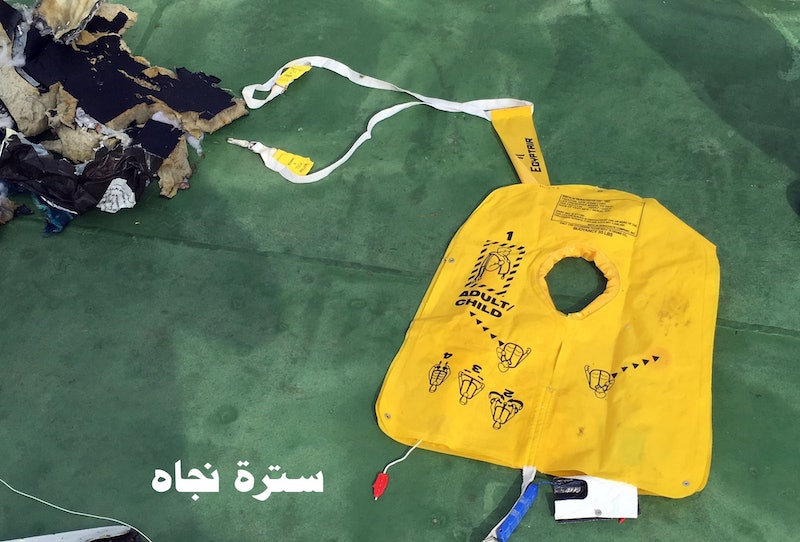 The Egyptian military has released the first photos of the EgyptAir wreckage, two days after the airliner carrying 66 passengers and crew members plunged into the Mediterranean Sea en route to Cairo. The images were posted on the Facebook page of an Egyptian military spokesperson, who confirmed in a post that these pieces of debris are from EgyptAir Flight 804. Search missions for the missing Airbus A320 are still underway in the Mediterranean, but the Egyptian government has said there's no hope of finding survivors.

Yellow inflatable life vests, colorful fabric and chunks of distorted metal were among the wreckage documented in the photos. Some of the wreckage was emblazoned with the EgyptAir logo; other pieces of debris appeared to be passengers' belongings, including a baby's blanket. The Egyptian military confirmed on its website and Facebook pages that passenger belongings were discovered along with what appears to be parts of the jetliner's fuselage.

CNN was the first news outlet to report that flight data revealed EgyptAir Flight 804 issued automated smoke alerts, signaling a problem in the front of the aircraft. An Egyptian source told CNN that the smoke alerts were issued just minutes before the plane crashed. A spokesperson for France's accident investigation agency confirmed to the news outlet that the plane sent out these messages, but investigators still cannot say what caused the smoke. Terrorism has not been ruled out by the Egyptian, French, or U.S. governments, but no terrorist group has claimed responsibility for the crash.

In addition to the images, the Egyptian military released a video on Saturday documenting the wreckage. A shoe, a life vest, and pieces of foam, which appear to be from the cabin seats, can also be seen among the discovered debris.

On Friday, EgyptAir released a statement confirming that debris from Flight 804 has been located:

EGYPTAIR Official said that Egyptian Military and Marine Forces have discovered more debris, passengers’ belongings, body parts, luggage, and aircraft seats. Search is still in progress. Those concerned about missing relatives or friends who may have been on board are invited to call 080077770000 within Egypt Or +20225989320 international.

The airline added in a Facebook post late on Friday that the Egyptian military will "still continue searching for the remains of the fuselage."